Once a medication is initiated, it is gradually increased to a therapeutic level. 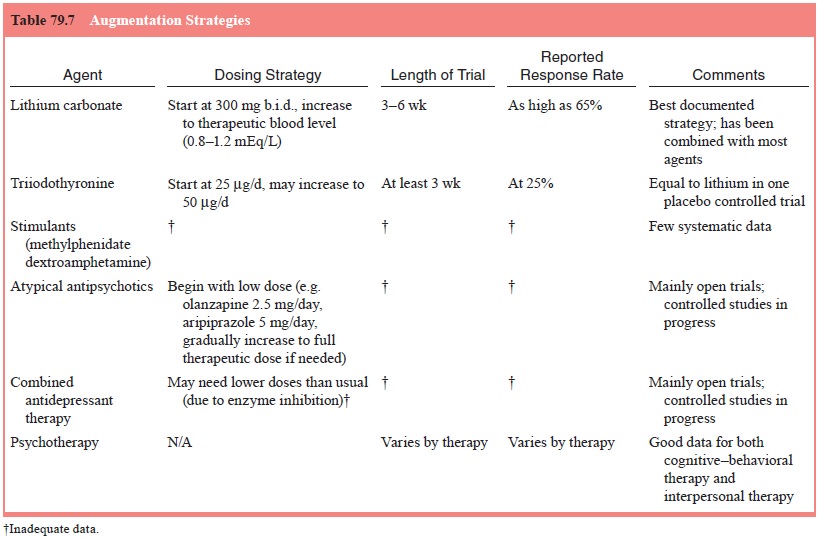 TCAs are usually begun at a relatively low dose. For the major-ity of TCAs, including imipramine, amitriptyline, desipramine, maprotiline and doxepin, the initial starting dose is in the range of 50 to 75 mg/day. Notable exceptions include nortriptyline and protriptyline, which are more potent agents. In the case of nortriptyline, the usual starting dose is 25 to 50 mg/day, and for protriptyline, 10 to 15 mg/day (Schatzberg and Cole, 1991). The lower doses are preferred in patients who are elderly. In the frail elderly, further dose reductions may be needed (about one-half or less of the usual starting dose).

Once a medication is initiated, it is gradually increased to a therapeutic level. A number of strategies have been suggested for this increase. Most TCAs can be increased to 150 mg/day by the second week, and then to a range of 300 mg/day by the third or fourth week. This can be achieved through small daily increase of 25 mg or weekly increase of 75 mg. Younger patients will tolerate larger and more rapid increases, whereas the elderly benefit from smaller (25 mg/day) and less frequent (every other day) increases with a lower target dose (150 mg/day).

For nortriptyline, increases of 50 mg/week are usually tolerated in the young, with the elderly requiring smaller increases (25 mg/week). Of particular interest is nortriptyline’s therapeutic window: doses above and below a certain range appear to be less effective. The effective range is approximately 50 to 150 mg/day. Some authors suggest a lower range (for example, from 30 to 100 mg (Brotman et al., 1987); however, plasma blood monitoring is a more accurate indicator of the proper level.

Although dosing strategies are less well understood with these agents, the wisest choice is to start a patient at the lowest effective dose and increase as indicated by clinical response. Reasonable doses are 20 mg/day for fluoxetine, 50 mg/day for sertraline, 20 mg/day for paroxetine and citalopram. For children, adolescents, the elderly and patients who find medications generally difficult to tolerate, 50% reductions in these doses are reasonable starting doses.

A number of studies have shown increasing response with increasing doses of SSRIs (Leonard, 1993), but the dropout rate due to side effects also increases with increasing dose. Fluoxetine, paroxetine and citalopram should be started at a dose of 10 or 20 mg for 3 weeks (20 mg for a normal healthy adult, 10 mg for patients who are young, elderly, or particularly sensitive to medications), after which they can be increased in 10 or 20 mg increments to a dose of 40 mg/day if there is no response. A maximum dose of 60 mg/day of fluoxetine is recommended for the treatment of depression. A similar strategy can be used for sertraline, which can be begun at 25 to 50 mg, and increased in 25 to 50 mg increments to a target dose of 50 to 150 mg. Other disorders, particularly OCD and bulimia nervosa, may require 80 mg/day or more for maximal effect. The issue of dosage for SSRIs remains complicated, as some studies have suggested that fluoxetine may not have a linear dose–response curve; some patients may respond better to lower doses of the medication, such as 10 mg/day (Leonard, 1993). Other studies have documented responses to fluoxetine at incredible doses and blood levels (320 mg/day and over 2000 ng/mL, respectively) without adverse effects (Stoll et al., 1991).

As with tricyclic medications, there is a significant delay between initiation of medication and response, and there is no reason to believe that increasing the dose hastens response.

Trazodone is generally dosed in a manner similar to TCAs, with starting doses of 50 to 75 mg/day, and target ranges of 150 to 300 mg/day, with doses not exceeding 400 mg/day in outpatients and 600 mg/day in inpatients. Unlike many of the TCAs, trazo-done’s short half-life requires divided doses, usually twice daily.

Bupropion, like trazodone, requires divided doses. It is available in a short acting form that requires three times a day dosing, or a longer acting form that allows twice-daily dosing. It should be begun at 100 mg b.i.d., and increased to a target of 300 mg/day after a few days. The recommended dose of the medication is 300 mg/day; however, patients not responding to that dose can be increased to 450 mg/day. Patients should be in-structed to avoid taking more than 150 mg in a single dose. In the elderly, a usual starting dose is 75 mg/day of the shorter acting preparation. This is then increased to 75 mg b.i.d.

It is currently available in a slow release preparation that ena-bles once-daily dosing. Venlafaxine is usually begun at a dose of 37.5 mg and is increased within half to 1 week to a dose of 75 mg. If further increases are needed, it can be titrated at a rate of 75 mg every 4 days or more. Though a maximum dose of 225 mg per day is recommended by the manufacturer, doses as much as 300 to 450 mg/day have been employed to good effect in some patients.

It is available in 20, 30, and 60 mgm capsules. Starting dose is usually 20 mg twice a day. Maximum recommended effective dose is 60 mgm/day.

Adults should be started on a dose of 15 mg/day. It is usually given as a before bedtime dose. The dosage generally needs to be increased in 15-mg intervals every half to 1 week to a target dose. The effective dose is usually between 15 and 45 mg/day; however, higher doses, such as 60 mg have been useful in some patients.

Nefazodone is given in twice-daily doses. Patients can be started at a dose of 100 mg b.i.d. and increased at a rate of 100 to 200 mg a week. The recommended effective dose is 300 to 600 mg/day. Some clinical experience suggests that once-daily doses (given at night) are acceptable for some patients (Marathe et al., 1996).

Although blood levels are available for many antidepressants, those for imipramine, desipramine, and nortriptyline have been best established (see Table 79.6). Imipramine and desipramine appear to have a curvilinear dose–response curve with an opti-mal range of 150 to 300 ng/mL. Nortriptyline appears to have a therapeutic window in the range of 50 to 150 ng/mL (Preskorn et al., 1993). These blood levels are nominal, as some patients do respond above or below these ranges, and blood level monitoring should not be a substitute for clinical observation.

Drug levels have not been well established for the MAOIs and the serotonin reuptake inhibitors.

Typical augmentation strategies (Table 79.7) include the addition of lithium carbonate, thyroid hormone, or a stimulant. These may be considered when response is inadequate to initial treatment using an adequate dose for an adequate time of a single agent.

Changing to a New Agent

For the patient who shows no response or whose condition dete-riorates during therapy, the physician should initiate a new trial of an alternative single agent. There remains some debate as to what type of agent should be used next. Some studies have suggested that patients who do not respond to one SSRI may respond to another (Thase et al., 1997). However, the most convincing study continues to support the more commonly held belief that it is best to switch to an agent of a different class, and approximately 50% of patients unresponsive to a first trial respond to an antidepressant of a differ-ent class (Phillips and Nierenberg, 1994; Thase et al., 2002).

When the switch involves an MAOI, sufficient time must be given for medication clearance. Although seldom used, MAOIs may be very effective in patients not responsive to other classes of antide-pressants (McGrath et al., 1993). Generally, 10 to 14 days for either medication is required for clearance of TCAs and MAOIs. Fluoxet-ine requires a much longer period – 6 weeks – whereas sertraline and paroxetine require about 2 weeks when switching to an MAOI.