One group of cholinergic antagonists has already been discussed: the nondepolarizing neuromuscular-blocking agents.

One group of cholinergic antagonists has already been discussed: the nondepolarizing neuromuscular-blocking agents. These drugs act primarily at the nicotinic receptors in skeletal muscle.

Anticholinergics are esters of an aromatic acid combined with an organic base ( Figure 13–1). The ester linkage is essential for effective binding ofthe anticholinergics to the acetylcholine receptors.

This competitively blocks binding by acetylcho-line and prevents receptor activation. The cellulareffects of acetylcholine, which are mediated through second messengers, are inhibited. The tissue recep-tors vary in their sensitivity to blockade. In fact, muscarinic receptors are not homogeneous, and receptor subgroups have been identified including: neuronal (M1), cardiac (M2), and glandular (M3) receptors. 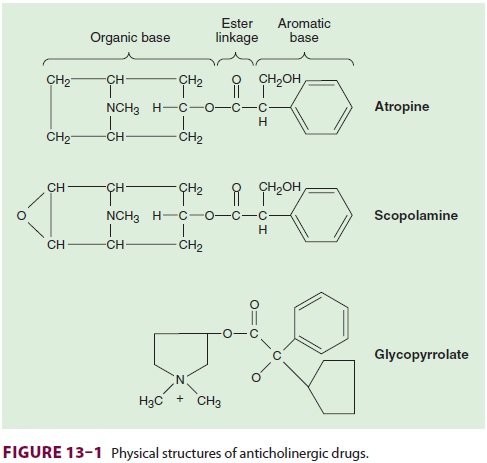 Blockade of muscarinic receptors in the sinoatrial node produces tachycardia. This effect is especially useful in reversing bradycardia due to vagal reflexes (eg, baroreceptor reflex, peritoneal traction, or ocu-locardiac reflex). A transient slowing of heart rate in response to smaller intravenous doses of atropine (<0.4 mg) has been reported. The mechanism of this paradoxical response is unclear. Facilitation of conduction through the atrioventricular node short-ens the P–R interval on the electrocardiogram and often decreases heart block caused by vagal activity. Atrial arrhythmias and nodal (junctional) rhythms occasionally occur. Anticholinergics generally have little effect on ventricular function or peripheral vas-culature because of the paucity of direct cholinergic innervation of these areas despite the presence of cholinergic receptors. Presynaptic muscarinic recep-tors on adrenergic nerve terminals are known to inhibit norepinephrine release, so muscarinic antag-onists may modestly enhance sympathetic activity. Large doses of anticholinergic agents can result in dilation of cutaneous blood vessels (atropine flush).

The anticholinergics inhibit the secretions of the respiratory tract mucosa, from the nose to the bron-chi, a valuable property during airway endoscopic or surgical procedures. Relaxation of the bron-chial smooth musculature reduces airway resistance and increases anatomic dead space. These effects are particularly pronounced in patients with chronic obstructive pulmonary disease or asthma.

Anticholinergic medications can cause a spectrum of central nervous system effects ranging from stimula-tion to depression, depending on drug choice and dos-age. Cerebral stimulation may present as excitation, restlessness, or hallucinations. Cerebral depression, including sedation and amnesia, are prominent after scopolamine. Physostigmine, a cholinesterase inhibi-tor that crosses the blood–brain barrier, promptly reverses anticholinergic actions on the brain.

Anticholinergics cause mydriasis (pupillary dila-tion) and cycloplegia (an inability to accommodate to near vision); acute angle-closure glaucoma is unlikely following systemic administration of most anticholinergic drugs.

Anticholinergics may decrease ureter and bladder tone as a result of smooth muscle relaxation and lead to urinary retention, particularly in elderly men with prostatic hypertrophy.

Inhibition of sweat glands may lead to a rise in body temperature (atropine fever).