Clinically effective antimicrobial agents all exhibit selective toxicity toward the para- site rather than the host, a characteristic that differentiates them from the disinfectants .

Clinically effective antimicrobial agents all exhibit selective toxicity toward the para- site rather than the host, a characteristic that differentiates them from the disinfectants . In most cases, selective toxicity is explained by action on microbial processes or structures that differ from those of mammalian cells. For example, some agents act on bacterial cell wall synthesis, and others on functions of the 70 S bacterial ribosome but not the 80 S eukaryotic ribosome. Some antimicrobial agents, such as penicillin, are essentially nontoxic to the host, unless hypersensitivity has developed. For others, such as the aminoglycosides, the effective therapeutic dose is relatively close to the toxic dose; as a result, control of dosage and blood level must be much more precise.

•       Antibiotic—antimicrobials of microbial origin, most of which are produced by fungior by bacteria of the genus Streptomyces.

•       Antimicrobial, antimicrobic—any substance with sufficient antimicrobial activitythat it can be used in the treatment of infectious diseases.

•       Bactericidal—an antimicrobial that not only inhibits growth but is lethal to bacteria.

•       Bacteriostatic—an antimicrobial that inhibits growth but does not kill the organisms.

•       Chemotherapeutic—a broad term that encompasses antibiotics, antimicrobials, anddrugs used in the treatment of cancer. In the context of infectious diseases, it implies the agent is not an antibiotic.

•       Resistant—organisms that are not inhibited by clinically achievable concentrations ofa antimicrobial agent.

•       Sensitive—term applied to microorganisms indicating that they will be inhibited byconcentrations of the antimicrobic that can be achieved clinically.

•       Susceptible—term applied to microorganisms indicating that they will be inhibitedby concentrations of the antimicrobic that can be achieved clinically.

There are several sources of antimicrobial agents. The antibiotics are of biological origin and probably play an important part in microbial ecology in the natural environment. Peni-cillin, for example, is produced by several molds of the genus Penicillium, and the prototype cephalosporin antibiotics were derived from other molds. The largest source of naturally occurring antibiotics is the genus Streptomyces, the members of which are Gram-positive, branching bacteria found in soils and freshwater sediments. Streptomycin, the tetracyclines, chloramphenicol, erythromycin, and many other antibiotics were discovered by screening large numbers of Streptomyces isolates from different parts of the world. Antibiotics are mass produced by techniques derived from the procedures of the fermentation industry.

Chemically synthesized antimicrobial agents were initially discovered among com-pounds synthesized for other purposes and tested for their therapeutic effectiveness in an-imals. The sulfonamides, for example, were discovered as a result of routine screening of aniline dyes. More recently, active compounds have been synthesized with structures tailored to be effective inhibitors or competitors of known metabolic pathways. Trimetho-prim, which inhibits dihydrofolate reductase, is an excellent example.

A third source of antimicrobial agents is molecular manipulation of previously dis-covered antibiotics or chemotherapeutics to broaden their range and degree of activity against microorganisms or to improve their pharmacologic characteristics. Examples in-clude the development of penicillinase-resistant and broad-spectrum penicillins, as well as a large range of aminoglycosides and cephalosporins of increasing activity, spectrum, and resistance to inactivating enzymes.

The spectrum of activity of each antimicrobic describes the genera and species against which it is typically active. For the most common antimicrobics and bacteria, these are shown in Table 13-1. Spectra overlap but are usually characteristic for each broad class of antimicrobic. 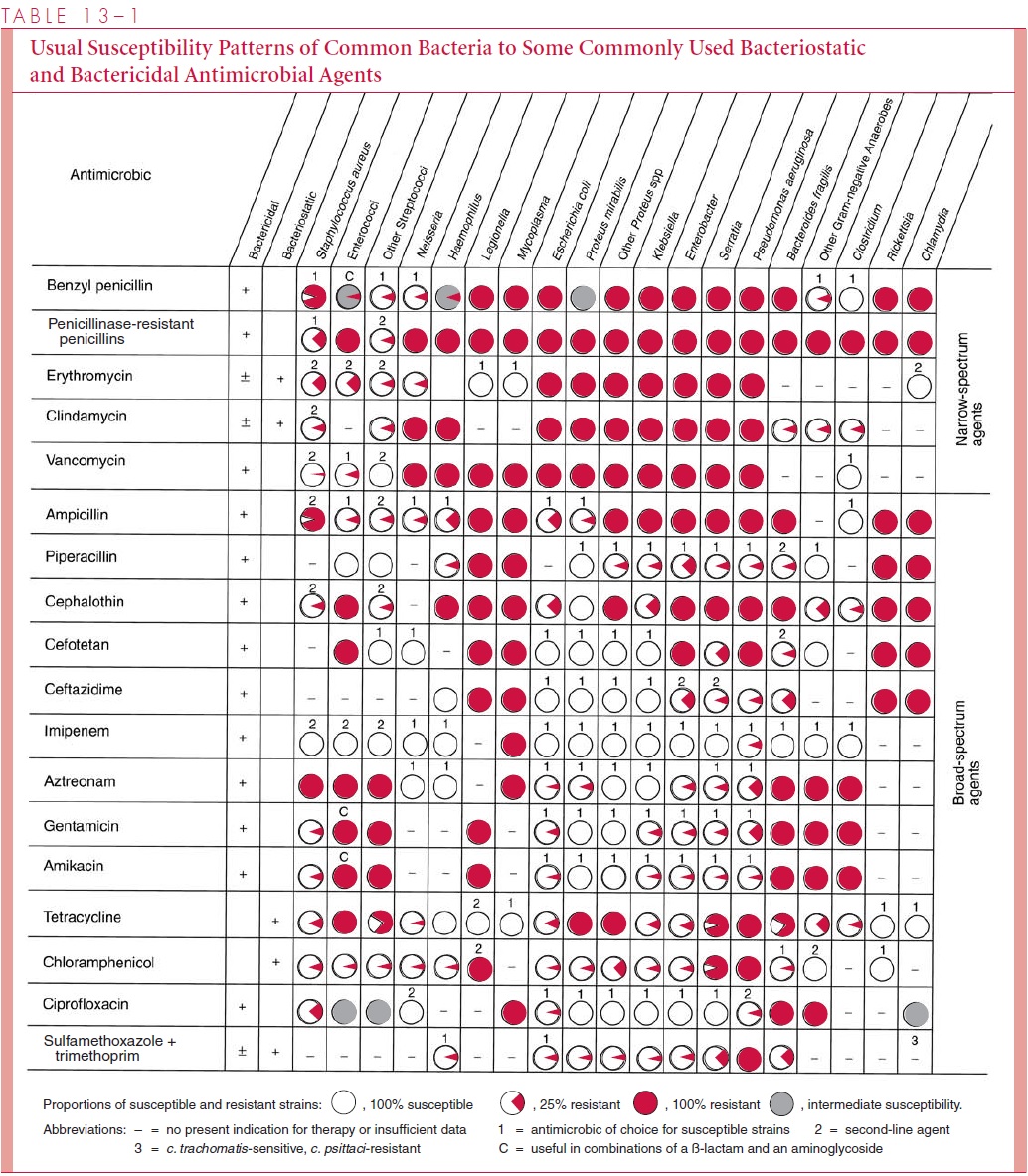 Some antibacterial antimicrobics are known as narrow-spectrum agents; for example, benzyl penicillin is highly active against many Gram-positive and Gram-negative cocci but has little activity against enteric Gram-negative bacilli. Chloramphenicol, tetracycline, and the cephalosporins, on the other hand, are broad-spectrum agents that in-hibit a wide range of Gram-positive and Gram-negative bacteria, including some obligate intracellular organisms. When resistance develops in an initially sensitive genus or species, that species is still considered within the spectrum even when the resistant subpopulation is significant. For example, the spectrum of benzyl penicillin is considered to include Staphy-lococcus aureus, although more than 80% of strains now are penicillin resistant.