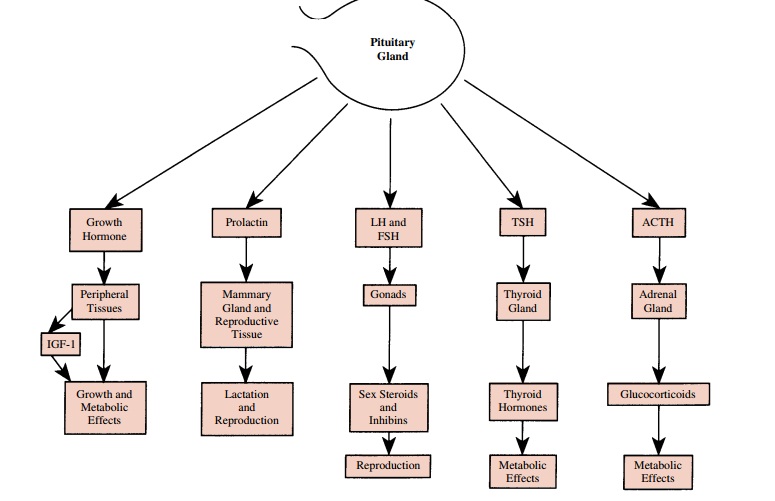 Six major hormones are secreted by the adenohypoph-ysis, or anterior pituitary gland .

Six major hormones are secreted by the adenohypoph-ysis, or anterior pituitary gland (Fig. 59.1). Cells in the anterior pituitary gland also secrete small amounts of a variety of other proteins, including renin, angiotensino-gen, sulfated proteins, fibroblast growth factor, and other mitogenic factors. The physiological significance of these other secretory products is not known, but they may participate in autocrine regulation of the gland. 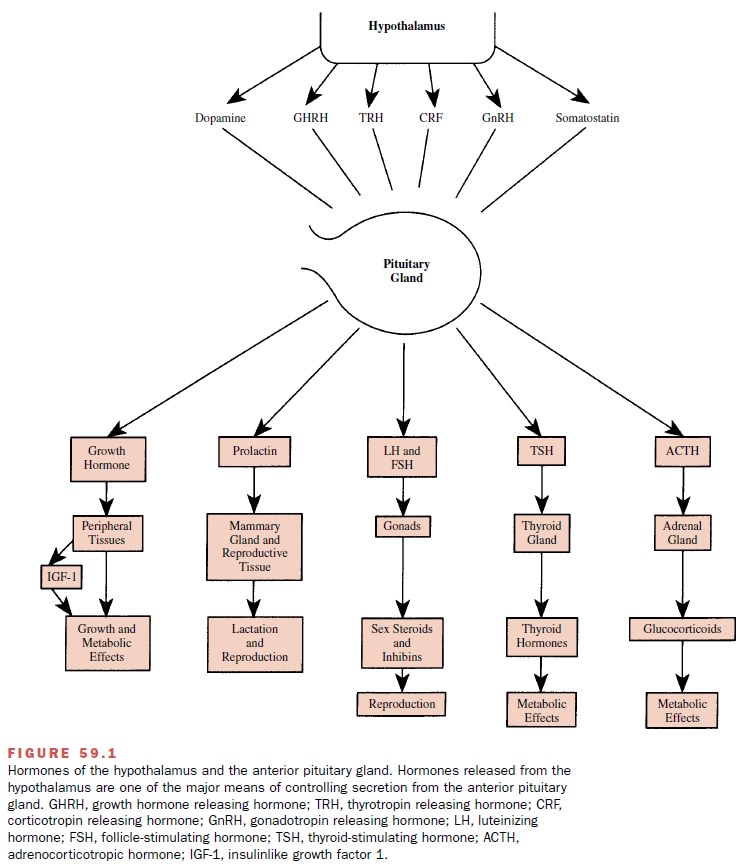 The secretion of anterior pituitary hormones is con-trolled in part by hypothalamic regulatory factors that are stored in the hypothalamus and are released into the adenohypophyseal portal vasculature. Hypothalamic regulatory factors so far identified are peptides with the exception of dopamine. Secretion of anterior pituitary hormones is also controlled by factors produced more distally that circulate in the blood. Predominant control of hormone production may be relatively simple, as with thyroid-stimulating hormone (TSH), the production of which is primarily stimulated by thyrotropin-releasing hormone (TRH) and inhibited by thyroid hormones, or it may be complex, as with prolactin, the production of which is affected by many neurotransmitters and hor-mones.

All anterior pituitary hormones are released into the bloodstream in a pulsatile manner; the secretion of many also varies with time of day or physiological con-ditions, such as exercise or sleep. At least part of the pul-satility of anterior hormone secretion is caused by pul-satile secretion of hypothalamic regulatory hormones. Understanding the rhythms that control hormone secre-tion has led to better uses of hormones in therapy.

Growth hormone, or somatotropin, is a protein that stimulates linear body growth in children and regulates cellular metabolism in both adults and children. Growth hormone stimulates lipolysis, enhances production of free fatty acids, elevates blood glucose, and promotes positive nitrogen balance. Many of its anabolic actions are mediated by enhanced production of an insulinlike growth factor (IGF-1), a protein produced in many tis-sues in response to growth hormone.

The episodic release of growth hormone is the most pronounced among the pituitary hormones. Serum lev-els between bursts of release are usually low (< 5 ng/mL) and increase more than 10-fold when release is elevated. The marked variation in serum levels is in part the result of strong controls in opposite directions by the hypothalamic hormones, growth hormone–releasing hormone (GHRH), and somatostatin. Circulating fac-tors, such as IGF-1 and ghrelin, a peptide produced in large amounts in neuroendocrine cells of the stomach, also affect growth hormone secretion. Growth hormone is released during sleep, with maximum release occur-ring an hour after the onset of sleep. Growth hormone is also released after exercise, by hypoglycemia, and in response to arginine and levodopa.

Growth hormone deficiency in children results in short stature and in adults increases fat mass and reduces mus-cle mass, energy, and bone density. Measurements of serum growth hormone levels are used for diagnosis of deficiency, but random measurements are not useful, be-cause normal episodic release results in large variations in growth hormone levels. Growth hormone deficiency is most convincingly demonstrated by lack of response to provocative stimuli, such as administration of insulin, levodopa, or arginine. Recently a combination of GHRH and ghrelin have been used and have given large responses in normal subjects. Deficiencies are corrected by giving human growth hormone. Growth hormone is also sometimes given to individuals who are not growth hormone–deficient; it is used to increase the height of girls with Turner’s syndrome and in certain conditions to counteract the wasting that may occur in AIDS.

In the past human growth hormone was prepared from human pituitary glands, but this source was dis-continued after people who had received treatment contracted Creutzfeldt-Jakob disease. Now two forms of recombinant human growth hormone are available: somatropin (Humatrope and others), which has the same amino acid sequence as pituitary-derived growth hormone, and somatrem (Protropin), which has an N-terminal methionine that the pituitary form does not. Subcutaneous injections each evening, which mimic the natural surge that occurs at the start of sleep, are the usual regimen. Stimulation of growth in children is most effective when treatment begins early.

The primary treatment of acromegaly is surgery. Pharmacotherapy is used when surgical treatment is not successful. Two dopamine agonists , bromocriptine and cabergoline, are sometimes effec-tive; they are taken orally. Although dopamine stimu-lates growth hormone release in normal individuals, it inhibits growth hormone release in up to 50% of acromegalics. The somatostatin analogue octreotide is usually more effective, and now that a long-acting form is available that requires only monthly injections, it is the preferred treatment. Another possible growth hor-mone antagonist, pegvisomant, is being investigated.

Human prolactin is similar in structure to human growth hormone, and both are good lactogens. In women, pro-lactin acts with other hormones on the mammary gland during pregnancy to develop lactation and after birth to maintain it. Hyperprolactinemia causes impotence in men and amenorrhea and infertility in women. Chronically el-evated levels of circulating prolactin are associated with suppression of 17- -estradiol and testosterone produc-tion in the ovaries and testes.

Prolactin serum levels increase during pregnancy and breast-feeding, at least immediately after the birth. In both men and women, prolactin increases after sleep starts, continues to increase during the night, and in-creases markedly during stress. Prolactin release is episodic during the day. More than 20 hormones and neu-rotransmitters affect prolactin production, but the domi-nant physiological control is primarily negative, mediated by dopamine from the hypothalamus. Dopaminergic ago-nists inhibit prolactin release and antagonists, such as the antipsychotic drugs, increase release.

There is no known therapeutic use for prolactin, but serum levels are measured to diagnose hyperprolactine-mia. The normal range of serum prolactin is 1 to 20 ng/mL. Elevated prolactin levels ( 100 ng/mL) in the ab-sence of stimulatory factors, such as antipsychotic drugs, are an indication of pituitary adenoma. Approximately one-third of women who need treatment for infertility have high serum prolactin levels. Galactorrhea, or inap-propriate lactation, is sometimes associated with high prolactin levels. Hyperprolactinemia has been tradition-ally treated by the dopaminergic agonist bromocriptine (Parodel). The doses, usually 5 mg/day, are lower than those used to treat Parkinson’s disease, and therefore, the side effects, nausea and postural hypotension, are less likely to cause problems. More recently, however, the more potent, long-lasting dopaminergic agonist cabergo-line (Dostinex) has been found to be at least as effective and has a lower incidence of side effects.

TSH, or thyrotropin, is a glycosylated protein of two subunits, and . TSH stimulates the thyroid gland to produce thyroid hormones. Deficiencies are treated by giving thyroxine itself rather than TSH, but TSH is available for diagnostic purposes to differentiate be-tween pituitary and thyroid gland failure as causes of hypothyroidism .

Follicle-stimulating hormone (FSH), luteinizing hor-mone (LH), and human chorionic gonadotropin (hCG) are glycoproteins that are similar in structure to TSH. Glycosylation is not identical among the different hor-mones, and the type of glycosylation influences the half-life of the hormones. A sulfated N-acetylgalactosamine attached to LH but not FSH causes LH to be more rap-idly metabolized; the half-life of LH is 30 minutes and that of FSH is 8 hours.

LH and FSH are pituitary hormones secreted in pul-satile fashion approximately every 2 hours. In women before menopause, this pattern is superimposed on much larger changes that occur during the normal men-strual cycle. FSH is released in substantial amounts dur-ing the follicular phase of the menstrual cycle and is re-quired for proper development of ovarian follicles and for estrogen synthesis from granulosa cells of the ovary. Most LH secretion occurs in an abrupt burst just before ovulation. LH is required for progesterone synthesis in luteal cells and androgen synthesis in thecal cells of the ovary. FSH stimulates spermatogenesis and synthesis of androgen-binding protein in Sertoli cells of the testes. LH stimulates testosterone production from Leydig cells. Production of LH and FSH is controlled by gonadotropin-releasing hormone (GnRH) from the hy-pothalamus and by feedback control from target organs through steroids and multiple forms of a protein, in-hibin.

Injections of these hormones are used to treat infertility in women and men. Traditional sources of gonadotropins are from human urine. Human menopausal gonadotropins (menotropins, Humegon, Pergonal) are isolated from urine of postmenopausal women and contain both FSH and LH. Purified prepa-rations of FSH from the same source are also available (urofollitropin, Fertinex, Fertinorm HP). During early pregnancy, trophoblasts of the placenta produce hCG in large amounts. LH and hCG bind to the same go-nadal receptors, but hCG is more stable and can be iso-lated from urine of pregnant women, so hGH prepara-tions (Pregnyl, Profasi) are used to mimic the burst of LH secretion before ovulation. Recombinant prepara-tions of FSH are also available (follitropin, Gonal F, Follistim).

Gonadotropins are used to treat infertility in women with potentially functional ovaries who have not responded to other treatments. The therapy is de-signed to simulate the normal menstrual cycle as far as is practical. A common protocol is daily injections of menotropins for 9 to 12 days, until estradiol levels are equal to that in a normal woman, followed by a single dose of hCG to induce ovulation. Two problems with this treatment are risks of ovarian hyperstimulation and of multiple births. Ovarian hyperstimulation is characterized by sudden ovarian enlargement associ-ated with an increase in vascular permeability and rapid accumulation of fluid in peritoneal, pleural, and pericardial cavities. To prevent such occurrences, ovar-ian development is monitored during treatment by ul-trasound techniques and by measurements of serum levels of estradiol.

Purified FSH is used to prepare follicles for in vitro fertilization because LH activity in menotropins may cause premature ovulation. Purified FSH is also used to treat infertility in women with polycystic ovarian dis-ease; in this disease LH and androgen production may already be elevated.

Adrenocorticotropic hormone (ACTH), or corti-cotropin, a peptide of 39 amino acids, is first synthe-sized as a larger precursor from which ACTH is de-rived by proteolytic cleavage. ACTH stimulates production of glucocorticoids from the adrenal cortex . Release of ACTH depends on diurnal rhythms with serum levels highest in the early morning. Secretion of this peptide also increases under stress. It is easier and less expensive to treat patients having adrenocortical insufficiency with glucocorticoid re-placement therapy than it is to use ACTH. Therefore, use of ACTH (Acthar) is restricted to diagnosis; a shorter 24–amino acid analogue (Cosyntropin) is also used. Intravenous administration of ACTH should re-sult in peak plasma levels of glucocorticoids within 30 to 60 minutes if the adrenal gland is functional. Prolonged administration of ACTH in a repository form, however, may be necessary to stimulate steroid production, because ACTH has long-term trophic ef-fects on adrenal cells in addition to the rapid stimula-tion of steroid production. If the cause of steroid defi-ciency is at the level of the pituitary gland, ACTH should eventually stimulate steroid production.