Seizures represent abnormal synchronized electrical activity in the brain. They may be a manifestation of an underlying central nervous system disease, a systemic disorder, or idiopathic. Potential underly-ing mechanisms are thought to include (1) loss of inhibitory activity, (2) enhanced release of excitatory amino acids, and (3) enhanced neuronal firing due to abnormal voltage-mediated Ca 2+ currents. Up to 2% of the population may experience a seizure in their lifetime. Epilepsy is a disorder characterized by recurrent paroxysmal seizure activity. Healthy indi-viduals who experience an isolated nonrecurrent seizure are not considered to have epilepsy.Seizure activity may be localized to a specific area in the brain or may be generalized. Moreover, initially localized (focal) seizures can subsequently spread, becoming generalized. A simple classifi-cation scheme is presented in Table28–2. Partial 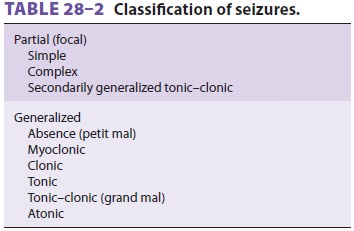 seizures (also called focal) are clinically manifested by motor, sensory, autonomic, or psychiatric symp-toms, depending on the cortical area affected. Focal seizures associated with impairment in conscious-ness are termed “complex partial” (psychomotor or temporal lobe) seizures. Generalized seizures char-acteristically produce bilaterally symmetric electri-cal activity without local onset. They result with or without abnormal motor activity, loss of con-sciousness, or both. Generalized activity resulting in isolated, transient lapses in consciousness are called absence (petit mal) seizures. Other general-ized seizures are usually classified according to the type of motor activity. Tonic–clonic (grand mal) seizures are most common and are characterized by a loss of consciousness followed by clonic and then tonic motor activity.

Anesthetic evaluation should focus primarily on the underlying disorder and secondarily on the seizures. One should determine the cause and type of seizure activity and the drugs with which the patient is being treated. Seizures in adults are most commonly due to structural brain lesions (head trauma, tumor, degeneration, or stroke) or metabolic abnormalities (uremia, hepatic fail-ure, hypoglycemia, hypocalcemia, drug toxicity, or drug/alcohol withdrawal). Idiopathic seizures occur most often in children, but may persist into adulthood. Characterization of the type of seizure is important in detecting such activity 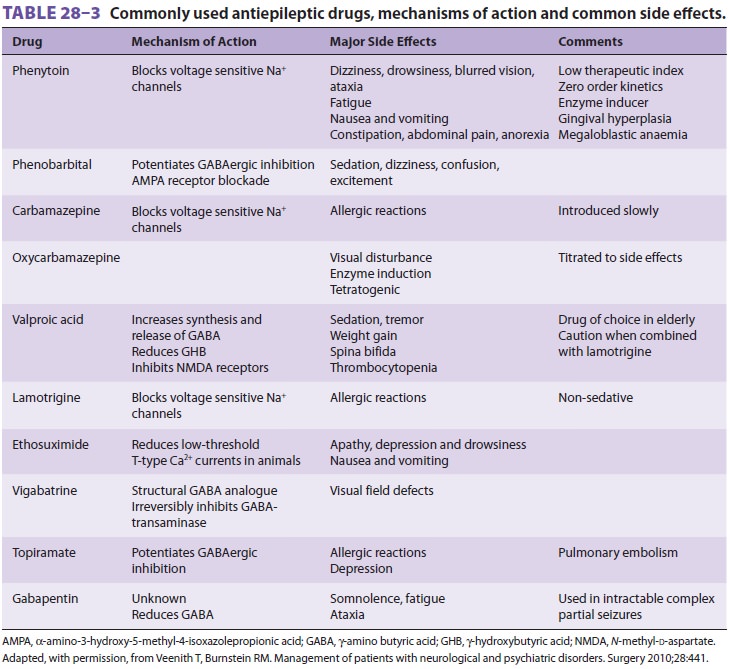 perioperatively. Seizures—particularly grand mal seizures—are serious complicating factors in sur-gical patients and should be treated promptly to prevent musculoskeletal injury, hypoventilation, hypoxemia, and aspiration of gastrointestinal con-tent. Even partial seizures can progress to grand mal seizures. If a seizure occurs, maintaining an open airway and adequate oxygenation are the first priorities. Intravenous propofol (50–100 mg), phenytoin (500–1000 mg slowly), or a benzodiaz-epine such as diazepam (5–10 mg) or midazolam (1–5 mg) can be used to terminate the seizure. Most patients with seizure disorders receive antiepileptic drugs preoperatively ( Table28–3). Antiseizure medications should be continued throughout the perioperative period to maintain therapeutic levels.

In selecting anesthetic agents, drugs with epilepto-genic potential should be avoided, most notably the general anesthetic enflurane (now of only historicinterest). Theoretically, ketamine and methohexi-tal (in small doses) can precipitate seizure activity. Hypothetically, large doses of atracurium, cisatracu-rium, or meperidine may be relatively contraindi-cated because of the reported epileptogenic potential of their respective metabolites, laudanosine, and normeperidine. Hepatic microsomal enzyme induc-tion should be expected from chronic antiseizure therapy. Enzyme induction may increase the dose requirement and frequency of intravenous anesthet-ics and nondepolarizing neuromuscular blockers (NMBs) and may increase the risk for hepatotoxicity from halothane.