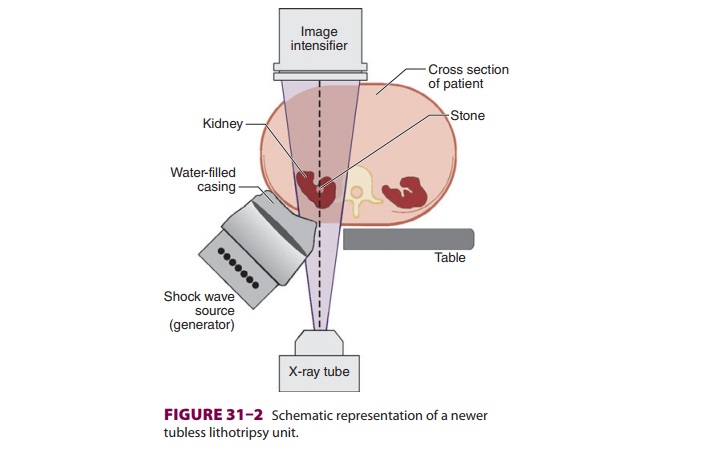 The treatment of kidney stones has evolved from primarily open surgical procedures to less invasive or entirely noninvasive techniques.

The treatment of kidney stones has evolved from primarily open surgical procedures to less invasive or entirely noninvasive techniques. Cystoscopic procedures, including flexible ureteroscopy with stone extraction, stent placement, and intracorpo-real lithotripsy (laser or electrohydraulic), along with medical expulsive therapy (MET), have become first-line therapy. Extracorporeal shock wave litho-tripsy (ESWL) is also utilized, primarily for 4-mm to 2-cm intrarenal stones, and percutaneous and lapa-roscopic nephrolithotomy for larger or impacted stones. MET has become the treatment of choice among many clinicians for acute episodes of uroli-thiasis: for stones up to 10 mm in diameter, admin-istration of the α blockers tamsulosin (Flomax), doxazosin (Cardura), or terazosin (Hytrin) or the calcium channel blocker nifedipine (Procardia, Adalat) lessens the pain of acute urolithiasis and increases the rate of stone expulsion over a period of several days to several weeks.

During ESWL, repetitive high-energy shocks (sound waves) are generated and focused on the stone, causing it to fragment as tensile and shear forces develop inside the stone and cavitation occurs on its surface. Water or a conducting gel couples the generator to the patient. Because tissue has the same acoustic density as water, the waves travel through the body without damaging tissue. However, the change in acoustic impedance at the tissue–stone interface creates shear and tear forces on the stone. Subsequently, the stone is fragmented enough to allow its passage in small pieces down the urinary tract. Ureteral stents are often placed cystoscopi-cally prior to the procedure. Tissue destruction can occur if the acoustic energy is inadvertently focused at air–tissue interfaces such as in the lung and intes-tine. The inability to position the patient so that lung and intestine are away from the sound wave focus is a contraindication to the procedure. Other con-traindications include urinary obstruction below the stone, untreated infection, a bleeding diathe-sis, and pregnancy. The presence of a nearby aor-tic aneurysm or an orthopedic prosthetic device is considered a relative contraindication. Ecchymosis, bruising, or blistering of the skin over the treatment site is not uncommon. Rarely, a large perinephric hematoma can develop and may be responsible for a postoperative decrease in hematocrit.Electrohydraulic, electromagnetic, or piezo-electric shock wave generators may be used for 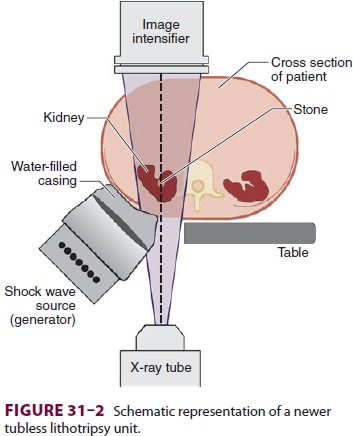 ESWL. With older electrohydraulic units, the patient is placed in a hydraulic chair and immersed in a heated water bath, which conducts the shock waves to the patient. Modern lithotriptors gener-ate shock waves either electromagnetically or from piezoelectric crystals. The generator is enclosed in a water-filled casing and comes in contact with the patient via a conducting gel on a plastic mem-brane (Figure 31–2). Newer units allow both fluo-roscopic and ultrasound localization. In the case of electromagnetic machines, the vibration of a metallic plate in front of an electromagnet pro-duces the shock waves. With piezoelectric models, the waves are the result of changes in the external dimensions of ceramic crystals when electric cur-rent is applied.

Patients with a history of cardiac arrhythmias and those with a pacemaker or internal cardiac defibrillator (ICD) may be at risk for developing arrhythmias induced by shock waves during ESWL. Synchronization of the shock waves with the electro-cardiogram (ECG) R wave decreases the incidence of arrhythmias during ESWL. The shock waves are usually timed to be 20 ms after the R wave to correspond with the ventricular refractory period. Studiessuggest that asynchronous delivery of shocks may be safe in patients without heart disease. Shock waves can damage the internal components of pacemaker and ICD devices. The manufacturer should be con-tacted as to the best method for managing the device (eg, reprogramming or applying a magnet).

Anesthetic considerations for ureteroscopy, stone manipulation, and laser lithotripsy are similar to those for cystoscopic procedures. ESWL requires special considerations, particularly when older lith-otriptors requiring the patient to be immersed in water are used.

A. Effects of Immersion During ESWL

Immersion into a heated water bath (36–37°C) ini-tially results in vasodilation that can transiently lead to hypotension. Arterial blood pressure, however, subsequently rises as venous blood is redistributed centrally due to the hydrostatic pressure of water on the legs and abdomen. Systemic vascular resistance (SVR) rises and cardiac output often decreases. The sudden increase in intravascular volume and SVR can precipitate congestive heart failure in patients with marginal cardiac reserve. Moreover, the increase in intrathoracic blood volume reduces functional residual capacity 30–60% and may pre-dispose some patients to hypoxemia.

B. Choice of Anesthesia

Pain during lithotripsy is from dissipation of a small amount of energy as shock waves enter the body through the skin. The pain is therefore localized to the skin and is proportionate to the shock wave intensity. Older water bath lithotripsy units require 1000–2400 relatively high-intensity shock waves, which most patients cannot tolerate without either regional or general anesthesia. In contrast, newer lithotripsy units that are coupled directly to the skin utilize 2000–3000 lower-intensity shock waves that usually require only light sedation.

Continuous epidural anesthesia is commonly employed when ESWL utilizes older water bath lithotriptors. Regional anesthesia with sedation greatly facilitates positioning and monitoring in this situation, and supplemental oxygen by face mask or nasal cannula is also useful in avoiding hypoxemia. A T6 sensory level ensures adequate anesthesia, as renal innervation is derived from T10 to L2. Supplementation of the block with epidural fentanyl (50–100 mcg) is often useful. When using the loss of resistance technique for placement of the epidural catheter, saline should be used instead of air during epidural catheter insertion; as air in the epidural space can dissipate shock waves and may promote injury to neural tissue. Foam tape should not be used to secure the epidural catheter as this type of tape has been shown to dissipate the energy of the shock waves when it is in their path. Spinal anesthesia can also be used satisfactorily but offers less control over the sensory level and an uncertain duration of surgery; for this reason, epidural anes-thesia is usually preferred.

A major disadvantage of regional anesthesia or sedation is the inability to control diaphragmatic movement. Excessive diaphragmatic excursion during spontaneous ventilation can move the stone in and out of the wave focus and may prolong the procedure. This problem can be partially solved by asking the patient to breathe in a more rapid but shallow respiratory pattern. Bradycardia due to high sympathetic blockade also prolongs the pro-cedure when shock waves are coupled to the ECG, and small doses of glycopyrrolate are often admin-istered in this situation to accelerate the ESWL procedure.

General endotracheal anesthesia allows control of diaphragmatic excursion during lithotripsy using older water bath lithotriptors. The procedure is complicated by the inherent risks associated with placing a supine anesthetized patient in a chair, ele-vating and then lowering the chair into a water bath to shoulder depth, and then reversing the sequence at the end. A light general anesthetic technique in conjunction with a muscle relaxant is preferable. The muscle relaxant ensures patient immobility and con-trol of diaphragmatic movement.

Standard anesthesia monitoring must be used for conscious or deep sedation, or for general anesthesia.

Even with R-wave synchronized shocks, supraven-tricular arrhythmias can occur. With immersionlithotripsy, ECG pads should be attached securely with waterproof dressing. Changes in functional residual capacity with immersion mandate monitor-ing of oxygen saturation, particularly in patients at risk for developing hypoxemia. The temperature of the bath and the patient should be monitored to pre-vent hypothermia or hyperthermia.