Obesity is associated with many concomitant dis-ease states, such as hypertension, diabetes, hyper-lidipemia, and obstructive sleep apnea (OSA).

Obesity is associated with many concomitant dis-ease states, such as hypertension, diabetes, hyper-lidipemia, and obstructive sleep apnea (OSA). The physiologic derangements that accompany these conditions include changes in oxygen demand, car-bon dioxide production, alveolar ventilation, and cardiac output. Patients with obesity and OSA are at increased risk of postoperative respiratory compli-cations, such as prolonged airway obstruction and apnea. Scores for predicting the probability of these complications can aid in the preoperative assessment and referral to a hospital setting (Tables 44–1 and 44–2). Although a sleep study is the standard way to 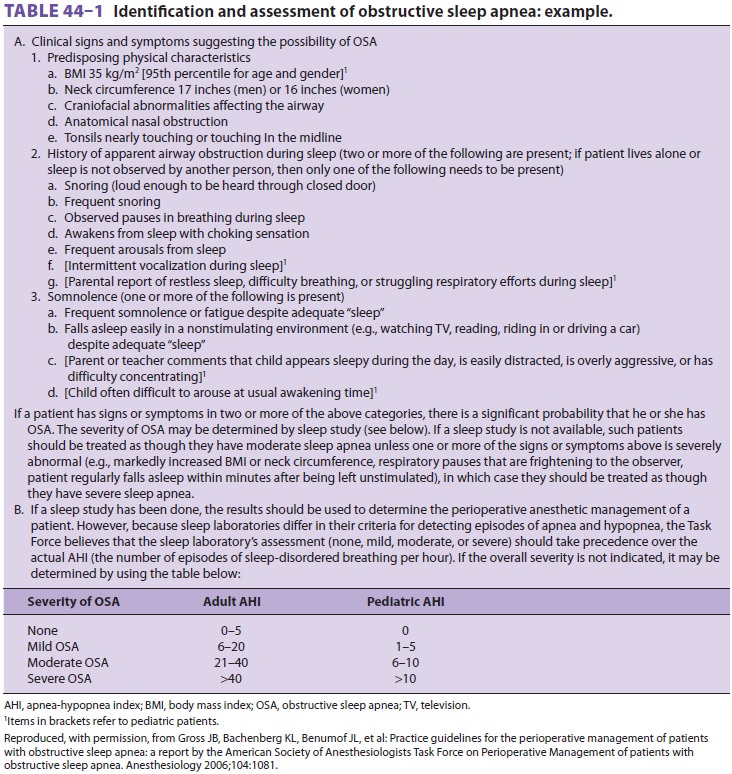 diagnose sleep apnea, many patients with OSA have never been identified as having OSA. Consequently, an anesthesiologist may be the first physician to detect the presence or risk of sleep apnea. The ASA has provided suggestions on the types of procedures and anesthetics that can safely be used in ambula-tory patients with OSA (Table 44–3). In addition to the usual discharge criteria, the ASA also recom-mends the following in patients with OSA:

·        No hypoxemic episodes or periods of airway obstruction when left alone

According to the ASA Task Force on Obesity and OSA, these OSA patients can be managed safely as outpatients; however, they have an increased risk of postoperative complications requiring increased monitoring, availability of radiologic/laboratory ser-vices, and availability of continuous positive airway pressure and mechanical ventilation, thus making an office-based setting potentially inadequate for man-aging complications that may arise. Nonetheless, under certain conditions, anesthesia and surgery 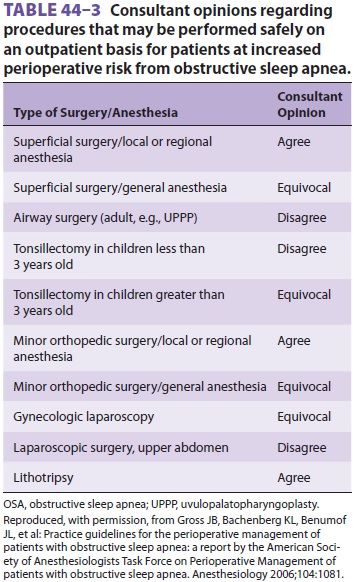 can be performed in an ambulatory surgery center or hospital outpatient facility.

Increasingly, patients present to ambulatory sur-gery with a variety of cardiac conditions treated both pharmacologically and mechanically (eg, car-diac resynchronization therapy, implantable cardio-verter-defibrillators [ICDs], stents). It is therefore likely that anesthesia staff working in ambulatory settings will encounter increasing numbers of such patients, who, despite a cardiac history, have stable cardiac conditions. Patients previously treated with stents are likely to be on antiplatelet regimens. As always, these agents should not be discontin-ued unless a discussion has occurred between the patient, cardiologist, and surgeon regarding both the necessity of surgery and the discontinuation of antiplatelet therapy. Likewise, β-blockers should be continued perioperatively. Angiotensin-converting enzyme inhibitors and angiotensin receptor block-ers may contribute to transient hypotension with anesthesia induction, but their continuation or dis-continuation perioperatively seems to have minimal effects, as patients so treated likely will need to have intraoperative hypotension corrected in either case. The ASA guidelines recommend that patients pre-senting with a pacemaker or ICD should not leave a monitored setting until the device is interrogated, if electrocautery was employed; however, this ASA recommendation is controversial, as some argue that if bipolar cautery is used at a distance of greater than 15 cm from the device, immediate interrogation of the device is not necessary prior to discharge from a monitored setting. Likewise, if an ICD is present, and there is anticipated electromagnetic interference the device’s antitachycardia features should be inhib-ited perioperatively (see Figures 44–1 and 44–2). 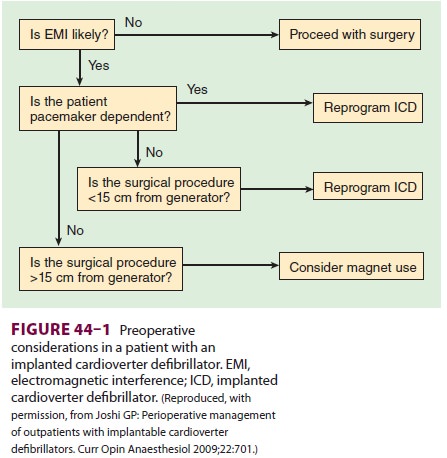 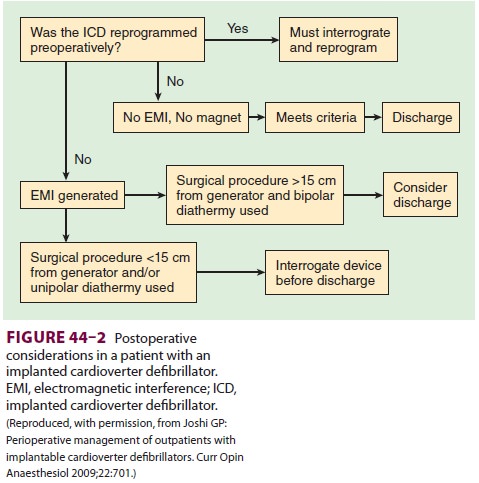 In a consensus statement on perioperative glucose control, the Society for Ambulatory Anesthesia found insufficient evidence to make strong recom-mendations about glucose management in ambu-latory patients, and thus management suggestions parallel those of the inpatient population; however, the panel recommends a target intraoperative blood glucose concentration of <180 mg/dL.

Patients with a history of malignant hyperthermia can be safely given nontriggering anesthetics and discharged as ambulatory patients. Prophylactic dantrolene should not be administered.