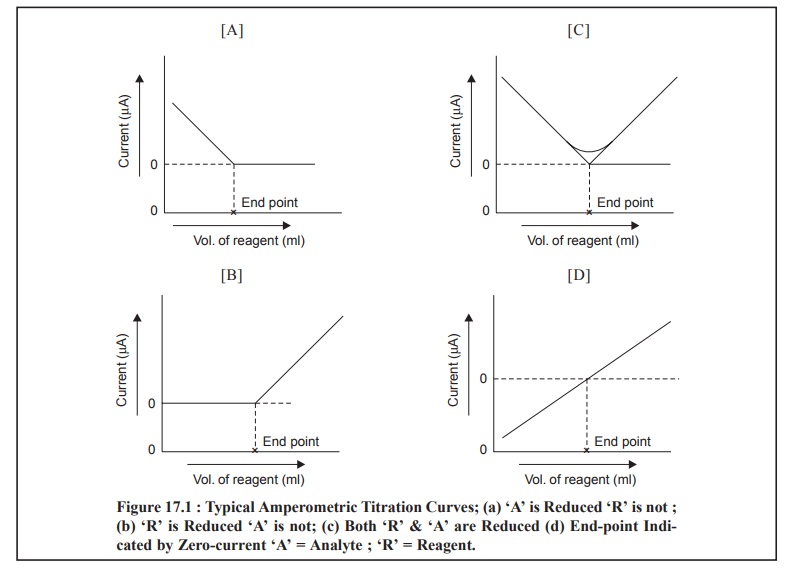 Assuming that the migration current (Im) is virtually eliminated by the addition of a reasonably enough supporting electrolyte then the only cardinal factor which would affect the limiting current would be the rate of diffusion of the electro-active substance from the main body of the solution to the surface of the electrode.

It follows from above that the diffusion current is directly proportional to the concentration of the electro-active substance present in the solution. Now, if a situation is created whereby a portion of the electro-active substance is eliminated by interaction with a specific reagent, the diffusion current shall decrease significantly. It represents the fundamental underlying principle of amperometric method or amperometry. Hence, at an appropriate applied voltage the apparent diffusion current is measured as a function of the volume of the titrating solution added. Now, if a graph is plotted between the ‘current’ against the ‘volume of reagent added’, the end-point will be represented by the point of intersection of two lines indicating the change of current both before and after the equivalence is achieved.

The most commonly obtained various kinds of curves encountered in amperometric methods are illustrated in Fig. 17.1 (a) through (d) ; and each of them shall be discussed briefly as follows :

Fig. 17.1 (a) : It represents a titration wherein the analyte reacts at the electrode whereas the reagent does not. In other words, only the substance under titration gives rise to a diffusion current ; whereby the electro-active substance is removed from the solution by means of precipitation with an inactive substance.

Example : The titration of Pb2+ with SO4 2– or C2O42– ions. An appreciably high potential is usually applied to yield a diffusion current for lead. From Fig. : 1(A), one may evidently observe a linear decrease in current because Pb2+ ions are removed from the solution by precipitation. The small curvature just prior to the end-point (or equivalence point) shows the incompleteness of the analytical reaction in this particular region. However, the end-point may be achieved by extrapolation of the linear portions, as shown in the said figure. 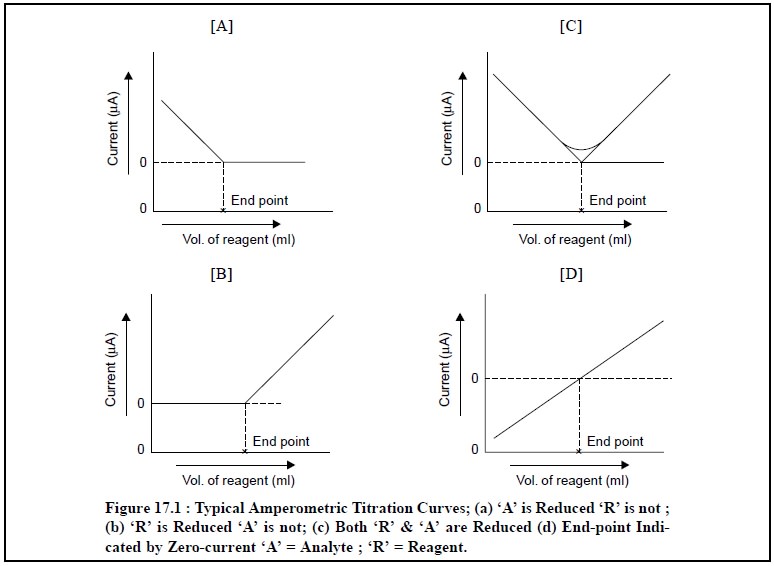 Figure 17.1 (b) : It designates typical of an amperometric titration curve wherein the reagent exclu-sively reacts at the microelectrode surface and the analyte does not. In other words, the reagent gives rise to a diffusion current, whereas the solute does not ; it means an electro-active precipitating reagent is being added to an inactive substance.

Examples : (a) Titration of Mg2+ with 8-hydroxyquinoline. In this particular instance, a diffusion current for 8-hydroxyquinoline is normally achieved at – 1.6 V Vs Standard Calomel Electrode (SCE), whereas Mg2+ ion is more or less inert at this potential.

Figure 17.1 (c) : It represents an amperometric method wherein the solute as well as the titrating reagent afford diffusion currents ; and give rise to a sharp V-shaped curve. The end-point may be obtained by extrapolation of the lower-end of the V-shaped portion of the curve as depicted in the above Figure.

Examples : (a) Titration of Ph2+ ion with Cr2O72– ion. The Figure : 17.1 (c) corresponds to the amperometric titrations of Pb2+ and Cr2O72– ion at an applied potential more than – 1.0 V ; when both these ions afford diffusion currents at this very potential and the end-point is duly signalled corresponding to a minimum in the curve.

Figure 17.1 (d) : In this particular instance the current undergoes a change from cathodic to anodic or vice-versa. Thus, the final end-point of the potentiometric titration is indicated by a zero-current as depicted in Figure 17.1 (d). Since the resulting diffusion coefficient of the reagent is found to be slightly different from the corresponding substance under titration, therefore, the slope of the line just before the end-point actually differs very slightly from that after the end-point. However, in actual practice it is rather convenient to add the reagent unless and until the current attains a zero value.

(b) Titration of Ti3+ ion in an acidified tartaric acid,

In addition to the above four types of amperometric methods cited, there also exist a plethora of titrations involving neutralization and complex ion formation that have been accomplished successfully, for instance :

(i) Amperometric method for the study of precipitation reactions, e.g., salicylaldoxime (or salicylaldehyde oxime), dimethylglyoxime, have been used for such type of studies.

(ii) Halides, such as : I–, Br– and Cl– have been titrated at a less negative potential by virtue of the fact that in these titrations the main indicator reaction is the deposition of silver from aquo-silver ions.

(iii) Micromolecular solutions of Cd2+ ions against ethylene diaminetetra-acetic acid (EDTA) have been carried out amperometrically.

2. CORRECTIONS FOR THE VOLUME CHANGE

The corrections for the volume change may be affected by adopting either of the two methods de-scribed below namely :

Method I : In order to obtain plots between current (μ A) and volume of reagent (ml) specifically with linear regions both before and after the end-point (or equivalence point), it is absolutely necessary to apply the corrections for the volume change which results from the added titrant. This correction is applied by multiplying the measured corresponding diffusion current (Id) by the following factor :

where, V = Initial volume of the solution, and

Method II : The above correction caused due to the volume change may be eliminated to a great extent by making use of the reagent at a concentration of 10 to 20 times higher than that of the corresponding solute, and subsequently adding the same from a semimicro-burette very carefully. The use of concentrated reagents have the following advantages, namely :

(a) Relatively very small amount of dissolved O2 is incorporated into the system, which eliminates completely the prolonged bubbling of inert gas (e.g., N2) through the medium after each addition of the reagent, and

(b) Elimination of ‘migration current’ by simple addition of enough supporting electrolyte. If need be, an appropriate maximum suppressor can also be incorporated judiciously.

A few cardinal advantages of amperometric titrations are described below, namely :

·              The amperometric titration may normally be performed very quickly, because the equivalence point (or end-point) is determined graphically. A series of measurements at constant applied volt-age just prior and latter to the end-point are more than enough.

·              The titrations can be carried out both satisfactorily and effectively in such situations where the solubility relations offer erroneous and unsatisfactory results given by visual indicator and potentiometric methods. For instance :

(a) A reaction product which is hydrolysed significantly e.g., acid base titrations, and

(b) A reaction product that is appreciably insoluble e.g., precipitation reaction.

It is quite evident that the readings in the vicinity of end-point offer practically no specific value and importance in amperometric titrations. Because the readings are mostly taken in particular zones where there exists either an excess of reagent or of titrant, and which specific points the hydrolysis or solubility is entirely suppressed by the effect of Mass Action. The point of intersection of these lines ultimately gives rise to the desired end-point.

·              A good number of amperometric titrations may be performed on considerably dilute solutions (say, 10–4 M) at which neither potentiometric nor visual indicator methods ever can give precise and accurate results, and

·              In order to eliminate the migration current (Im) completely either the ‘foreign salts’ already present cause little interference or invariably added so as to serve as the ‘supporting electrolyte’.