The amperometric titrations can be accomplished by any one of the three methods, namely :

(i) Amperometric titrations with the dropping mercury electrode,

(ii) Amperometric titrations with a rotating platinum microelectrode, and

These three techniques will be discussed in the sections that follow.

Figure 17.2 (a) and (b) illustrates the schematic diagram of amperometric titrations with the dropping mercury electrode having a titration-cell and an electric circuit respectively.

The titration-cell Figure 17.2 (a) essentially comprises of a pyrex 100-ml, four-necked, flat-bottomed flask. A semimicro burette (B) (graduated in 0.01 ml), a 2-way gas-inlet tube (A) to enable N2 to pass either through the solution or simply over its surface, a dropping mercury electrode (C) and an agar-potassium salt-bridge* are duly fitted into the four necks with the help of air-tight rubber stoppers.

The electrical circuit, Figure 17.2 (b), consists of two 1.5 V dry cells that provides a voltage applied to the above titration cell. It is duly controlled and monitored by the potential divider (R) and is conveniently measured with the help of a digital voltmeter (V). Finally, the current flowing through the circuit may be read out on the micro-ammeter (M) installed.

The following steps may be carried out in a sequential manner for an amperometric titration, namely :

·              A known volume of the solution under investigation is introduced in the titration cell,

·              The apparatus is assembled and electrical connections are duly completed with dropping mercury electrode (C) as cathode and saturated calomel half-cell as anode,

·              Applied voltage is adjusted to the desired value, and the initial diffusion current (Id) is noted carefully,

·              A known volume of the reagent is introduced from the semimicro burette (B), while N2 is again bubbled through the solution for about 2 minutes to ensure thorough mixing as well as complete elimination of traces of O2 from the added liquid,

·              The flow of N2 gas through the solution is stopped, but is continued to be passed over the surface of the solution gently so as to maintain an O2 free inert atmosphere in the reaction vessel,

·              The current (µA) and microburette readings are recorded simultaneously, and

·              Finally, the said procedure is repeated until sufficient readings have been obtained to allow the equivalence point to be determined as the intersection of the two linear portions of the graph thus achieved.

The rotating platinum microelectrode was first introduced by Laitinen and Kolthoff in 1941. Figure 17.3 (a) depicts a simple rotating platinum microelectrode which is made out from an usual standard ‘mer-cury seal’. A platinum wire (length : 5.0 mm ; diameter : 0.5 mm) protrudes from the lower end wall of a 21 cm long 6 mm glass tubing, which is bent at an angle of 90°. There are holes (H) in the stem of the mercury reservoir for making electrical contact with it. The mercury reservoir is provided with a flange fitted inward to prevent Hg from being thrown out.

Figure 17.3 (b) illustrates the electric circuit. The electrical connection is duly done to the electrode by means of a strong amalgamated Cu-wire passing through the glass tubing to the lower end of the Hg covering the sealed-in platinum wire ; the upper end of which passes through a small hole made in the stem of the stirrer and dips well into the Hg present in the Hg seal. Subsequently, a wire from the Hg seal is connected to the source of applied voltage. The glass tubing serves as the stem of the electrode that is rotated at a constant speed of 600 rpm. 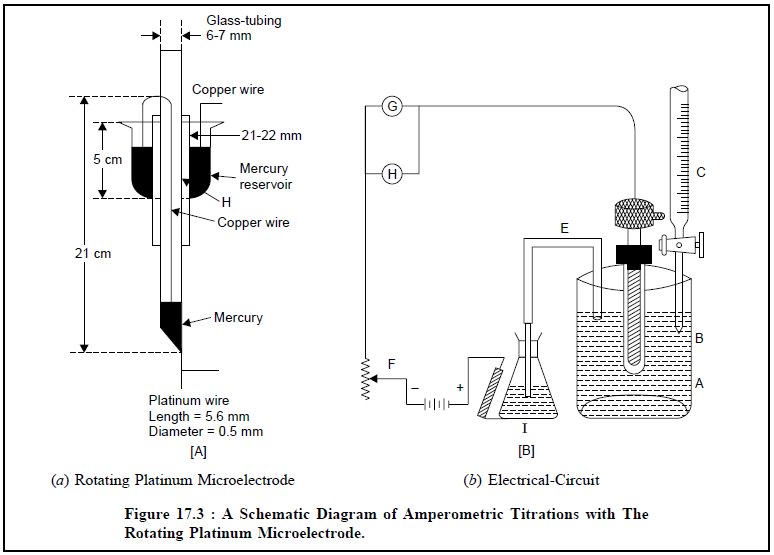 Dead-stop-end-point method was first introduced by Foulk and Bawden* in 1926. Evidently, this particular technique is a modification of the classical amperometric titration. This technique is specifically applicable to only such systems where the phenomenon of oxidation-reduction exists both before as well as after the equivalence point has been duly accomplished.

It essentially makes use of two identical, stationary microelectrodes immersed in a well stirred solu-tion of the sample. A small potential ranging between these electrodes ; and the resulting current is measured subsequently as a function of the volume of reagent added. The end-point is distinctly characterized by a sudden current rise from zero or a decrease in the current to zero or a minimum at zero in a V-shaped curve.

Though this technique was first used in 1926, but it received its due recognition only around 1950**. F

igure 17.4 represents a simple diagram of an amperometric titration assembly with twin-polarized microelectrodes. 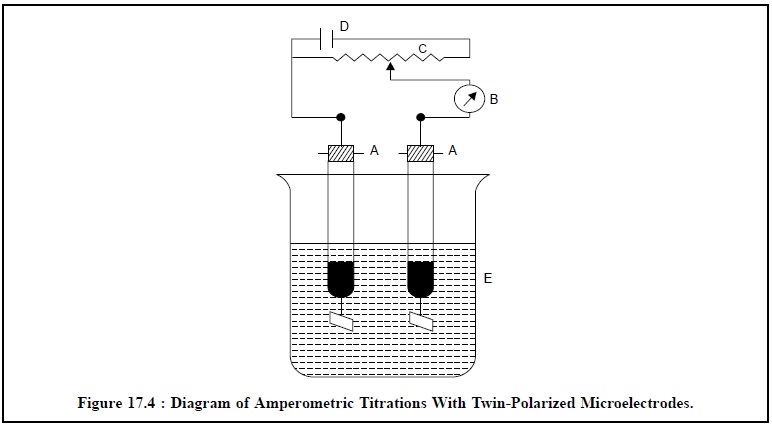 The various components are as follows :

A, A = Twin-polarized Platinum microelectrodes,

The potentiometer is adjusted in such a fashion that there is a distinct potential drop of about 80 to 100 millivolts between the two platinum electrodes.