Alopecia areata (AA) is most likely a T-cell-mediated disease of a skin appendage, the hair follicle, and thus can be classified as an inflammatory skin disease.

Alopecia areata (AA) is most likely a T-cell-mediated disease of a skin appendage, the hair follicle, and thus can be classified as an inflammatory skin disease. The condition is quite common because about 1.7 percent of the population experience an episode of AA during their lifetime. AA may be focal, affecting only one small region of the skin (Figure 10.2), or more generalized total hair loss from the scalp (alopecia totalis) or scalp and body (alopecia universalis). 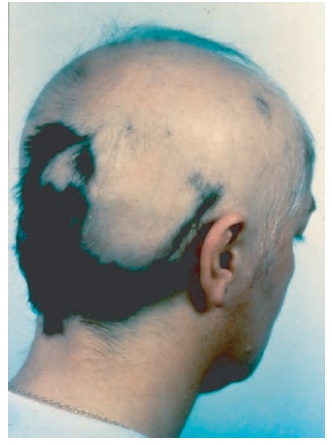 Figure 10.2 The patient has nonscarring alopecia areata covering >90 percent of his scalp. White tufts of hair near the temples are evidence of hair regrowth during active inflammation in the hair bulb, which inhibits pigment transfer from melanocytes to keratinocytes and hair.

Normal hair growth cycle can be broken down into three phases (1) anagen growth phase lasting three or more years, (2) cata-gen transitional period lasting two to four weeks, and (3) telogen phase when the hair follicle advances from the inferior segment of the follicular sheath into the isthmus and is eventually shed, either by traction or from being pushed out by a new hair in anagen phase. Hairs affected by AA end the ana-gen phase prematurely and enter into telo-gen, resulting in precipitous hair shedding. Because AA does not result in destruction/ scarring of the hair follicle, “lost” hairs may eventually grow back, first appearing as “exclamation point” hairs along the border  of focal hair loss. These pathognomonic exclamation point hairs are broader at their distal ends, hence the name.

Although the exact mechanism of path-ological events is still unknown, there is a growing body of evidence indicating that it is a T-cell-mediated autoimmune disease as follows:

1.           The mononuclear infiltrate surrounding the hair follicle is primarily composed of CD4 and CD8+ T cells as well as mac-rophages.

2. Type I T cells produce IFN-γ, which is associated with increased expression of HLA-DR, HLA-ABC, and ICAM-1 in the follicular epithelium, resulting in increased leukocyte trafficking from blood into the hair follicle.

3. Hair regrowth is reproducibly induced by immunosuppressive drug treat-ment, including local corticosteroid injections and the use of systemic cyclosporine.

4.           Lesional scalp from AA patients grafted onto SCID mice regrows, coinciding with the loss of the infiltrating lympho-cytes in the graft. Furthermore, hair loss can be transferred to human scalp explants in SCID mice by injection of lesional T cells.

Circulating autoantibodies to follicular structures have been reported in biopsies of AA patients but have also been reported in normal controls. These autoantibodies have also been seen in C3H/HeJ mice and DEBR rats but do not appear pathogenic in either mice or humans. Also one cannot transfer AA by injection of patient IgG into human skin explants.

In contrast, C3H/HeJ mice develop spontaneous hair loss with aging and dem-onstrate many features of AA, including inflammatory infiltrates and response to intralesional steroids. More important, grafts from C3H/HeJ mice when implanted into C3H/SmNCPrkd (SCID/J) mice do not result in hair loss, which emphasizes the role of the host immune system. In common with human AA, there is elevated expression of MHC class I and II antigens and ICAM-1 in the skin of these animals, and they respond to topical immunother-apy like humans.

As in many other autoimmune dis-eases, there is a genetic susceptibility to the disease. AA has HLA associations with DQB/*03 and possibly HLA-A. These associations suggest a role for CD4+ T cells in AA but association with HLA, ABC was not examined in these studies, thus excluding the possible role of CD8+ T cells. Autoimmune diseases result from many factors, and it is probable that AA is polygenic with multiple potential routes of genetic susceptibility. In addition to HLA genes, there is known genetic polymor-phism in cytokine receptors and antigen-processing molecules. Thus, genetics alone is unlikely to supply a complete explana-tion of disease development.

If there is a T-cell-mediated compo-nent to this disease coupled with a genetic susceptibility, what antigens stimulate this T-cell activation? Among the recent hypothesis has been the suggestion that the autoantigen in AA is the melanocyte. Evidence that supports this conclusion includes the clinical observation that with disease activity pigmented hairs are lost more quickly then nonpigmented/white hairs. Second, melanocytes are a significant component of the hair bulb, which is the site of the immunological attack. Finally, there is an association of AA with vitiligo – a disease of focal melanocyte ablation. Sup-portive evidence can also be found in the animal models. Using SCID mice with skin grafts obtained from AA patients, mela-nocyte-associated peptides are capable of activating lesional T cells to induce hair loss. However, melanocyte antigens may not be the only autoantigens capable of stimulating these cells.

Treatment at present is related to the observation that AA appears to be medi-ated by a TH1 response with production of IFN-γ. Psoriasis also has a TH1 response. IL-10, which inhibits TH1 responses, was found to be effective in psoriasis in a phase II clinical trial. On the basis of these results and a small trial in AA, the use of IL-10 in intralesional AA might be warranted. The same might be said of alefacept and mono-clonal antibodies that are directed against CD11a (LFA-1) or CD4 cells. All of these immunomodalities are presently available and could be considered as potential new therapeutics if an appropriate risk-to-bene-fit equation is established in clinical trials.