The process of increasing the pressure of air, gas or vapour by reducing its volume is what compression.

A history associated with air compressors like a device goes back in order to antiquity.

Guy offers utilized compressors data compression with regard to a large number of many years in order to warmth their house, prepare meals, as well as proceed items. The first kind of compressor had been the bellows accustomed to great time compacted compressors on to the fireplace. These types of easy compressing models had been possibly driven through guy or even creatures in order to shrink. They were changed through mechanized air compressors that have been employed for commercial reasons. Along with improvements within technology, compressors had been decreased in dimensions as well as discovered utilizes beyond industrial facilities because helps with regard to marine scuba diving in order to energy pneumatic resources as well as exercises.

Ø The process of increasing the pressure of air, gas or vapour by reducing its volume is what compression.

Ø The devise used to carry out this process is called a compressor.

Principles on which compressors work:

Ø A compressor is a mechanical device that increases the pressure of a gas by reducing its volume.

Ø Compressor is a machine which increases the pressure of a fluid by mechanically decreasing its volume (i.e. by compressing it).(The fluid here is generally air since liquids are theoretically incompressible).

Ø Compressed Air is often described as the fourth utility, although not as ubiquitous as electricity, petrol and gas, it plays a fundamental part in the modern world.

Ø The importance of compressed air is often over looked, but in reality it plays a vital part in most modern manufacturing processes and modern civilization.

Ø Although we may not realize it most products we use today could simply not be made without compressed air.

Ø Compressed air accounts for about 10% of the global energy used in industry today.

Ø With so many applications in different environments being dependant on compressed air, the compressors not only have to compress the air to a specific pressure, at a certain flow, it has to deliver air of the right quality.

Ø To most people, a compressor is all that is required to compress air, but to obtain the right quality of the compressed air, more equipment is often needed.

Ø Filters and dryers are often needed to remove oil and water before it reaches the application.

Ø Compressed Air has a range of completely oil-less compressors where air comes into contact with the process it serves and so the quality is critical, for example in where a compressor may be used in a food packaging role. 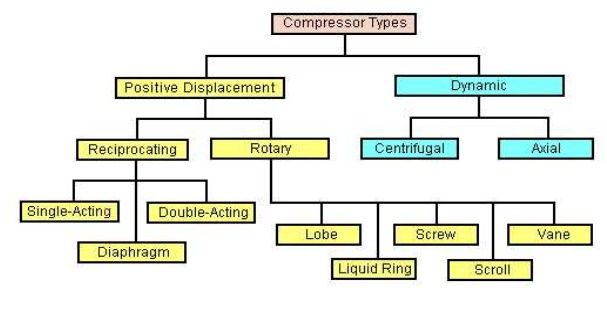 Ø In the positive-displacement type, a given quantity of air or gas is trapped in a compression chamber and the volume it occupies is mechanically reduced, causing a corresponding rise in pressure prior to discharge.

Ø The velocity energy is changed into pressure energy both by the impellers and the discharge volutes or diffusers.

Ø In the centrifugal-type dynamic compressors, the shape of the impeller blades determines the relationship between air flow and the pressure (or head) generate.

Ø In a reciprocating compressor, a volume of gas is drawn into a cylinder; it is trapped and compressed by piston, then discharged into the discharge line.

Ø The cylinder valves control the flow of gas through the cylinder; these valves act as check valves. 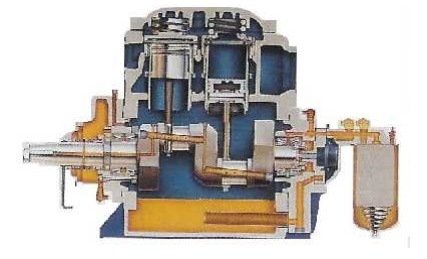 Ø The piston is driven by a crank shaft via a connecting rod.

Ø At the top of the cylinder are a suction valve and a discharge valve.

Ø A reciprocating compres sor usually has two, three, four, or six cylinders in it. 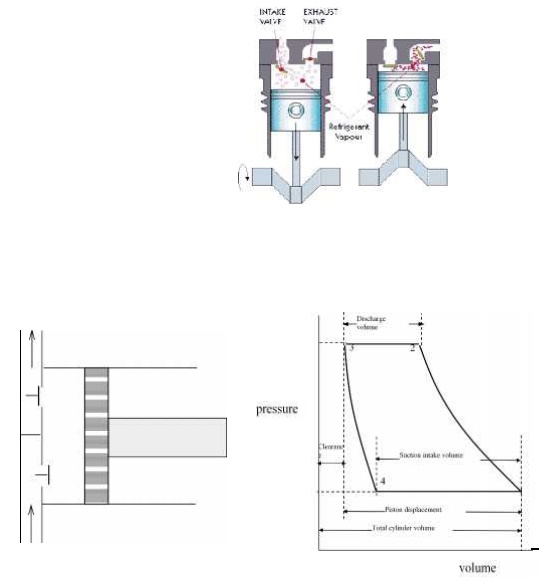 Ø The suction valve opens at point 4.

Ø As the piston travels toward the bottom dead center, the volume of the c ylinder increases and the vapor flows into the cylinder.

Ø The pressure inside the cylinder is slightly less than suction line pressu re. The pressure difference pushes the val ve open on during the suction stroke.

Ø At point 2, the pressure inside the cylinder has become slightly greater than discharge line pressure.

Ø This causes the valve opening allowing the gas to flow out of the cylinder.

Ø The volume continues to decrease toward point 3, maintaining a sufficient pressure difference across the discharge valve to hold it open.

Ø At point 3, the piston reaches the top dead center and reverses direction.

Ø At top dead center, as the piston comes to a complete stop prior to reversing direction, the pressure across the valve is equal.

Ø So, the discharge valve is closed.

Ø As the piston moves towards point 4, the volume increases and the pressure decreases in the cylinder.

Ø The gas trapped in the cylinder expands as the volume increases until to point 4.

Ø At point 4, the gas pressure inside the cylinder becomes less than the suction line pressure, so the suction valve opens again.

Ø The cycle then starts over again.

What is the difference between a single and two stage compressor?

Ø In a single stage piston compressor the air is drawn into a cylinder and compressed in a single piston stoke to a pressure of approximately 120 PSI. Then it is send to the storage tank. All rotary compressors are single stage.

Ø In a dual stage pump the first stage cylinder is always a larger diameter. Also a dual stage pump will always have an inter cooler tube or finned housing attached to the pump to cool the air before being compressed a second time.

Rotary vane compressors consist of a rotor with a number of blades inserted in radial slots in the rotor.

Ø The rotor is mounted offset in a larger housing that is either circular or a more complex shape. As the rotor turns, blades slide in and out of the slots keeping contact with the outer wall of the housing. Thus, a series of decreasing volumes is created by the rotating blades. 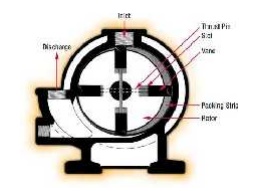 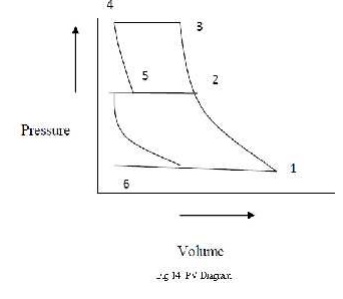 A multi-stage compressor is one in which there are several cylinders of different diameters. The intake of air in the first stage gets compressed and then it is passed over a cooler to achieve a temperature very close to ambient air. This cooled air is passed to the intermediate stage where it is again getting compressed and heated. This air is again passed over a cooler to achieve a temperature as close to ambient as possible. Then this compressed air is passed to the final or the third stage of the air compressor where it is compressed to the required pressure and delivered to the air receiver after cooling sufficiently in an after-cooler.

The work done in compressing the air is reduced, thus power can be saved

2. Prevents mechanical problems as the air temperature is controlled

3. The suction and delivery valves remain in cleaner condition as the temperature and vaporization of lubricating oil is less

4.    The machine is smaller and better balanced

5. Effects from moisture can be handled better, by draining at each stage

7.  Compression ratio at each stage is lower when compared to a single-stage machine

Considering clearance volume: With clearance volume the cycle is represented on Figure. The work done for compression of air polytropically can be given by the are a enclosed in cycle 1-2-

3-4. Clearance volume in compressors varies from 1.5% to 35% depending upon type of compressor. 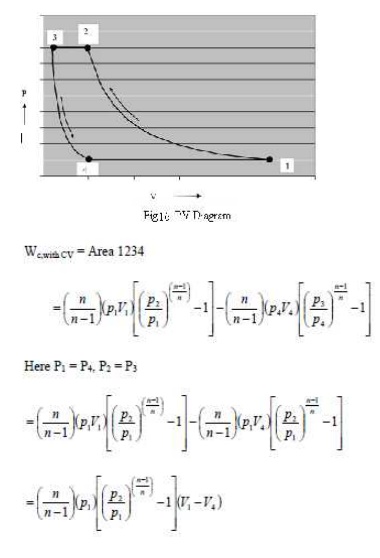 In the cylinder of reciprocating compressor (V1-V4) shall be the actual volume of air delivered per cycle. Vd = V1 – V4. This (V1 – V4) is actually the volume of air in hated in the cycle and delivered subsequently.

If air is considered to behave as perfect gas then pressure, temperature, volume and mass can be inter related using perfect gas equation. The mass at state 1 may be given as m1 mass at state 2 shall be m1, but at state 3 after delivery mass reduces to m2 and at state 4 it shall be m2. 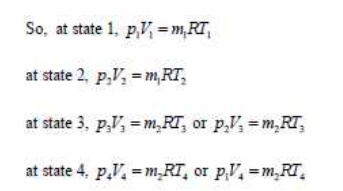 Ideally there shall be no change in temperature during suction and delivery i.e., T4 = T1 and T2 = T3 from earlier equation 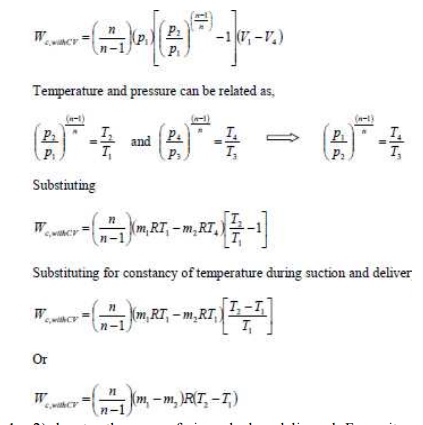 Thus (m1-m2) denotes the mass of air sucked or delivered. For unit mass of air delivered the work done per kg of air can be given as,

Thus from above expressions it is obvious that the clearance volume reduces the effective swept volume i.e., the mass of air handled but the work done per kg of air delivered remains unaffected. From the cycle work estimated as above the theoretical power required for running compressor shall be, 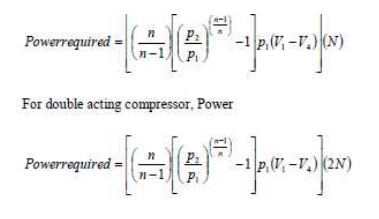 Here free air condition refers to the standard conditions. Free air condition may be taken as 1 atm or 1.01325 bar and 15oC or 288K. consideration for free air is necessary as otherwise the different compressors can not be compared using volumetric efficiency because specific volume or density of air varies with altitude. It may be seen that a compressor at datum level (sea level) shall deliver large mass than the same compressor at high altitude. This concept is used for giving the capacity of compressor in terms of „free air

Where subscript a or pa, Va, Ta denote properties at free air conditions 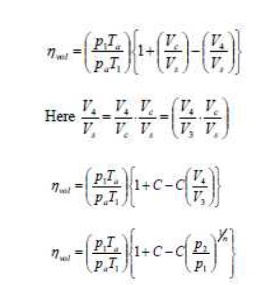 Mathematical analysis of multistage compressor is done with following assumptions:

(ii)   There is  perfect  inter  cooling between  compression

From combined p-V diagram the compressor work requirement can be given as, 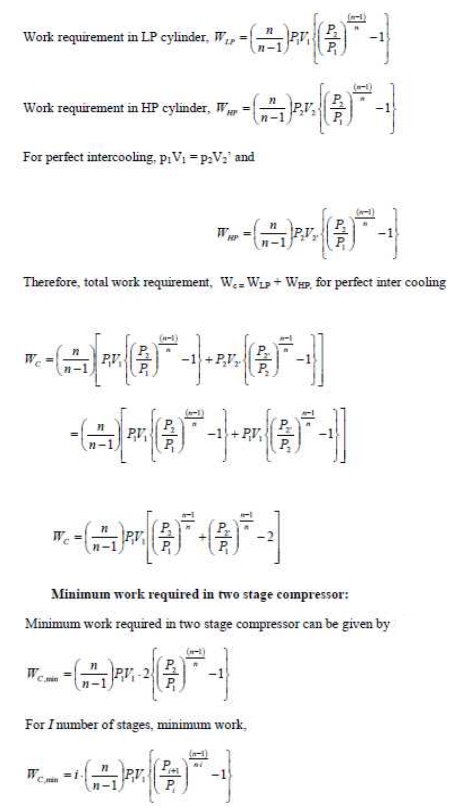 Ø Reciprocating compressors are typically used where high compression ratios (ratio of discharge to suction pressures) are required per stage without high flow rates, and the process fluid is relatively dry.

Ø Air compressors: a compressor that takes in air at atmospheric pressure and delivers it at a higher pressure.

Ø Compressors serve the basic necessities & form an integral part of the company .