Learning Objectives - Students will be able to: * describe the features of agriculture. * list and explain differnt types of farming and irrigation. * name the various crops grown in Tamil Nadu.

* describe the features of agriculture.

* list and explain differnt types of farming and irrigation. 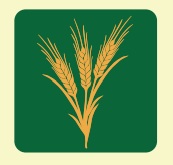 Agriculture is the art and science of preparing the soil for cultivation, growing crops andraising livestock. It has become a necessity for the humans. Agriculture led to the development of human civilisation. 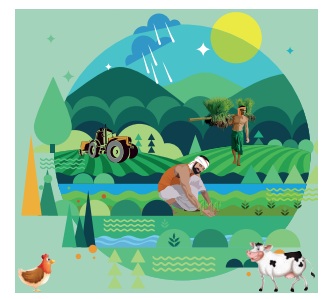 India is an agricultural country. One-third of our nation‛s income comes from agriculture. Agricultural development contributes to the economy of our country.

A farmer is a person who cultivates crops and rears animals (poultry and other livestock). India is a land of farmers. It is called so because majority of Indians are directly or indirectly involved in agricultural activities. Agriculture is the backbone of our economy. 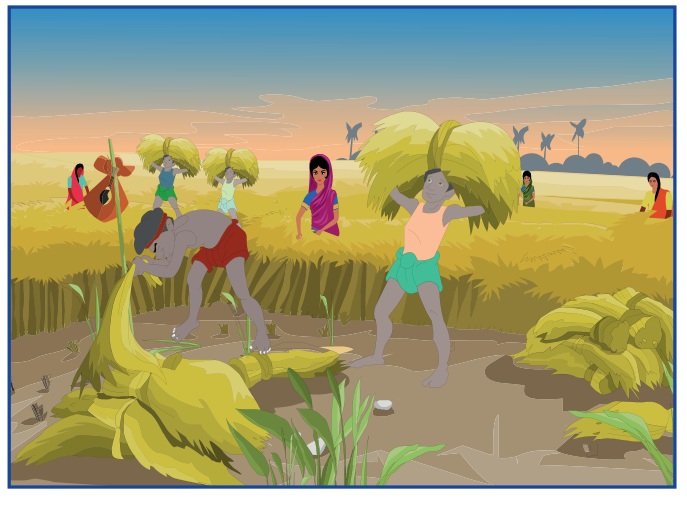 Farmers who cultivate in an area less than 1 hectare are called micro farmers.

There are several types of farming. 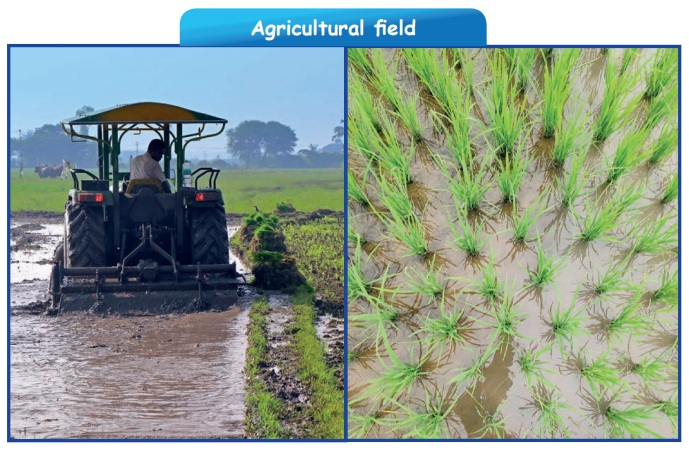 In subsistence farming, crops are cultivated and used only for own family consumption. Such type of farming is adopted by small and marginal farmers on fragmented land holdings. The cultivated crops are usually food crops. The method of this farming is generally archaic. 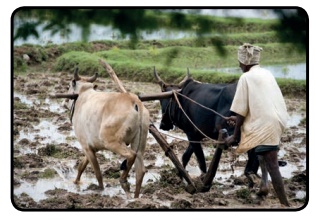 Unlike subsistence farming, here the crops are cultivated for commercial use and is sold in markets. This method of farming is done by using modern tools and techniques 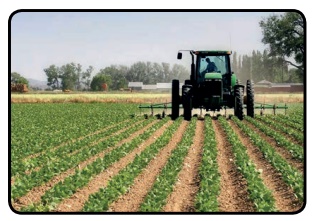 Plantation Farming is done in an estate where a single cash crop is cultivated on a large scale. Examples: Tea, Coffee and Rubber. 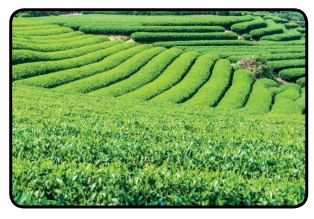 Mixed farming refers to the rearing of animals along with the cultivation. This type of farming is economical. 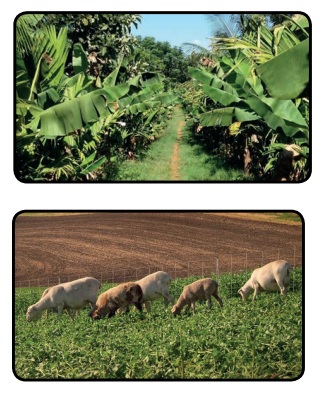 The Government has set up agencies like the Food Corporation of India to purchase the farm products directly from the farmers at reasonable rates.

Help the farmer to reach his filed. 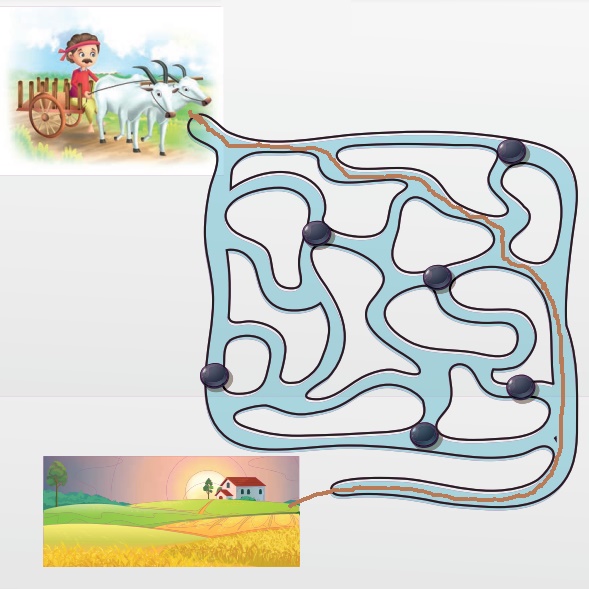 In order to eliminate the middlemen between farmers and consumers, the Government of Tamil Nadu introduced the new concept, namely UZHAVAR SANTHAI

There are no perennial rivers in Tamil Nadu. Tamil Nadu depends on Northeast and Southwest monsoon. Hence, agriculture in Tamil Nadu is dependent on ground water.

Central Ground Water Board (CGWB) monitors the level and nature of ground water.

Irrigation is the supply of water to land or crops for the purpose of agricultural production.

Well irrigation has been practised in Tamil Nadu for many generations. It is a less expensive type of irrigation. 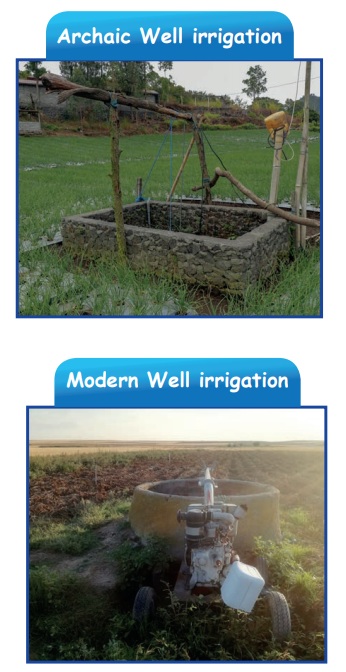 Canal irrigation is the most important form of irrigation in India. Most of the North Indian canals are perennial. The main canal irrigated areas are in the northern plains of India such as Uttar Pradesh, Punjab, Haryana, Rajasthan and Bihar.

Green revolution is a process which brought an increase in crop production by using new varieties of seeds, pesticides and new agricultural techniques. 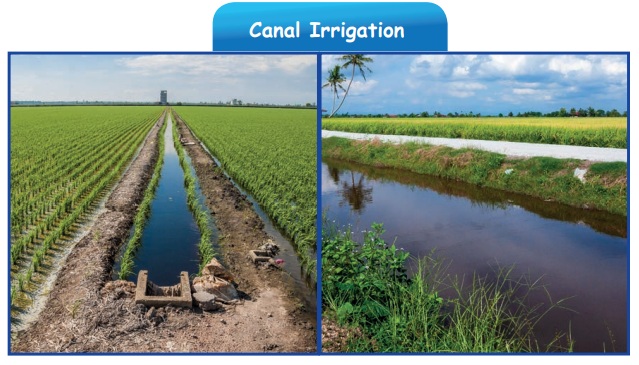 Dr.M.S. Swaminathan of Tamil Nadu is known as Father of Green Revolution in India.

Sprinkler irrigation is similar to natural rainfall. Water is sprayed through pipes in the air through sprinklers. 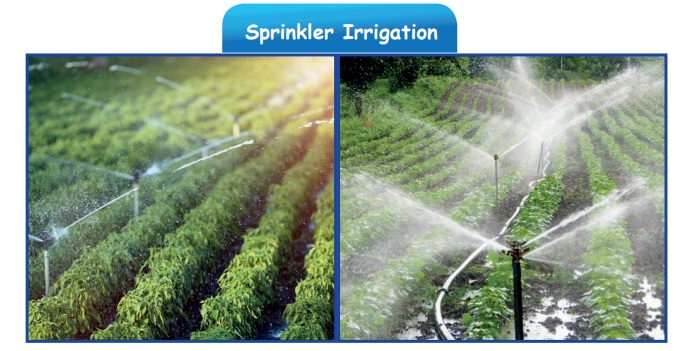 Drip irrigation is a type of micro-irrigation system that saves water and soil nutrients. In this system water drips slowly into the roots of plants through pipes. Pipes can be either above the soil surface or buried below the surface. The water directly reaches the roots and minimises evaporation.

Find out the following.

1. One who produces food for us. Farmer

2. It is used for ploughing. Tractor

3. It is used for separating grain from hay. Winnower

Animal husbandry is the branch of agriculture. It is to raise animals for meat, fur, milk, eggs and other products. 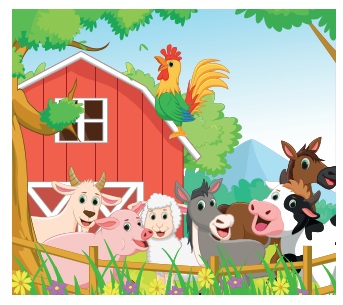 Horticulture is the science or art of cultivating fruits, vegetables, flowers or ornamental plants.

Tamil Nadu has different types of soil, rainfall and weather across its districts. It is suitable for the production of fruits, vegetables, spices, plantation crops, flowers, medicinal and aromatic plants. Horticulture is the fastest growing sector within agriculture in Tamil Nadu.

Paddy is grown in large areas because rice is the main staple food of the state. 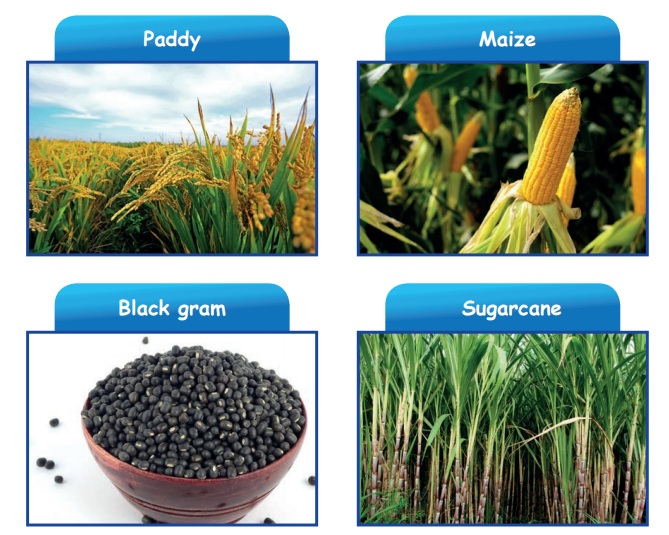 Mango and Banana are the leading fruit crops of Tamil Nadu.

The main flowers grown in Tamil Nadu are Jasmine, Chrysanthemum, Marigold and Rose.

Thanjavur is an important agricultural centre located in the Cauvery Delta. It is known as the Rice bowl of Tamil Nadu.

Which State is known as the Rice bowl of India?

Answer: Andhra Pradesh is known as the Rice bowl of India.

Coimbatore is the largest cotton producing district in Tamil Nadu. It is known as the Manchester of South India.

* India is an agricultural country.

* Indian farmers are the backbone of the Indian economy.

* There are several methods of farming systems in India.

* There are four basic types of irrigation.