The mobilization of a T-lymphocyte–mediated cytotoxic response following an intracellular infection is a relatively ineffective process.

The mobilization of a T-lymphocyte–mediated cytotoxic response following an intracellu-lar infection is a relatively ineffective process. In a resting immune system, the cytotoxic T-cell precursors exist in relatively low numbers ( <1/105). Proliferation and differentiation are required to generate a sufficient number of fully activated effector CD8+ T cells. Even the response of a primed individual takes a few days. Thus, an effective primary cytotoxic T-cell primary response is seldom deployed in less than a few days and may take as long as 2 weeks. During this time the host depends on defenses that can be deployed much more rapidly, such as the production of type I interferons ( α and β ), initiated as soon as the virus starts replicating, and the activity of natural killer (NK) cells. These two effector systems are closely related: type I interferons activate NK cell functions; both are particularly ef-fective as defenses against viral infections.

NK cells receive activation signals both from T lymphocytes and from monocytes/ macrophages. Those signals are mediated by cytokines released from those cells, particu-larly IL-2, interferon- α, and IL-12.

1.           NK cells constitutively express a functional IL-2 receptor that is predominantly constituted by the β chain (p75 subunit), and for this reason NK cells are, for the most part, CD25 . This variant of the IL-2 receptor enables NK cells to be ef-fectively activated by IL-2 produced by activated helper T cells early in the im-mune response, without the need for any additional co-stimulating factors or sig-nals. IL-2–activated NK cells are also known as lymphokine-activated killer cells (LAK cells).

2.           Interferons  α  and β  enhance the cytotoxic activity of NK cells. Thus, the release of these interferons from infected cells mobilizes nonspecific defenses before the differentiation of MHC restricted cytotoxic T lymphocytes is completed.

B. Target Recognition by NK Cells

The mechanism of recognition of target cells by NK cells has not been as clearly defined as the mechanisms of antigen recognition for B and T lymphocytes. A major difference is that NK cells can recognize virus-infected cells and many different types of malignant cells without clonal restriction. In other words, their recognition mechanisms are relatively non-specific and common to all NK cells. At this time, it is believed that two broadly reactive receptors are involved, one of which delivers activating signals, and the other which deliv-ers inhibitory signals (Fig. 11.9).

1.           The triggering or activating receptor (NKAR, NKR-P1) recognizes membrane glycoproteins, probably with greater affinity when modified as a consequence of malignant transformation or viral infection.

2.           The inhibitory receptor (NKIR, p58,70) prevents NK cells from killing normal host cells. It has a molecular weight of 54 kDa and interacts with the complex formed by class I MHC molecules (particularly HLA-C and HLA-B) and their associated self peptides. Most NK cells express a variety of NKIR molecules with different MHC specificities. 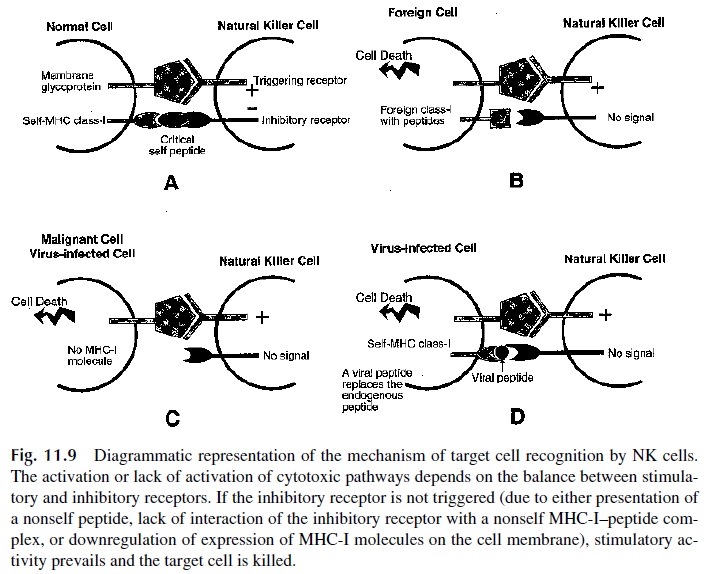 C. Activation of NK Cells as a Result of Viral Infection and Malignant Transformation

Viral infection and malignant transformation not only can change the constitution of mem-brane glycoproteins but can also interfere with the interaction of HLA molecules with the inhibitory receptor. This interference may be due to replacement of a self peptide on HLA-C by a nonself peptide or to downregulation of the expression of MHC-I molecules on the infected cell membrane, a phenomenon frequently associated with viral infection. In either case, the end result will be that the triggering receptor will deliver a signal that is not coun-teracted by a signal from the inhibitory receptor. Consequently the NK cell will be able to proceed with the destruction of the target cell by mechanisms similar to those described for T-lymphocyte–mediated cytotoxicity.

NK cells express the FcγRIII, a low-affinity Fc receptor that binds IgG-coated cells. IgG binding results in the activation of the NK cell and lysis of the target, a process known as antibody-dependent cellular cytotoxicity (ADCC). ADCC-dependent activation and killing is not inhibited by the NKIR (p58,70) inhibitory receptor.