An essential function of cell-mediated immunity is the defense against intracellular infec-tious agents, particularly viruses. For example, circulating T lymphocytes isolated from in-dividuals who are recovering from measles infection destroy MHC-identical fibroblasts in-fected with this virus in 2–3 hours. A number of experimental models have provided insights into the mechanisms of lymphocyte-mediated cytotoxicity against virus-infected cells.

A. Simulation, Activation, and Differentiation of Cytotoxic T Lymphocytes

The first signal leading to the differentiation of cytotoxic T lymphocytes involves recogni-tion of a viral peptide associated with an MHC-I molecule. As pointed out, such recognition is only possible if the TcR and MHC-I molecules are able to inter-act weakly in the absence of the viral-derived oligopeptide, and this is only possible when the two interacting cells are MHC-identical, because only T lymphocytes able to interact with self MHC molecules are selected during differentiation .

Strongly activated CD8+ cells have been shown to release cytokines, including IL-2, but simple contact with a virus-infected target cell does not induce this level of activation and does not trigger the proliferation of CD8+ T lymphocytes. Under these conditions, pro-liferation and differentiation of CD8+ cells appears to require IL-2 and other cytokines re-leased by activated helper CD4+ T lymphocytes. Thus, the responding T-lymphocyte pop-ulation contains a mixture of CD4+ and CD8+ cells, and the stimulating population of viral-infected cells must present viral antigens in association with both MHC class I and MHC class II molecules. The CD4+ T lymphocytes will recognize viral antigens associ-ated with class II MHC molecules, while the CD8+ T lymphocytes recognize viral antigens complexed to class I MHC molecules.

B. Characteristics of Cytotoxic T Lymphocytes

The cytotoxic reaction takes place in a series of successive steps (see Fig. 11.7):

The first step in the cytotoxic reaction involves the conjugation of cytotoxic T cells with their respective targets. This conjugation involves, in the first place, the recognition by the TCR of a peptide–MHC-I complex. However, additional interactions are required to achieve the strong adhesion of the T cell to the target cell required for effective killing:

·              The CD8+ molecule itself interacts with the nonpolymorphic domain of the MHC class I molecule, specifically with its 3 domain. The avidity of this interaction increases after TcR occupancy.

·              The CD2 molecule, present on all T cells, interacts with the CD58 molecules ex-pressed by the target cells. Any resting T cell can interact with CD58+ cells, but this interaction by itself is weak and does not lead to cell activation. The modification of the CD2 molecule after TcR engagement increases the affinity of the interaction between CD2 and CD58. 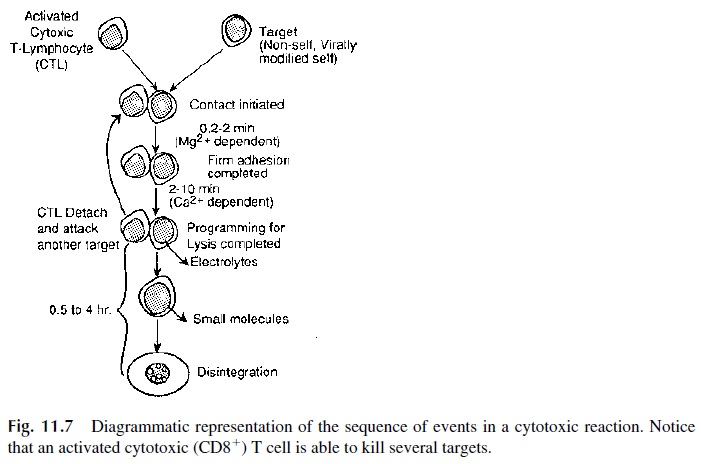 ·              In addition, the interaction between LFA-1 and ICAM-1 provides additional stabi-lizing bonds between the interacting cells. LFA-1 avidity for its ligand(s) is also upregulated by T-cell activation.

The conjugation of CD8+ T cell to its target cell is firm but transient, and after about 30 minutes the affinity of ICAM-1 for LFA-1 and of CD58 for CD2 reverts to resting levels. The cytotoxic T cell can then move on to another antigen-bearing target with which it will develop the same interaction.

During the short period of intimate contact with its target, a series of reactions takes place, eventually resulting in the killing of the target cell.

First, the cytoskeleton of the cytotoxic cell reorganizes. The microtubule-organizing center and the Golgi apparatus reorganize in the direction of the area of contact with the tar-get cell. This is associated with transport of cytoplasmic granules towards the target. When the cytoplasmic granules reach the membrane, their contents are emptied into the virtual space that separates the cytotoxic T cells and target cells. These granules contain a mixture of proteins, including perforins and granzymes.

Perforins polymerize as soon as they are released, forming polyperforins. These are inserted in the target cell membrane, where they form transmembrane channels. The for-mation of these channels may lead to influx of water into the cell and may cause cell death in a manner analogous to the effects of the assembly of the terminal complement compo-nents on a cell membrane. On the other hand, the perforin channels are believed to facili-tate the penetration of granzymes A and B into the target cell. Once in the cytoplasm of the target cell, granzymes activate proteolytic enzymes (caspases), which initiate a cascade of events leading to apoptotic death of the target.

Apoptosis, or programmed cell death, is characterized by nuclear and cytoplasmic changes. At the nuclear level, DNA is degraded and fragmented. The cytoplasm shows condensation and there is an abnormal increase of membrane permeability, especially significant at the mitochondrial level.

The nuclear alterations involve the activation of a series of caspases, cysteine pro-teases that cleave after aspartic acid residues, which includes 13 different enzymes. Of those, some are considered as initiators of the sequence that leads to apoptosis (e.g., cas-pase 8 and 9), while others are considered as effector caspases involved in the final steps of the cycle (e.g., caspase 3 and 7). All caspases exist as inactive proenzymes that need to be cleaved by proteases, and granzymes appear to be able to activate the effector caspases, either directly or through a pathway mediated by increased mitochondrial membrane per-meability and release of cytochrome c and other caspase activators. This leads to the acti-vation of initiator caspases, particularly caspase 9. Once activated, the effector caspases such as caspase 3 cleave an endonuclease-inactivating protein that forms an inactive com-plex with a cytoplasmic DNAse. As that protein is digested, the endonuclease becomes ac-tive, translocates to the nucleus, causing the DNA breakdown that is characteristic of apop-totic cell death (Fig. 11.8). 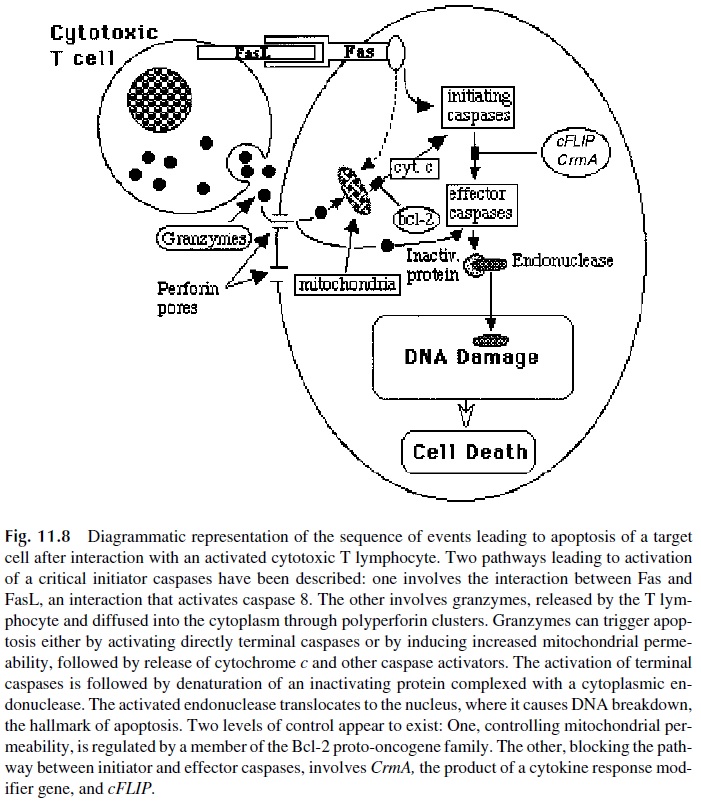 Experiments carried out with animals transgenic for the hepatitis B virus (HBV) sug-gest that activation of both pathways seems to be a requirement for efficient cytotoxicity in vivo. These animals were injected with cytotoxic T-cell clones from three different groups of mice:

Although the clones from all animals could kill HBV-infected cells in vitro, only clones ex-pressing both the FasL and the perforin genes caused cytotoxicity in vivo.

Because the expression of Fas and FasL is very widespread, even in resting cells, there are negative control mechanisms to avoid unnecessary triggering of the pathway. Two proteins seem to play major roles blocking the caspase 8 apoptosis pathway induced by Fas-FasL interactions (cFLIP and CrmA, the product of a cytokine response modifier gene). On the other hand, a protein encoded by the proto-oncogeneBcl-2, blocks the mito-chondrial pathway to apoptosis.