The presence of any of these disorders requires investigation of both the hypothalamic–pituitary–gonadal axis as well as the reproductive outflow tract.

The initial evaluation should begin with measurement of pi-tuitary gonadotropin (follicle-stimulating hormone [FSH] and luteinizing hormone [LH]) levels, which helps distin-guish a hypothalamic–pituitary etiology from a gonadal etiology. 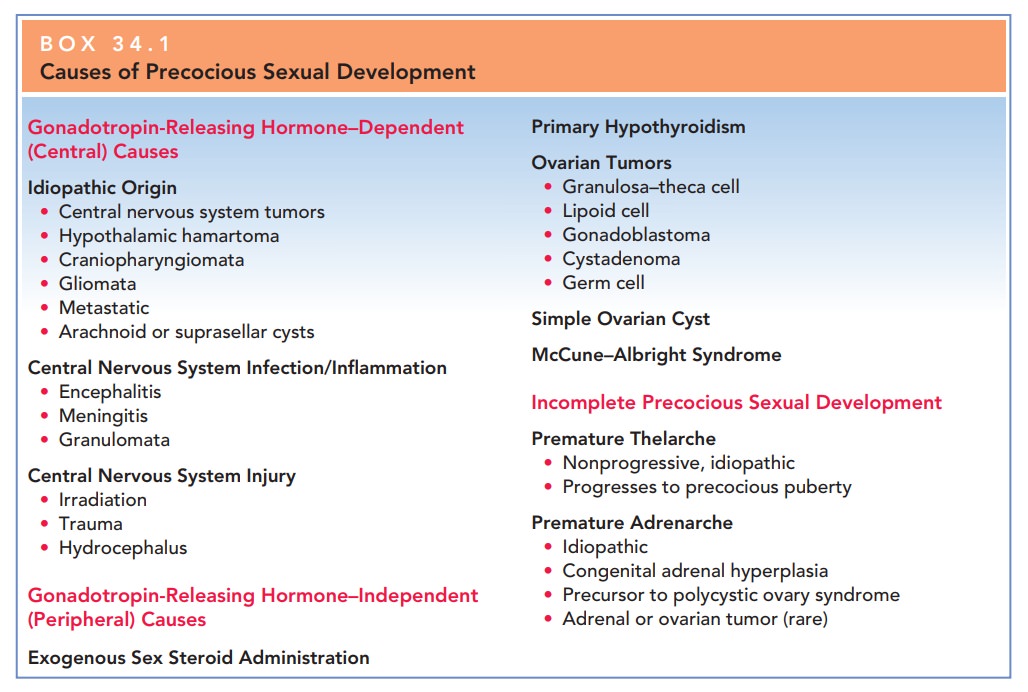 McCune–Albright syndrome (polyostotic fibrous dysplasia) is characterized by multiple bone fractures, café-au-lait spots, and precocious puberty. Premature menarche can be the first sign of the syndrome.

The syndrome is thought to result from a defect in cellular regulation with a mutation in the alpha subunit of the G protein that stimulates cAMP formation, which causes affected tissues to function autonomously. This mutation causes the ovary to produce estrogen with-out the need for FSH, resulting in sexual precocity.

Adrenal causes of precocious puberty include adrenal tumors or enzyme-secreting defects, such as congenital adrenal hyperpla-sia (CAH). Tumors are very rare and must secrete estrogento cause early sexual maturation. The most common form of CAH, 21-hydroxylase deficiency, presents at birth with the finding of ambiguous genitalia. However, the nonclassical form, previously known as late-onset CAH, tends to present at adolescence. In this disorder, the adrenal glands are unable to produce adequate amounts of cortisol as a result of a partial block in the conversion of 17-hydroxyprogesterone to deoxycortisol. Deficiency of the 21-hydroxylase enzyme leads to a shunting away from aldosterone and cortisol production in cholesterol biosyn-thesis toward the production of androgens (testosterone and estradiol), which results in precocious adrenarche. Apathognomonic finding for 21-hydroxylase deficiency is an elevated 17-hydroxyprogesterone level. Plasma renin is also measured todetermine the amount of mineralocorticoid deficiency. Medical therapy is instituted as early as possible and is aimed at steroid/mineralocorticoid replacement, depending on the severity of the deficiency. In the nonclassical form of CAH, patients present with premature adrenarche, anovulation, and hyperandrogenism, appearing somewhat like patients with polycystic ovarian syndrome.

Iatrogenic causes such as drug ingestion must be considered in all children who present with precocious puberty.

These children may exhibit increased pigmentation of the nipples and areola of the breast secondary to ingestion of oral contraceptives, anabolic steroids, and hair or facial creams.

There is wide variation in normal pubertal development. However, puberty is considered delayed when secondary sex characteristics have not appeared by age 13, there is no evidence of menarche by age 15 to 16, or when menses have not began 5 years after the onset of thelarche. These findings shouldprompt the physician to initiate a workup to determine the cause of the delay. The most common causes of delayed puberty are shown in Box 34.2. 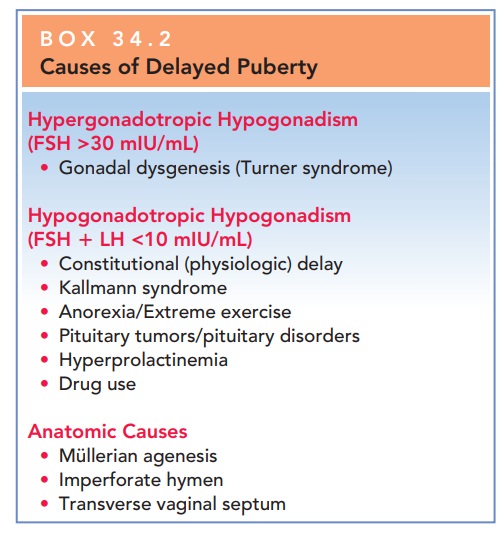 The most common cause of delayed puberty with an elevated FSH is gonadal dysgenesis, or Turner syndrome. In this condition,there is an abnormality in or absence of one of the X chro-mosomes in all cell lines. Patients have streak gonads, with an absence of ovarian follicles; therefore, gonadal sex hor-mone production does not occur at puberty. These pa-tients typically have primary amenorrhea, short stature, webbed neck (pterygium coli), shield chest with widely spaced nipples, high arched palate, and an increased carry-ing angle of the elbow (cubitus valgus) [see Fig. 34.2]. 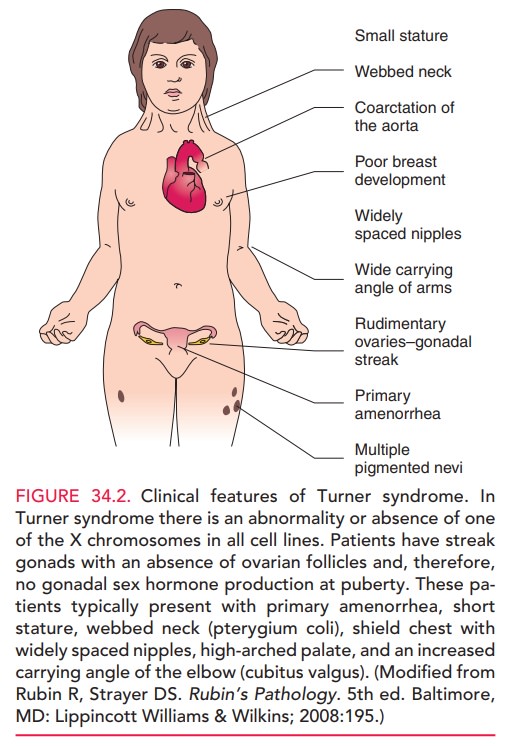 estrogen is administered initially, epiphyseal closure may begin, and long bone growth is truncated and adult height compromised. A delay in estrogen administration can lead to the development of osteoporosis in the teenage years. Progestins should not be given until the patient has reached Tanner stage IV, because premature progestin therapy may prevent the breast from developing completely, thus result-ing in an abnormal contour (a more tubular breast).

The arcuate nucleus of the hypothalamus secretes GnRH in cyclic bursts (or a pulsatile fashion), which stimulates release of gonadotropins from the anterior pituitary gland. Dysfunction of the arcuate nucleus disrupts the short hormonal loop between the hypothalamus and pi-tuitary. As a result, FSH and LH secretion does not occur. Consequently, the ovaries are not stimulated to secrete estradiol, and secondary sexual maturation is delayed. Themost common cause of this type of delayed puberty is constitutional (physiologic) delay. Other causes include Kallmann syndrome;anorexia, exercise, or stress; pituitary tumors/pituitary dis-orders; hyperprolactinemia; and drug use.

Constitutional delay of puberty represents approxi-mately 20% of all cases of delayed puberty. It is thought to bea normal variant of the development process and trends can be seen within families. Children with constitutional delay usuallyhave not only delay of secondary sexual maturation, but also short stature with an appropriate delay of bone maturation.

In the Kallmann syndrome, the olfactory tracts are hypoplas-tic, and the arcuate nucleus does not secrete GnRH. Youngwomen with Kallmann syndrome have little or no sense of smell and do not have breast development. This condition can be diagnosed on initial physical examination by chal-lenging the olfactory function with known odors such as coffee or rubbing alcohol. Once the condition is recog-nized and treated, the prognosis for successful secondary sexual maturation and reproduction is excellent. Secondary sexual maturation can be stimulated by the administration of exogenous hormones or by the administration of pul-satile GnRH. Patients typically can have normal reproduc-tive function. Ovulation is induced by the administration of exogenous gonadotropin, and progesterone is given in the luteal phase to allow implantation of the embryo.

Other causes of hypothalamic amenorrhea include weight loss, strenuous exercise (such as ballet dancing or long-distance running), anorexia nervosa, or bulimia. These conditions allresult in suppressed gonadotropin levels with low estrogen levels. The correction of the underlying abnormality (such as weight gain in patients with weight loss) restores normal gonadotropin levels, stimulating ovarian steroidogenesis and the resumption of pubertal development.

Craniopharyngioma is the most common tumor associated with delayed puberty. This tumor develops in the pituitarystalk with suprasellar extension from nests of epithelium de-rived from the Rathke pouch. The radiologic hallmark is the appearance of a (supra)sellar calcified cyst. Calcifications are present in approximately 70% of craniopharyngiomas.

During fetal life, müllerian ducts develop and fuse in the female fetus to form the upper reproductive tract (i.e., the fallopian tubes, uterus, and upper vagina). The lower and midportion of the vagina develop from the canalization of the genital plate.

Müllerian agenesis, or Mayer-Rokitansky–Küster–Hauser syndrome, is the most common cause of primary amenorrhea in women with normal breast development. In this syndrome,there is congenital absence of the vagina and usually an ab-sence of the uterus and fallopian tubes. Ovarian function is normal, because the ovaries are not derived from müller-ian structures; therefore, all the secondary sexual charac-teristics of puberty occur at the appropriate time. Physical examination leads to the diagnosis of müllerian agenesis. Renal anomalies (e.g., reduplication of the ureters, horse-shoe kidney, or unilateral renal agenesis) occur in 40% to 50% of cases. Skeletal anomalies such as scoliosis occur in 10% to 15% of cases. Mayer-Rokitansky–Küster–Hauser syndrome is generally sporadic in expression, although oc-casional occurrences in families can be seen.

There are several therapeutic approaches to this con-dition. Nonsurgical approaches should be tried first, using dilators and pressure on the dimple between the urethra and the rectum, twice a day. This tissue is quite pliable and, with increasing dilator size, a normal-length vagina can be achieved. An artificial vagina may be created by repetitive pressure by vaginal dilators on the perineum or by surgi-cal construction followed by a split-thickness skin graft. After creation of a vagina, these women are able to have sexual intercourse. With the advances in assisted repro-ductive technologies, including in vitro fertilization (IVF) and use of a surrogate mother (gestational carrier), it is possible for a woman with this condition to have a genetic child by using her oocytes.

The simplest genital tract anomaly is imperforate hymen. In this condition, the genital plate canalization is incom-plete, and the hymen is, therefore, closed. Menarche occurs at the appropriate time, but because there is obstruction to the passage of menstrual blood, it is not apparent. This condition presents with pain in the area of the uterus and a bulging, bluish-appearing vaginal introi-tus. Hymenotomy is the definitive therapy. This condi-tion may be confused with a transverse vaginal septum. Transverse vaginal septa can occur along the vagina at any level and result in obstruction to outflow of menses. A vaginal septum can be resected and primarily repaired via procedure called a Z-vaginoplasty. Prolonged obstruc-tion to menstruation can be associated with an increased incidence of endometriosis.