Failure to ovulate results in either amenorrhea or irregu-lar uterine bleeding. Irregular bleeding that is unrelated to anatomic lesions of the uterus is referred to as anovula-tory uterine bleeding.

Failure to ovulate results in either amenorrhea or irregu-lar uterine bleeding. Irregular bleeding that is unrelated to anatomic lesions of the uterus is referred to as anovula-tory uterine bleeding. It is most likely to occur in asso-ciation with anovulation as found in polycystic ovarian disease, exogenous obesity, or adrenal hyperplasia.

Women with hypothalamic amenorrhea (hypothalamic– pituitary dysfunction) and no genital tract obstruction are in a state of estrogen deficiency. Estrogen is inadequate to stimulategrowth and development of the endometrium. Therefore, there is inadequate endometrium for uterine bleeding to occur. In contrast, women with oligo-ovulation and anovulationwith abnormal uterine bleeding have constant, noncyclic blood estrogen concentrations that stimulate growth and development of the endometrium. Without the predictable effect of ovulation,progesterone-induced changes do not occur. Initially, these patients have amenorrhea because of the chronic, constant estrogen levels but, eventually, the endometrium outgrows its blood supply and sloughs from the uterus at irregular times and in unpredictable amounts (see Box 35.1). 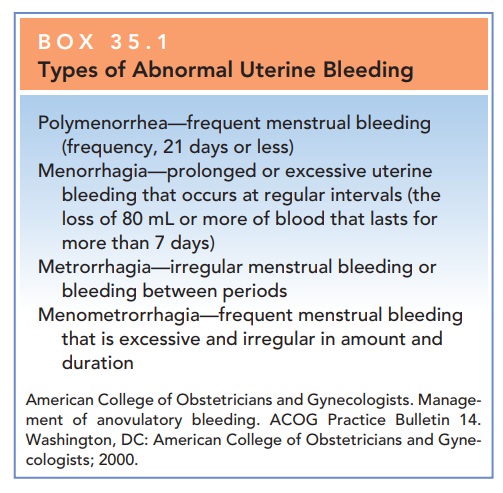 Subtle alterations in the mechanisms of ovulation can produce abnormal cycles, even when ovulation occurs (e.g., the luteal phase defect). In the luteal phase defect, ovulation does occur; however, the corpus luteum of the ovary is not fully developed to secrete adequate quantities of progesterone to support the endometrium for the usual 13 to 14 days and is not adequate to support a pregnancy if conception does occur. The menstrual cycle is shortened, and menstruation occurs earlier than expected. Although this is not classical anovulatory uterine bleeding, it is con-sidered to be in the same category. Another example is mid-cycle spotting, in which patients report bleeding at the time of ovulation. In the absence of demonstrable pathology, this self-limited bleeding can be attributed to the sudden drop in estrogen level that occurs at this time of the cycle.

Diagnosis of abnormal uterine bleeding should be sus-pected when vaginal bleeding is not regular, not pre-dictable, and not associated with premenstrual signs and symptoms that usually accompany ovulatory cycles. These signs and symptoms include breast fullness, abdominal bloating, mood changes, edema, weight gain, and uterine cramps.

Before anovulatory uterine bleeding can be diagnosed, anatomic causes including neoplasia should be excluded.

In a reproductive-aged woman, complications of pregnancy as a cause of irregular vaginal bleeding should be excluded. Other anatomic causes of irregular vaginal bleeding include uterine leiomyomata, inflammation or infection of the gen-ital tract, hyperplasia or carcinoma of the cervix or endo-metrium, cervical and endometrial polyps, and lesions of the vagina (Box 35.4). Pelvic ultrasonography or sonohysterog-raphy may assist in diagnosing these lesions. Women with organic causes for bleeding may have regular ovulatory cycles with superimposed irregular bleeding. 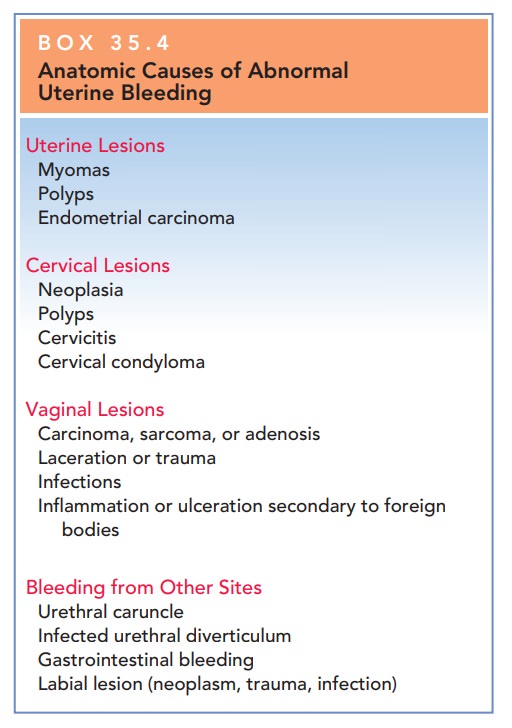 If the diagnosis is uncertain based on history and phys-ical examination alone, a woman may keep a basal body temperature chart for 6 to 8 weeks to look for the shift in the basal temperature that occurs with ovulation. An ovu-lation predictor kit may also be used. Luteal phase pro-gestin may also be measured. In cases of anovulation and abnormal bleeding, an endometrial biopsy may reveal endometrial hyperplasia. Because abnormal uterine bleed-ing results from chronic, unopposed estrogenic stimulation of the endometrium, the endometrium appears prolifera-tive or, with prolonged estrogenic stimulation, hyperplas-tic. Without treatment, these women are at increased risk for endometrial cancer.

Bleeding from Other Sites

The primary goal of treatment of anovulatory uterine bleed-ing is to ensure regular shedding of the endometrium and conse-quent regulation of uterine bleeding. If ovulation is achieved,conversion of the proliferative endometrium into secretory endometrium will result in predictable uterine withdrawal bleeding.

If a patient is being treated for a particularly heavy bleeding episode, once organic pathology has been ruled out, treatment should focus on two issues: (1) control of the acute episode, and (2) prevention of future recurrences. Both high-dose estrogen and progestin therapy as well as combination treatment (oral contraceptive pills, four per day) have been advocated for management of heavy abnor-mal bleeding in the acute phase. Long-term preventive management may include either intermittent progestin treatment or oral contraceptives. Uterine bleeding that does not respond to medical therapy often is managed sur-gically with endometrial ablation or hysterectomy. Before proceeding with endometrial ablation, one must rule out endometrial carcinoma.