The primary ingredient in most user interfaces is the control because a control enables the user to interact with the application.

The primary ingredient in most user interfaces is the control because a control enables the user to interact with the application. As you would expect, JavaFX supplies a rich assortment of controls. The simplest control is the label because it just displays a message, which, in this example, is text. Although quite easy to use, the label is a good way to introduce the techniques needed to begin building a scene graph.

The JavaFX label is an instance of the Label class, which is packaged in javafx.scene.control. Label inherits Labeled and Control, among other classes. The Labeled class defines several features that are common to all labeled elements (that is, those that can contain text), and Control defines features related to all controls.

Label defines three constructors. The one we will use here is Label(String str)

Here, str is the string that is displayed.

Once you have created a label (or any other control), it must be added to the scene’s content, which means adding it to the scene graph. To do this, you will first call getChildren( )

on the root node of the scene graph. It returns a list of the child nodes in the form of an

ObservableList<Node>. ObservableList is packaged in javafx.collections, and it inherits java.util.List, which means that it supports all of the features available to a list as defined by the Collections Framework. Using the returned list of child nodes, you can add the label to the list by calling add( ), passing in a reference to the label.

The following program puts the preceding discussion into action by creating a simple JavaFX application that displays a label:

//Give the stage a title.

//Use a FlowPane for the root node.

//Set the scene on the stage.

//Add the label to the scene graph.

//Show the stage and its scene.

This program produces the following window: 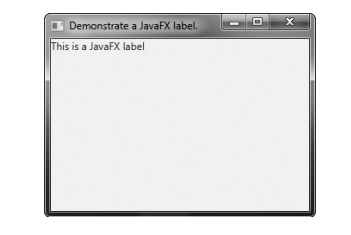 In the program, pay special attention to this line:

It adds the label to the list of children for which rootNode is the parent. Although this line could be separated into its individual pieces if necessary, you will often see it as shown here.

Before moving on, it is useful to point out that ObservableList provides a method called addAll( ) that can be used to add two or more children to the scene graph in a single call. (You will see an example of this shortly.) To remove a control from the scene graph, call remove( ) on the ObservableList. For example,

removes myLabel from the scene.