Since the anesthesiologist has control over the partial pressure of anesthetic delivered to the lung, it can be manipulated to control the anesthetic gas concentra-tion in the brain, hence the level of unconsciousness.

Since the anesthesiologist has control over the partial pressure of anesthetic delivered to the lung, it can be manipulated to control the anesthetic gas concentra-tion in the brain, hence the level of unconsciousness. For this reason, anesthetic dose is usually expressed in terms of the alveolar tension required at equilibrium to produce a defined depth of anesthesia. The dose is de-termined experimentally as the partial pressure needed to eliminate movement in 50% of patients challenged with a standardized skin incision. The tension required is defined as the minimum alveolar concentration (MAC) and is usually expressed as the percentage of inhaled gases that is represented by anesthetic gas at 1 atm.

Various anesthetic agents require widely different partial pressures to produce the same depth of anesthe-sia (Table 25.2). Methoxyflurane, for example, with a MAC of 0.16%, is the most potent agent listed in the table. Only 0.16% of the molecules of inspired gas need be methoxyflurane. N2O is the least potent agent, with a MAC that exceeds 100%. Thus, a level of unconscious-ness needed to eliminate movement is seldom achieved with N2O. 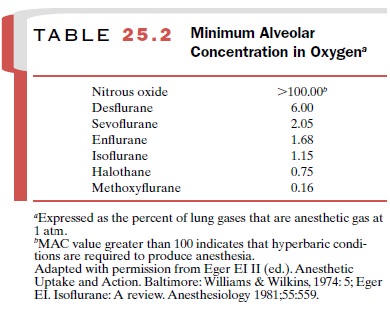 Clinical Application and Interpretation of MAC

MAC is a valuable index for clinical anesthesia, but it is seldom employed without taking other factors into con-sideration. For example, inhibiting movement in only 50% of patients is not acceptable. Consequently, if an inhalational agent were being used alone—that is, with-out the administration of other anesthetics or analgesic drugs—the anesthesiologist would employ a multiple of its MAC value to ensure immobility. MAC is frequently multiplied by a factor of 1.3 to achieve nearly 100% clinical efficacy. On the other hand, useful clinical re-sults may be achieved with doses of anesthetics below MAC levels. For example, mild analgesia and amnesia often occur with doses of inhalational agents that are near 0.5 MAC. In this state, it may even be possible to communicate with patients intraoperatively, while their recall is limited.

Anesthetics are infrequently used without the ad-ministration of other drugs. Many of these drug combi-nations can interact to alter MAC requirements.

For ex-ample, inhalational anesthetics used in combination appear to have an additive effect on the level of uncon-sciousness. Therefore, when a combination of inhala-tional agents is used (e.g., N2O with halothane), MAC values for the individual agents can be reduced appro-priately. In this regard, an acceptable anesthetic mainte-nance tension for N2O and halothane in the inspired air may be 40% and 0.5%, respectively.

The MAC requirement also is reduced by the coad-ministration of other CNS depressants, such as barbitu-rates or opioid analgesics. CNS stimulants, such as am-phetamine, may elevate the partial pressure needed for anesthesia.