For example, say you have an abstract data type called city. This city object will hold the city’s name, and its latitude and longitude. To create a city object, you’d use a function like

To extract the information of a city object, you would use functions like

The following pseudo code will compute the distance between two city objects:

In the above code read distance(), getlat() and getlon() as functions and read lt as latitude and lg longitude. Read := as “assigned as” or “becomes”

Notice that you don’t need to know how these functions were implemented. You are assuming that someone else has defined them for us.

It’s okay if the end user doesn’t know how functions were implemented. However, the functions still have to be defined by someone.

Let us identify the constructors and selectors in the above code

As you already know that Constructors are functions that build the abstract data type. In the above pseudo code the function which creates the object of the city is the constructor.

Here makecity (name, lat, lon) is the constructor which creates the object city. 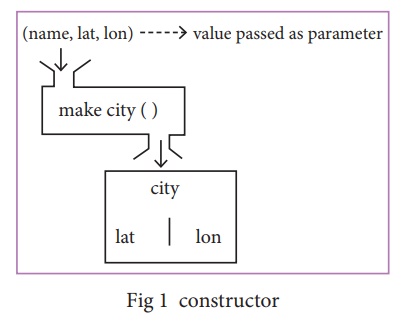 Selectors are nothing but the functions that retrieve information from the data type. Therefore in the above code

Now let us consider one more example to identify the constructor and selector for a slope.Read - - as comments.