For instance, in the game Mastermind, you must keep track of a list of four colors that the player guesses.

As you already know that List allow data abstraction in that you can give a name to a set of memory cells. For instance, in the game Mastermind, you must keep track of a list of four colors that the player guesses. Instead of using four separate variables (color1, color2, color3, and color4) you can use a single variable ‘Predict’, e.g.,

What lists do not allow us to do is name the various parts of a multi- item object. In the case of a Predict, you don't really need to name the parts:

using an index to get to each color suffices.

But in the case of something more complex, like a person, we have a multi-item object where each 'item' is a named thing: the firstName, the lastName, the id, and the email. One could use a list to represent a person:

but such a representation doesn't explicitly specify what each part represents.

For this problem instead of using a list, you can use the structure construct (In OOP languages it's called class construct) to represent multi-part objects where each part is named (given a name). Consider the following pseudo code:

The new data type Person is pictorially represented as 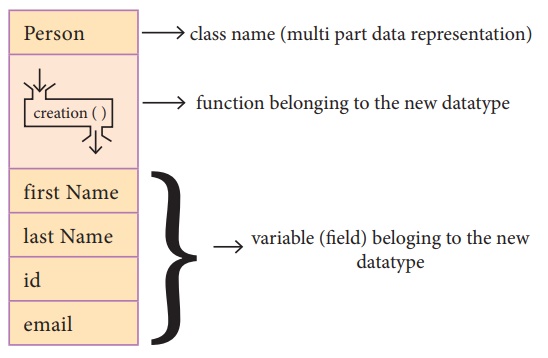 The class (structure) construct defines the form for multi-part objects that represent a person. Its definition adds a new data type, in this case a type named Person. Once defined, we can create new variables (instances) of the type. In this example

So far, you've seen how a class defines a data abstraction by grouping related data items. A class is not just data, it has functions defined within it. We say such functions are subordinate to the class because their job is to do things with the data of the class, e.g., to modify or analyze the data of a Person object.

Therefore we can define a class as bundled data and the functions that work on that data. From All the above example and explanation one can conclude the beauty of data abstraction is that we can treat complex data in a very simple way.