Fibres are twisted together to form a yarn. This process is called as spinning.

Fibres are twisted together to form a yarn. This process is called as spinning. Spinning pro-cess includes all process from cleaning the fibres to opening the bale for twisting of yarn.

The fibres are collected from various bales which are mixed together and finally the yarn is produced. Simultaneously, impuri-ties such as lint, dirt, seeds, leaves and stems are removed by the machines (picker, break-ers and intermediates). After cleaning, the fibres are loosen end and formed like a lap.

Lap is unrolled and drawn into a revolv-ing cylinder, which contains fine hooks or wide bristles. These will pull the fibres in one direction and form them into a thin film. It is known as carding. This film is drawn into a funnel shaped opening. The yarn comes out in the form of round rope like strand called sliver (Figure 4.3). 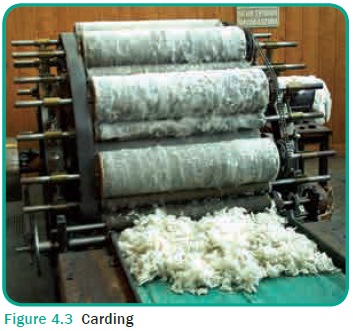 It is a process of straightening the fibre. Short fibres are combed out. The long fibres are again formed into a sliver called comb sliver (Figure 4.4). 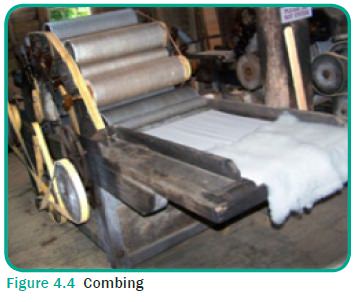 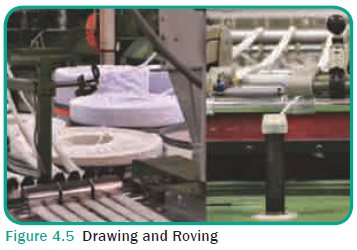 The combined sliver or condensed com-bined sliver is taken to the slubber of a series of machines called Roving frames. A slack twist is given to the yarn sliver (Figure 4.5).

Spinning is the next process after roving. Spinning frame is made up with a number of spools. The roving passes through the ring spinning mechanism, which is drawn again and twisted. Required size and twist of yarn is obtained and wound on bobbins properly. Now bobbin is ready to be used for weaving (Figure 4.6). 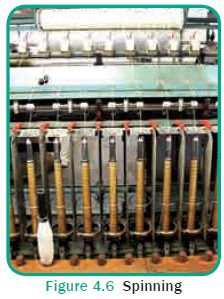