The Universe was formed 15 billion years after the Big Bang explosion. Many galaxies are found in the Universe. Our solar system is a part of the Milky Way Galaxy.

* Many galaxies are found in the Universe.

* Our solar system is a part of the Milky Way Galaxy.

* The Sun is so huge that it accounts for 99.8 percent of the entire mass of the solar system.

* All planets rotate anti-clockwise on their own axes except Venus and Uranus.

* Asteroids are found as a belt between Mars and Jupiter.

* The rotation of the Earth causes day and night.

* The revolution of the Earth causes seasons.

* Summer solstice is the longest day in the Northern Hemisphere.

* The presence of land, water and air along with suitable climate makes life possible on Earth.

1. Galaxy - The cluster of stars

3. Meteors - Space particles left behind by comets or asteroids

5. Satellites - Celestial bodies that move around the planets.

6. Orbit - The path in which the planets move around the Sun.

7. Earth's axis - An imaginary line passing through the centre of the Earth from the North Pole to the South Pole.

8. Rotation - Spinning movement of the planets on their axes.

9. Revolution - The movement of the planets around the Sun in their orbit.

10. Equinox - The day on which day and night are of equal length.

11. Solstice - An occurrence when the Tropic of Cancer and Tropic of Capricorn faces the Sun vertically.

12. Rover - A space exploration vehicle which moves across the surface of a celestial body

13. Orbiter - A spacecraft which orbits a celestial body without landing on its surface.

Travel to the planets and stars and enjoy the adventure! 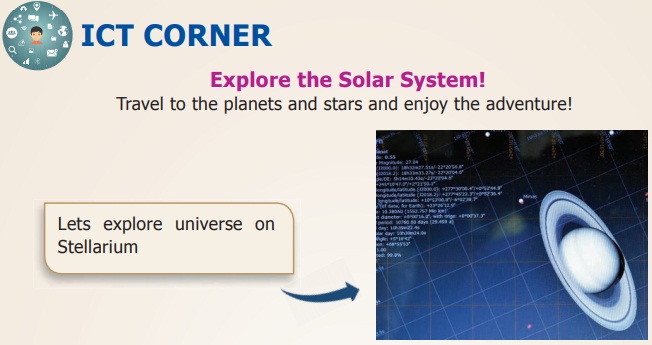 Download and install the ‘Stellarium’ app from the given link. Double click and open the “Stellarium” app

Click the “Location window” or F6. Then select your location using drop down boxes and view the placements of celestial bodies in the sky.

Click the “Date/Time window” or F5. Then set the date and time zone of your location.

Use the “Search window” or F3 and type any name of the solar system to explore them.Select and zoom in on the Earth and play with increase or decrease speed buttons to view its rotation.