Motions of the Earth

Motions of the Earth

Have you noticed the Sun in the morning, afternoon or evening? Is it in the same place throughout the day? No. It is seen in the east in the morning, overhead in the afternoon and in the west in the evening. Have you ever thought of the reason behind it? This is because of the constant moving of the Earth around the Sun. It seems that the Sun is moving, but it is not so. This is similar to what you experience when you are travelling in a bus or train. When you look out of the window, the trees, lamp posts and other objects seem to be moving, but actually it is you who are moving. To understand the motions of the Earth better, you need to be familiar with the shape and inclination of the Earth.

Shape and Inclination of the Earth

The Earth is spherical in shape. It rotates on its axis, which is an imaginary line that runs from the North Pole to the South Pole passing through the centre of the Earth. The Earth’s axis is always tilted or inclined from the vertical by an angle of 23½°. It makes an angle of 66½° with the plane of the Earth’s orbit. 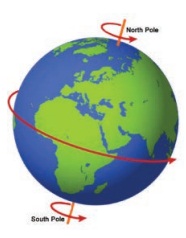 The Midnight Sun is a natural phenomenon that occurs in the summer months in places north of the Arctic Circle or south of the Antarctic Circle, when the Sun remains overhead 24 hours a day.

It is the movement of the Earth around the Sun on its elliptical path. The Earth takes 365 ¼ days for it to complete one revolution. It revolves around the Sun at speed of 30 km per second. 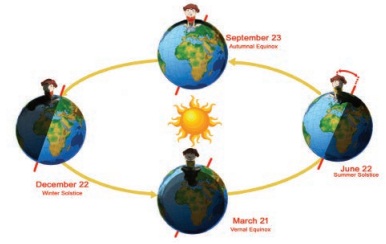 For the sake of convenience, we take it as 365 days and call it a year. The remaining quarter day is added once in every four years in the month of February. That is why February has 29 days once in four years. It is called a Leap Year. The inclination of the Earth on its axis and its revolution around the Sun cause different seasons.

From Sep 23rd to March 21st the southern hemisphere is inclined towards the Sun and the northern hemisphere faces away from the Sun. The changing position of the Earth in its orbit during revolution gives the impression that the Sun is continuously moving north and south of the equator.

HOTS: Priya is 12 years old. How many times she would have revolved around the Sun?

The equator faces the Sun directly on 21 March and 23 September. These two days are called Equinoxes, during which the day and night are equal throughout the Earth.

HOTS: If the Earth is not inclined at 23 1/2º angle, what would happen to the Earth?