The word ‘solar’ is derived from the Roman word ‘sol’, which means ‘Sun God’. The solar system is believed to have formed about 4.5 billion years ago.

The word ‘solar’ is derived from the Roman word ‘sol’, which means ‘Sun God’. The solar system is believed to have formed about 4.5 billion years ago. The solar system is a gravitationally bound system which comprises of the Sun, the eight planets, dwarf planets, satellites, comets, asteroids and meteoroids.

Watch a show in the nearest planetarium. a) Share your experience in the class room. b) Make an album of interesting facts about the solar system. 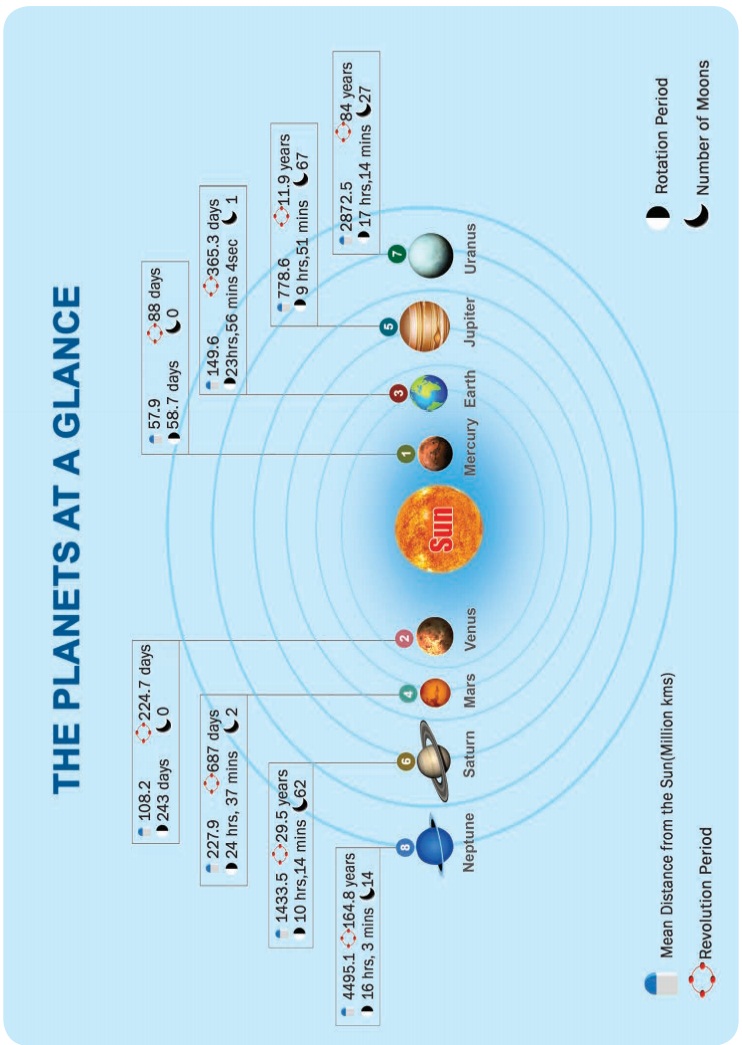 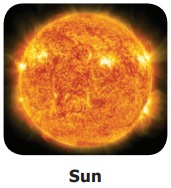 The Sun is a star. It is self-luminous so it gives light on its own. The surface temperature of the Sun is about 6,000° C. It is the source of light and heat energy to the entire solar system. Sunlight takes about 8.3 minutes to reach the Earth.

1.3 million Earths fit inside the Sun. Imagine how big the Sun is.

The word planet means wanderer. There are eight planets in the solar system. They are Mercury, Venus, Earth, Mars, Jupiter, Saturn,

Uranus and Neptune. All the planets rotate anti-clockwise (from west to east) on their own axes except Venus and Uranus. The elliptical path in which the planets move around the Sun is known as orbit. The eight planets revolve in their respective orbits because of the gravitational pull of the Sun. They do not move out of their paths or away from the solar system.

The four planets nearer to the Sun are called Inner or Terrestrial Planets (Mercury, Venus, Earth and Mars). The inner planets are comparatively smaller in size and are composed of rocks. The surface of inner planets has mountains, volcanoes and craters. The last four planets are called as Outer Planets or Jovian Planets (Jupiter, Saturn, Uranus, and Neptune). They are also called Gaseous Giants. An asteroid belt is found between Mars and Jupiter.

Mnemonic to remember the order of planets: My Very Educated Mother Just Showed Us Neptune. 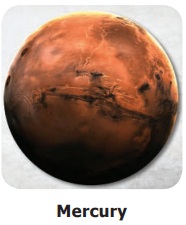 Mercury is the smallest and closest planet to the Sun. It is named after the Roman deity ‘Mercury’, the messenger to the Gods. It is an airless and waterless planet. It does not have an atmosphere and so experiences extremes of temperature. It has no natural satellites. Mercury can be viewed in the morning and evening with naked eye. 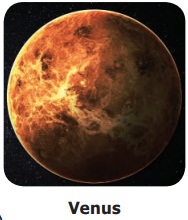 Venus is the second planet from the Sun. It is called Earth’s twin, as it is almost the same size as the Earth. It has the longest rotation period (243 days) among the planets in the Solar system. It rotates in the opposite direction to all other planets except Uranus. It has no natural satellites like Mercury. It is named after the Roman goddess of love and beauty. It is often visible in the mornings and the evenings and so it is frequently called as the Morning Star and the Evening Star. After the Moon, it is the brightest natural object in the night sky.

HOTS: Even though Mercury is the nearest planet to the Sun, Venus is the hottest one. Guess why? 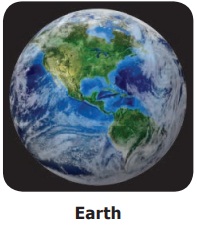 The distance between the Sun and the Earth is about 150 million kilometre. A flight flying at a speed of 800 km per hour from the Earth would take 21 years to reach the Sun.

Mars is the fourth planet from the Sun and the second smallest planet in the solar system, after Mercury. It is named after the Roman God of war. It appears red in colour due to the presence of iron oxide on its surface. So, it is often described as The Red Planet. It has a thin atmosphere. 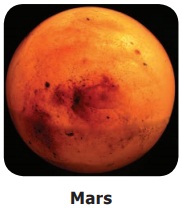 On 24th September, 2014 Mangalyan (Mars Orbiter Mission - MOM), launched by the Indian Space Research Organization (ISRO), reached the orbit of Mars to analyze its atmosphere and topography. ISRO has now become the fourth space agency to reach Mars after the Soviet Space programme, NASA and the European Space Agency.

It also has polar ice caps like the Earth. Mars has two natural satellites namely Phobos and Deimos. Many orbiters and rovers have been launched to explore this planet. 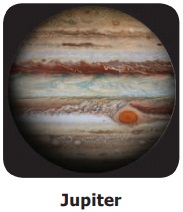 Jupiter is the fifth planet from the Sun and the largest planet in the solar system. It is named after the king of the Roman gods. It is the third brightest object in the night sky, after moon and Venus. It is the fastest spinning planet in the solar system. It is called a gas giant planet. Its atmosphere is made up of mostly Hydrogen and Helium like the Sun. It has the largest number of natural satellites. Io, Europa, Ganymede and Callisto are a few large satellites of Jupiter. 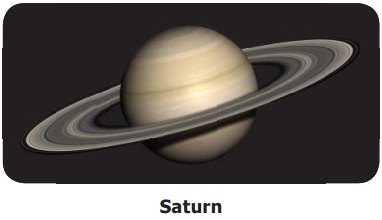 Saturn is the sixth planet from the Sun and the second largest planet in the solar system, after Jupiter. It is named after the Roman god of agriculture. Saturn has many rings around it. These rings are huge and are mostly made up of ice, rocks and dust particles.

Saturn has 62 natural satellites around it. Titan, Saturn’s largest moon, is the only satellite in the solar system that has clouds and dense atmosphere composed of nitrogen and methane. The specific gravity of Saturn is less than that of water.

HOTS: If you could put Saturn in a large enough ocean it would fl oat. Guess why?

Uranus is the seventh planet from the Sun. It was the fi rst t be discovered with a telescope by the astronomer William Herschel in 1781. It appears green due to the presence of methane. It is named after the Greek god of the sky. 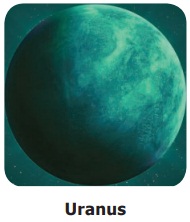 It rotates on its axis from east to west like Venus. Its axis is tilted so much that, it appears to orbit the Sun on its sides like a rolling ball. Uranus has 27 natural satellites, of which Titania is the largest. 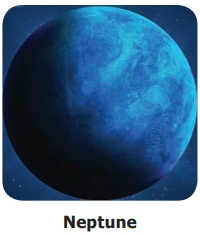 Neptune is the eighth and the farthest planet from the Sun. There are strong winds in this planet. It is named after the Roman god of sea. Neptune has 14 natural satellites, the largest being Triton. Because of its distance from the Sun, Neptune is one of the coldest planets in the solar system. The striking blue and white features of Neptune help to distinguish it from Uranus.

HOTS: Imagine you were on a space craft travelling at the speed of light from Earth, how long would it take to reach the Sun?

Dwarf planets are small celestial bodies found beyond the planet Neptune. They are extremely cold and dark. They are almost spherical in shape, but unlike planets they can share their orbit with other dwarf planets. The five dwarf planets of the solar system are Pluto, Ceres, Eris, Makemake and Haumea. 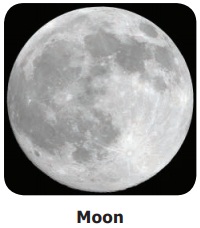 Satellites are celestial objects, which revolve around the planets. The moon is the Earth’s only satellite. It revolves around the Earth once in every 27 days 8 hours. It takes about the same time for it to complete one rotation around its axis. It has no atmosphere. The surface of the moon is characterized by craters created by the impact of meteors. The distance between the moon and the Earth is about 3, 84,400 km. The size of the moon is one-quarter of the Earth. The Moon is the only celestial body where humans have landed.

HOTS: We see only one side of the Moon always. Why?

Asteroids are small solid objects that move around the Sun. They are found as a belt between Mars and Jupiter. They are too small to be called as planets. They are also known as Planetoids or Minor Planets. 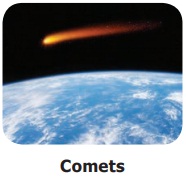 A comet is a celestial object made up of a head and a tail. The head of a comet consists of solid particles held together by ice and the tail is made of gases. Halley’s Comet is the most famous comet which comes close to the Earth every 76 years. It last appeared in 1986 and will next appear in 2061.

A meteor is a stone like or metallic body. When entering into the Earth’s atmosphere, most of them burn. As they often appear as streaks of light in the sky, they are also known as Shooting Stars. Meteors which strike the Earth’s surface are called meteorites.