Who Owns the Water? : Section II

Who Owns the Water?

A pack of wild dogs catching the scent of boar in the wind came to the spot where he had lain. They the circle that was rich with the smell of the animal. They whined and snarled and dug at the smell as if digging the elusive boar himself out of the ground. Finally, realising that there was no dinner to be found there, they departed, their noses and tails high in the air. And in doing so, they left the hole a little bigger and wider than they had found it. 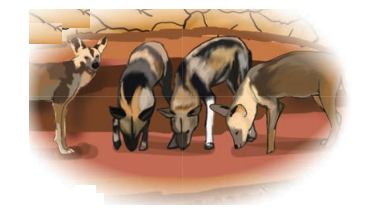 “And then what happened?” you will ask. “Do other animals come along too?” They do indeed, my child. I told you the hole had a story to tell!

Not long after, the rains came. It poured and poured and only those of us who have seen the monsoons will know what that means. It rained without stopping for three days and three nights and the dry earth soaked up the moisture, as a hungry puppy laps up milk.

The whole earth smelled wet and fresh and even the normally serious–looking people in the village went around with smiles on their faces. The hole in the ground collected the water that fell and around its edges the grass grew a brighter green. Soon buffaloes discovered the grassy spot and as buffaloes want to do, they wallowed in the puddly water, turning the hole into a muddy pit.

I was not there to see, but I am told that many afternoons did the buffaloes gather and thus with a multitude of hooves trampling the soil, the pit that was once a tiny depression, widened and grew and became a little watering hole.

“And they all lived happily ever after!” you will say in glee. But that rarely happens in real tales, my dear. There is more to go, so you will have to wait awhile.

sniffed - to breathe in air in a noisy way

snarled - made a deep angry noise

whined - made a high pitched cry

Complete the sentences given below with words/ phrases.

The wild dogs came to the spot to catch the wild boar.

The rains came and poured for three days and three nights.

The hole in the ground was filled with rain water.

The  buffalo wallowed in the muddy water in the hole.

The hole became wide and became a watering hole.