Who Owns the Water? : Section III

Who Owns the Water?

A poor farmer tilled the land near the once small depression. His life was hard and the rains were often cruel. In summer months he had to travel far to get water for his thirsty crops and even then his harvest was meagre. One day, not long after the last of the season’s rains, he straightened up from his back- breaking work and looked over the land that was soon becoming brown again. And on the horizon, just beyond his pitiful plot, his eyes came to rest on a patch of green. Going closer to investigate, the farmer fell to the ground with gratitude at the sight of the verdant bowl. Here was water to be had, and so close to his holding! Forgetting all tiredness, he raced home and brought out his pickaxe and spade and soon the buffaloes’ picnic spot was a perfectly decent little pond. 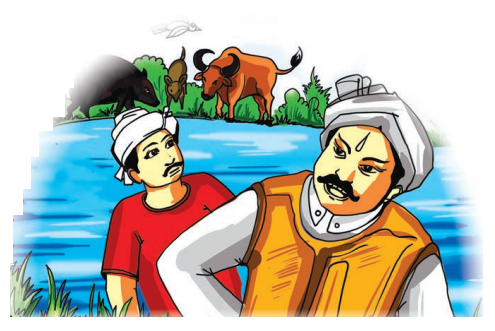 “Is this story going to end with a moral?” you ask me suspiciously. No, little one, but there is something to learn from everything we see and hear; so hush, while I come to end of the tale.

So happy was the farmer that he told his wife who summoned the village priest to bless their fortune. I do not need to tell you how soon news travels in a little village and so it was quite a crowd that gathered by the side of the pond to see the priest furrow his brow and chant serious something that nobody ever understands.

Just then, the richest farmer in the village pushed his way to the front of the group. He was always upset when things took place that he was not invited to. Looking at the farmer and the placid pond, a slow smile of contentment creased his face. “I see you have come to bless my pond,” he said to the priest. “Your pond?” stuttered the poor farmer. “ Why yes,” smoothly oiled the rich one. “Your patch, surely, ends just there. This land is all mine.” And saying this he crossed his arms and planted his feet on the ground. As the rich farmer and the poor one looked at each other, the buffaloes, the dogs, the boar and yes, even the little bird stopped by to see. They all stood around the little jewel of blue and in every mind, small and big, came a similar thought: “Surely, I had something to do with this!”

And so I end with a question to you, my beloved friend.

“ Who owns the water?” Not a moral, just a thought – a germ of an idea to dig and make bigger.

wallowed - to lie and roll in mud

multitude  -  a large number of people

tilled - prepared the land for crops

Answer the following questions in one or two sentences.

1. Why did the farmer have to travel far?

The farmer had to travel far to get water for his thirsty crops.

2. What sight made the farmer thankful?

The sight of the verdant bowl made the farmer thankful.

3. Name the tools the farmer brought out. What did he do with them?

The farmer brought out his pickaxe and spade. He dug the land to transport water from the pond to his field.

4. Why did the crowd gather by the side of the pond?

The crowd gathered by the side of the pond to see it. Each of them thought that he had something to do with that.

5. When did the richest farmer get upset? Why?

The richest farmer got upset when he was not invited to when things took place. Being rich he wanted to be a prominent man in everything.