Where do Human Rights come from?

A set of basic rights and freedoms has deep roots in European and American countries.

Where do Human Rights come from?

A set of basic rights and freedoms has deep roots in European and American countries.

The Magna Carta of 1215(England) – gave people new rights and made the king subject to the law.

The Petition of Right 1628(England) – set out the rights of the people.

The Habeas Corpus Act of 1679(England) – an act for the better securing liberty of the subject.

The English Bill of Rights of 1689 – set out certain basic civil rights.

The French Declaration on the Rights of Man and Citizen 1789 – a document of France,

stating that all citizens are equal under the law.

The US Constitution and Bill of Rights 1791 - safeguards the rights of the citizens.

b. The Birth of United Nations

The idea of human rights emerged stronger after the Second World War. This War led to unimaginable violation of human rights. During the times of war, human lives lost its value and those affected by war had to struggle till the end of their life. Atrocities during the Second World War made clear that previous efforts to protect individual rights from government violations were inadequate. The rights of man were prevented or eliminated in several parts of the world due to several factors. It is proved that the government of some countries alone could not protect human rights. People wanted to ensure that never again would anyone be unjustly denied life, freedom, food, shelter, and nationality. These voices played a critical role in the San Francisco meeting in which the United Nations Charter was drafted in 1945. At this juncture, an International body, the United Nations Organisation (UNO) which was established on 24th October 1945 took up the issue. Human Rights is an important theme in all UN policies and programmes in the areas of peace and security, development, humanitarian assistance and economic and social affairs.

One of the greatest achievements of United Nations is the creation of human rights law. To advance this goal, the UN established a Commission on Human Rights. The Commission guided by Eleanor Roosevelt’s (wife of former US president Franklin D Roosevelt) forceful leadership captured the world’s attention. Finally, the Universal Declaration of Human Rights (UDHR) was adopted by the UN General Assembly in 1948. It is a milestone document in the history of Human rights. The Declaration was proclaimed by the UN General Assembly in Paris, France on 10th December 1948(General Assembly resolution 217A). In remembrance of every year 10th December is observed as the Human Rights Day and its regular observance commenced from 1950.

All men are born free and all are equal in status and rights. They are endowed with intelligence and conscience and obliged to promote the spirit of common brotherhood amongst all men.

It is also known as modern International Magna Carta of Human Rights. Its principles have been incorporated into the Constitutions of most of the (more than 185) nations. UDHR has been translated into more than 500 languages. It is the most translated document in the world. 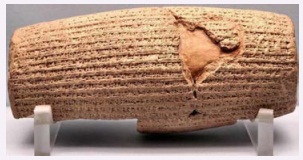 Cyrus the Great, the first king of ancient Persia, freed the slaves and declared that all people had the right to choose their own religion and established racial equality. These and other decrees were recorded on a baked-clay cylinder in the Akkadian language in cuneiform script. It is translated into all six official languages of the United Nations and its provisions parallel the first four Articles of the Universal Declaration of Human Rights.