What is the WHO ladder?

The World Health Organization (WHO) has devised a protocol for treating pain utilizing a tiered approach.

What is the WHO ladder?

The World Health Organization (WHO) has devised a protocol for treating pain utilizing a tiered approach. This protocol allows for the use of less potent medications initially (first tier), increasingly more potent medications (next tiers) being added in a stepwise approach until the patient is comfortable. The WHO states that about 85% of cancer patients can be kept comfortable using this protocol.

First-tier medications include non-opioid analgesics such as nonsteroidal anti-inflammatory drugs (NSAIDs), tricyclic antidepressants (TCAs), and anticonvulsants. Second-tier medications include “weak opioids,” which have ceiling dosages due to their combination with acetaminophen or NSAIDs. Third-tier analgesics in the WHO ladder include all sole opioid preparations, both short-acting and extended release. Despite the addition of large doses of opioids in the third tier, the non-opioid medications from tier 1 should be continued. A good knowledge of opioid equipotency conversions is necessary to be able to change from one opioid to another. 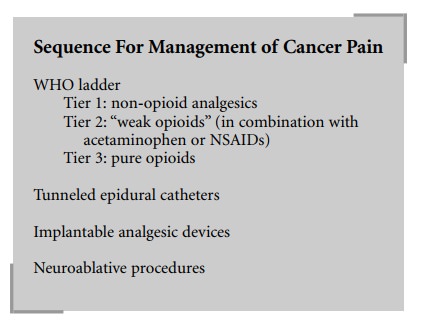