Home | | Automation Production System and Computer Integrated Manuacturing | What is an (Flexible Manufacturing Systems)FMS and Types of FMS
Posted On :  17.11.2016 06:14 pm

What is an (Flexible Manufacturing Systems)FMS and Types of FMS

A flexible manufacturing system (FMS) is a highly automated of machine cell. consisting of a group of processing workstations (usually CNC machine tools), interconnected by an automated material handling and storage system, and controlled by a distributed computer system.

WHAT IS AN FMS?

A flexible manufacturing system (FMS) is a highly automated OT machine cell. consisting of a group of processing workstations (usually CNC machine tools), interconnected by an automated material handling and storage system, and controlled by a distributed computer system. The reason the FMS is called flexible is that it is capable of processing a variety of different part styles simultaneously at the various orkstations, and the mix of part styles and quantities of production can be adjusted in response to changing demand patterns. The FMS is most suited for the mid-variety,  mid-volume production range (refer to Figure 1.7).

The initials FMS are sometimes used to denote the term flexible machining system. The machining process is presently the largest application area for FMS technology. However, it seems appropriate to interpret FMS in its broader meaning, allowing for a wide range of possible applications beyond machining.

An FMS relies on the principles of group technology. No manufacturing system can be completely flexible. There are limits to the range of parts or products that can be made in an FMS. Accordingly, an FMS is designed to produce parts (or products) within a defined range of styles. sizes. and processes. In other words. an FMS is capable of producing a single part family or a limited range of part families,

What  Makes It Flexible?

The issue of manufacturing system flexibility was discussed previously in Section 13.2.4. In that discussion, we identified three capabilities that a manufacturing system must possess to be flexible: (I) the ability to identify and distinguish among the different part or product styles processed by the system, (2) quick changeover of operating instructions, and (1) quick changeover of physical setup. Flexibility is an attribute that applies to both manual and automated systems. In manual systems, the human workers are often the enablers of the system's flexibility.

To develop the concept of flexibility in an automated manufacturing system, consider a machine cell consisting of two CNC machine tools that are loaded and unloaded by an industrial robot from a parts carousel, perhaps in the arrangement depicted in Figure 16.1. The cell operates unattended for extended periods of time. Periodically, a worker must unload completed parts from the carousel and replace them with new work parts. By any definition, this is an automated manufacturing cell, but is it a flexible manufacturing cell? One might argue that yes, it is flexible, since the cell consists of CNC machine tools, and CNC machines are flexible because they can be programmed to machine different 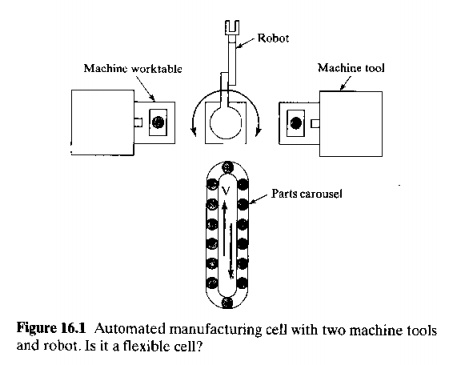 part configurations. However, if the cell only operates in a batch mode, in which the same part style is produced by both machines in lots of several dozen (or several hundred) units, then this does not qualify as flexible manufacturing,

Schedule change test. Can the system readily accept changes in production schedule, and changes in either part mix or production quantities?

Error recovery test. Can the system recover gracefully from equipment malfunctions and breakdowns, so that production is not completely disrupted'!

If the answer to all of these questions is "yes" for a given manufacturing system, then the system can be considered flexible. The most important criteria are (1) and (2). Criteria (3) and (4) are softer and can be implemented at various levels. In fact, introduction of new part designs is not a consideration in some FMSs; such systems are designed to produce a part family whose member are all known in advance.

if the automated system does not meet at least the first three tests, it should not be classified as an FMS. Getting back to our illustration, the robotic work cell satisfies the criteria if it: (1) can machine different part configurations in a mix rather than in batches;

(2) permits changes in production schedule and part mix; (3) is capable of continuing to operate even though one machine experiences a breakdown (e.g., while repairs are being made on the broken machine, its work is temporarily reassigned to the other machine); and (4) as new part designs arc developed, NC part programs are written offline and then downloaded to the system for execution. This fourth capability requires that the new part is within the part family intended for the FMS, so that the tooling used by the CNC machines as well as the end effector of the robot are suited to the new part design.

Over the years, researchers and practitioners have attempted to define manufacturing flexibility. These attempts are documented in several of our references,

and. The result of these efforts IS the conclusion that flexibility in manufacturing has multiple dimensions; there are various types of flexibility. Table 16.1 defines these flexibility types and lists the kinds of factors on which they depend.

Having considered the issue of flexibility and the different types of flexibility that are exhibited by manufacturing systems, let us now. consider the various types of FMSs. Each FMS is designed for a specific application, that is, a specific family of parts and processes Therefore, each FMS is custom engineered; each FMS is unique. Given these circumstances, one would expect to find a great variety of system designs to satisfy a wide variety of application requirements. 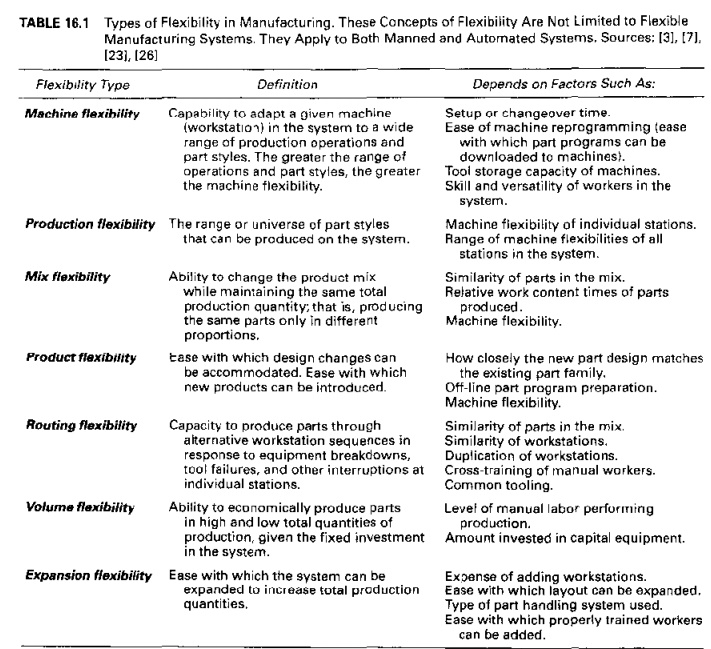 Number of Machines. Flexible manufacturing systems can be distinguished according to the number of machines in the system. The following are typical categories:

single machine  cell (type  I A in our classification  scheme  of Section  ]3.2)

A single machine cell (SMC) consists of one CNC machining center combined with a parts storage system for unattended operation (Section 14.2), as in Figure 16.2. Completed parts are periodically unloaded from the parts storage unit, and raw work-parts are loaded into it. The cell can be designed to operate in either a batch mode or a flexible mode or in combinations of the two. When operated in a batch mode, the machine processes parts of a single style in specified lot sizes and is then changed over to process a batch of the next part s.tyle. When operated in a flexible mode, the system satisfies three of the four f1exibili1y tests (Section 16.1.1). It is capable of (1) processing different part styles, (2) responding to changes in production schedule, and (4) accepting new part introductions.

Criterion (3),error recovery, cannot be satisfied because if the single machine breaks down, production stops.

connected mechanically by a common part handling system and electronically by a distributed computer system. Thus, an important distinction between an FMS and an FMC is 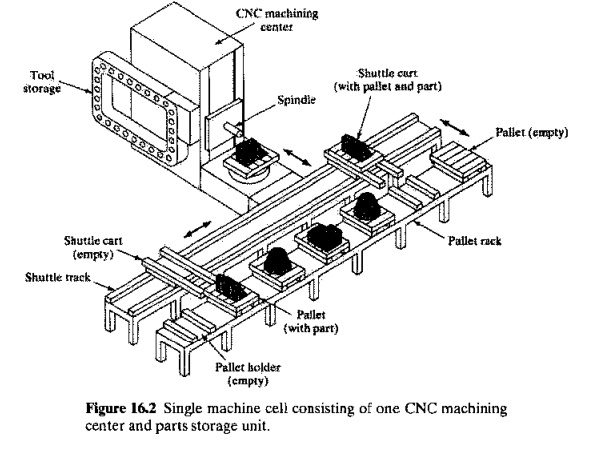 the number of machines: an FMC has two or three machines, while an FMS has four or more." A second difference is that the FMS generally includes non-processing workstations that support production but do not directly participate in it. These other stations include part/pallet washing stations, coordinate measuring machines, and so on. A third difference is that the computer control system of an FMS is generally larger and more sophisticated, often including functions not always found in a cell, such as diagnostics and tool monitoring. These additional functions are needed more in an FMS than in an FMC because the FMS is more complex.

Some of the distinguishing characteristics of the three categories of flexible manufacturing cells and systems are summarized in Figure 16.4. Table 16.3 compares the three systems in terms of the four flexibility tests.

Level of Flexibility. Another classification of FMS is according to the level of flexibility designed into the system. This method of classification can be applied to systems with any number of workstations, but its application seems most common with FMCs and FMSs.1\vo categories are distinguished here:

A dedicated FMS is designed to produce a limited variety of part styles, and the complete universe of parts to be made on the system is known in advance. The term special manufacturing system has also been used in reference to this FMS type (c.g., [24». The part family is likely to be based on product commonality rather than geometric similarity. The product design is considered stable, and so the system can be designed with a certain amount of process specialization to make the operations more efficient. Instead of using general-purpose machines, the machines can be designed for the specific processes required to make the limited part family, thus increasing the production rate of the system. In some instances, the machine sequence may be identical or nearly identical for all parts processed and so a transfer line may be appropriate. in which the workstations possess the necessary flexibility to process the different parts in the mix. Indeed, the term flexible transfer lint is sometimes used for this case.

A random-order EMS is more appropriate when the part family is large, there are substantial variations in part configurations, there will be new part designs introduced into the system and engineering changes in parts currently produced, and the production schedule is subject to change from day-to-day, To accommodate these variations, the random-order FMS must be more flexible than the dedicated FMS. It is equipped with general-purpose machines to deal with the variations in product and is capable of processing parts in various sequences (random-order). A more sophisticated computer control system is required for this FMS type.

We see in these two system types the tradeoff between flexibility and productivity. The dedicated FMS is less flexible but more capable of higher production rates. The random-order FMS is more flexible but at the price of lower production rates. A comparison of the features of these two FMS types is presented in Figure 16.5. Table 16.4 presents a comparison of the dedicated FMS and random-order FMS in terms of the four flexibility tests