What are the most common intraoperative coagulopathies?

The common intraoperative coagulopathies are listed in Table 50.2.

What are the most common intraoperative coagulopathies? 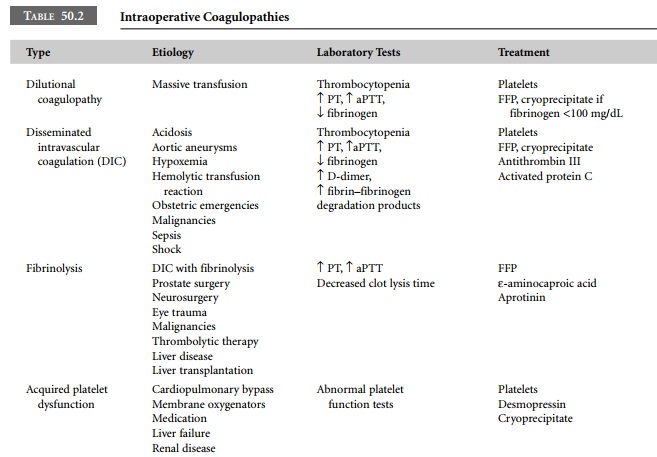 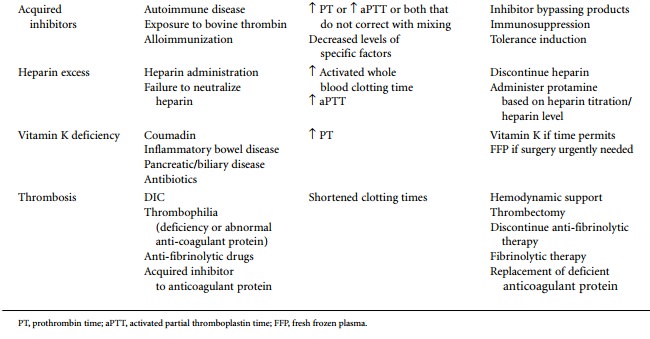 Dilutional coagulopathy secondary to massive transfu-sion is the most common intraoperative coagulopathy. Massive transfusion may be defined as the transfusion of greater than 10 units of blood, replacement of 50% of the circulating blood volume in 3 hours, or replacement of one blood volume in 24 hours. During surgery, maintenance of blood volume by appropriate administration of crystal-loids and colloids is essential. Red blood cells (RBCs) are transfused as needed to provide oxygen carrying capacity. Whole blood is virtually unavailable because all donor units collected are used for component preparation. As a consequence, packed RBCs or RBCs in adenine/saline pre-servative solution are the primary products used. RBC products contain no viable platelets. Most platelets are removed from the unit during the preparation of platelet concentrate; the rest are inactivated after storage at 1–6°C for 24 hours. At a minimum, 48–72 hours is needed to complete the required infectious disease testing. Thus, platelets in RBC products and platelets in whole blood that may have been collected for a special procedure are invari-ably inactivated. RBC products also contain little plasma. Conventional packed RBCs contain a small amount of residual plasma. However, most RBCs are prepared in adenine/saline preservative solution to extend the shelf life to 42 days. After centrifugation of a unit of whole blood, as much plasma as possible is removed and replaced with 100–110 mL of the preservative solution.

The hematocrit of adenine/saline RBCs is 55–65%, whereas the hematocrit of conventional packed cells is 70–80%. The transfusion of crystalloid and/or colloid solutions with RBCs creates a dilutional coagulopathy manifested by thrombocytopenia and prolongation of coagulation tests. Abnormal bleeding does not invariably occur when these laboratory abnormalities are present. During massive transfusion, hemostasis should be rou-tinely monitored with point-of-care testing. When exces-sive bleeding occurs, the results of coagulation tests should be used to guide replacement therapy. Excessive microvas-cular bleeding appears to be more common with platelet counts less than 50,000/μL and fibrinogen levels below mg/dL.

DIC is a syndrome characterized by primary intravas-cular activation of the coagulation system with secondary activation of fibrinolytic pathways. Although the mecha-nism of activation may vary, proinflammatory cytokines (interleukin-6, interleukin-1β, and tumor necrosis factor-α) and thrombin generation through the tissue factor/VIIa extrinsic factor pathway are major factors in the develop-ment of DIC. Activation of the coagulation cascade leads to the formation of intravascular thrombi and consumption of platelets, clotting factors, and anticoagulant proteins (protein C, protein S, antithrombin III).

Although there is secondary activation of the fibrinolytic pathway, there may be impaired fibrin degradation because circulating levels of plasminogen activator inhibitor-type 1 are increased. In the intraoperative setting, bleeding may be the presenting symptom because of consumption of platelets and coagulation proteins. However, occlusion of small and medium-sized vessels may cause multisystem organ dys-function and failure. Laboratory studies demonstrate a prolonged PT, aPTT, decreased fibrinogen levels, increased D-dimer, and increased fibrin-fibrinogen degradation products. Antithrombin III and protein C levels are also decreased.

DIC may complicate many clinical conditions. It may be clinically silent and compensated or it may be uncompen-sated and flagrant. DIC occurs in sepsis, aortic aneurysms, massive trauma, placental abruption, eclampsia, amniotic fluid embolism, fetal death in utero, and with brain injuries. Patients with solid tumors and hematologic malignancies may also have DIC. In the patient with normal hemostasis prior to surgery, shock, acidosis, hypoxia, or endotoxemia may trigger DIC. The entry of brain tissue, fat or tumor into the circulation may also activate coagulation.

The treatment of DIC is controversial, particularly in the surgical setting. There is general agreement that control of the underlying disease is essential. When hemorrhagic symptoms predominate, transfusion of platelets, plasma, and cryoprecipitate is indicated. Since levels of anticoagu-lant proteins are also low, the use of antithrombin III (ATIII) and activated protein C should be considered. ATIII concentrates have been used in congenital antithrombin deficiency, in obstetric emergencies, to treat heparin resistance, and in DIC associated with sepsis. The results in sepsis have been variable but many obstetricians believe that ATIII is invaluable in certain clinical settings. Unfortunately, ATIII concentrate has been in very short supply recently because of decreased production and FFP is the only alternative product.

Recombinant activated protein C was recently licensed in the United States to treat severe sepsis. In clinical trials it decreased levels of D-dimer and interleukin-6 and reduced mortality. Activated protein C has also been used to man-age DIC in obstetric patients in Japan. Post-marketing studies may identify other clinical conditions with DIC in which use of this product decreases morbidity and reduces mortality. Clinical trials are also under way to evaluate tissue factor pathway inhibitor in sepsis.

Fibrinolysis occurs when massive activation of plas-minogen overwhelms the fibrinolytic inhibitor system. Urologic surgery, pulmonary and cardiovascular surgery, brain trauma, and eye injury may cause such activation. Epsilon-aminocaproic acid and aprotinin are effective antifibrinolytic drugs in these circumstances. Fibrinolysis may also be iatrogenic resulting from thrombolytic therapy. Secondary fibrinolysis in DIC may contribute to intraoperative bleeding.

Acquired platelet dysfunction is relatively common. Usually it is caused by medications that inhibit platelet func-tion and that are not discontinued prior to surgery. Many of these drugs are medications used in cardiovascular disease. Abciximab, tirofiban, epitifibatide, and clopidogrel are prominent because of the frequency with which they are used. Also, because of their frequent exposure to heparin, patients with cardiovascular disease may also have heparin-induced thrombocytopenia and associated platelet dys-function. Many other medications can cause platelet dysfunction. Volume expanders such as dextran and hydroxy-ethyl starch and high doses of penicillin and cephalosporins may contribute to surgical bleeding. Finally, in cardiac sur-gery, bypass produces defective platelet function, probably related to platelet activation and fragmentation.

Acquired inhibitors are infrequent but dramatic causes of intraoperative coagulopathy. Most inhibitors occur in severe hemophilia where antibody develops following exposure to factor VIII or IX when concentrate is used for prophylaxis or therapy. These patients are invariably identified in the pre-operative screening process and appropriate plans for treat-ment and monitoring planned well in advance. The development of recombinant activated factor VIIa to treat such patients has reduced mortality and morbidity in this group of patients. Acquired inhibitors may develop in indi-viduals with no history of abnormal bleeding. These inhibitors are autoantibodies to autologous coagulation pro-teins. The most commonly reported acquired inhibitors are to factor VIII, although inhibitors to other clotting factors have been reported. These inhibitors may occur in preg-nancy, postpartum, in autoimmune diseases such as lupus, with solid tumors, hematologic malignancies, and in the eld-erly. Recently there has been an alarming increase in reports of acquired inhibitors to factor V in patients exposed to bovine thrombin preparations when “homemade” fibrin sealants were made from cryoprecipitate. Most of these patients have had neurosurgery or cardiovascular surgery, but fibrin sealant is useful in many procedures. The com-mercially available fibrin sealant (Tisseel) does not use bovine thrombin and is an alternative and preferred product.

Screening coagulation tests are abnormal with acquired inhibitors. However, when a patient urgently requires surgery and there is no history of abnormal bleeding, they are sometimes taken to surgery under the assumption that FFP will correct the abnormality.

If the inhibitor is identified prior to surgery the proce-dure should be postponed if possible. Some inhibitors spontaneously disappear, while others respond to immunosuppressive treatment. If surgery is urgently needed, plasma exchange or immunoadsorption to reduce the titer of the inhibitor in combination with replacement therapy and/or factor bypassing products such as rVIIa and FEIBA may be helpful.