Home | | Clinical Cases in Anesthesia | What are the anesthetic implications of psychotropic agents used in patients receiving ECT?
Posted On :  03.09.2017 07:05 pm

What are the anesthetic implications of psychotropic agents used in patients receiving ECT?

What are the anesthetic implications of psychotropic agents used in patients receiving ECT? 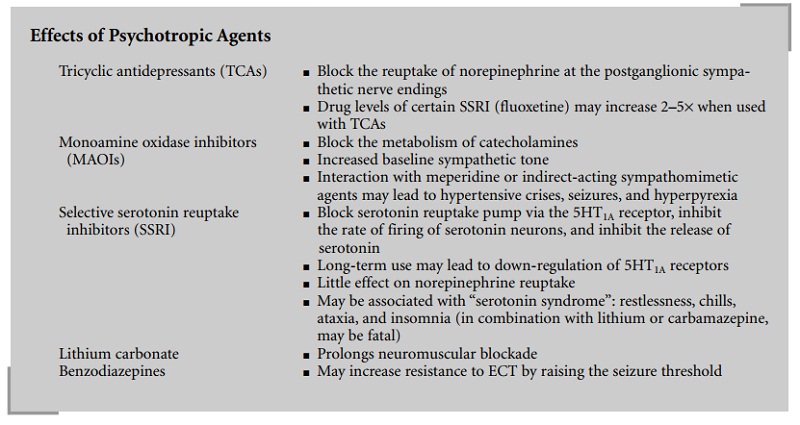 Several categories of drugs must be used with caution with TCAs. These include: opioids (such as meperidine), antihypertensives, potent volatile agents, and anticholiner-gics. TCAs bind to albumin and therefore increase plasma levels of medications that bind to albumin, such as thiopental, diazepam, phenytoin, and propranolol.

MAOIs (phenelzine, tranylcypromine) block the meta-bolism of catecholamines, increasing baseline sympathetic tone as well. The interaction between MAOIs and meperi-dine or indirect-acting sympathomimetic agents has been shown to lead to hypertensive crises, seizures, and hyper-pyrexia.

SSRIs (citalopram, fluoxetine, fluvoxamine, paroxetine, and sertraline) may be associated with “serotonin syn-drome”, which is characterized by restlessness, chills, ataxia, and insomnia. Fatal serotonin syndrome may develop when an SSRI is combined with lithium or carbamazepine. Certain SSRIs are inhibitors of the hepatic cytochrome P-450 system and may increase drug levels of TCAs and β-blockers to toxic levels. Extreme caution must be taken when prescribing SSRIs (particularly fluoxetine) to patients on these medications.

Lithium carbonate may prolong the neuromuscular blockade achieved by muscle relaxants. Patients taking long-acting benzodiazepines may be resistant to ECT. These patients may require higher energy levels in order to overcome their seizure threshold.