Democracy is a system of government in which the supreme power is vested in the people of a country and people elect their representatives either directly or indirectly through fair and free elections, which are usually held periodically.

·        Democracy is a form of government that allows people to choose their rulers.

·        Only leaders elected by people should rule the country.

Democracy is a system of government in which the supreme power is vested in the people of a country and people elect their representatives either directly or indirectly through fair and free elections, which are usually held periodically. 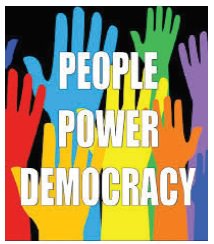 According to Mahatma Gandhi, “True democracy cannot be worked by twenty men sitting at the centre. It has to be worked from below by the people of every village.” 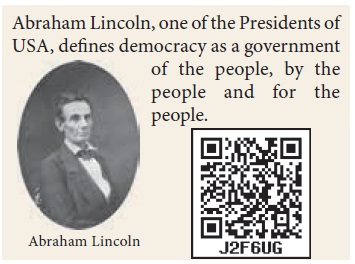 3. Universal adult franchise with each vote having equal value.

Democracy began 2,500 years ago in  some  of  the  city-states  of  ancient Greece. It is important to know that democratic institutions existed in India as early as the Vedic period. Chanakya’s Arthashastra tells us that in ancient India, an autonomous village community was the basic unit of the local government. In ancient Tamil Nadu, Kudavolai system was a very notable and unique feature of the village administration of the Cholas. The evolution towards a democracy is represented by the following values: freedom, equality, liberty, accountability, transparency and trust. 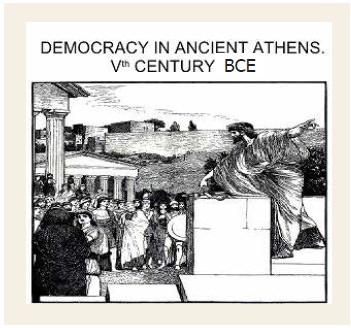 There are two types of democracies:

The types of democracy refers to the kind of government or social structures which allow people to participate equally.

When the people themselves directly express their will on public affairs, the type of government is called pure or direct democracy.

When the people express their will on public affairs, through their elected representatives, the type of government is called indirect or representative democracy.

Example: The prevailing system of democracy in India, USA and UK 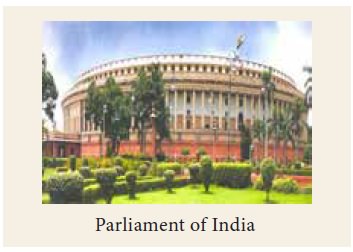 India is the largest democratic country in the world. Democracy in India works on five basic principles. These are sovereign, socialist, secular, democratic, republic.

Every person who is a citizen of India and who is not less than 18 years of age can exercise their right to vote in India, based on universal adult suffrage. There is no discrimination based on a person’s caste, creed, religion, region, gender and education when it comes to providing the right to vote.

8. Merits and Demerits of Democracy

·        Sense of responsibility among common people

·        Sense of cooperation and fraternal feeling

·        Indirect or representative nature of democracy

·        Instability in governance due to fractured mandate

India has a quasi-federal government, with elected representatives at the federal, state and local levels. The general elections are conducted by the Election Commission of India. At the national level, the President of India, appoints the Prime Minister, who enjoys majority in the Lok Sabha, the lower house of the Parliament of India.

All members of the Lok Sabha are directly elected through general elections, which take place once in every five years, in normal circumstances.

Two Anglo Indian members can be nominated by the President of India to the Lok Sabha.

Members of the Rajya Sabha, the Upper House of the Indian Parliament, are elected by an electoral college consisting of elected members of the legislative assemblies of the states and the Union Territories of India. The President of India nominates 12 members for their contributions to art, literature, science and social services.

10. The First Elections in Democratic India

General elections to the first Lok Sabha since independence Were held in India between 25 October 1951 and 21 February 1952. The Indian National Congress emerged victorious by winning 364 of the 489 seats. Jawaharlal Nehru became the first democratically elected Prime Minister of the country.

Democracy is the dominant form of government in the contemporary world. It has not faced a serious challenge or a rival so far. In the last hundred years, there has been an expansion of democracy all over the world. The various aspects of democracy and its challenges are:

12. Conditions for the Success of Democracy in India

·        Empowerment of the poor and illiterates to enjoy the goodness of democracy.

·        Willingness among the elected people not to misuse their powerful position and public wealth.

·        Eradication of social evils and dangers from which democracy suffers.

·        An impartial and efficient press to form public opinion.

·        Feeling of tolerance and communal harmony among the people.

·        Awareness among the people of the fundamental rights that they are entitled to enjoy.

·        Conscious check and vigilance on the working of the elected representatives.

Though democracy in India has been appreciated worldwide for its working, there is still a lot of scope for improvement. The above-mentioned steps must be taken to ensure smooth functioning of democracy in the country.

Indian democracy can be successful and vibrant only when its citizens imbibe and reflect in their behavior the basic democratic values like equality, freedom, social justice, accountability and respect for all. Their mindset, thinking and behavior are expected to be in tune with the essential conditions of democracy. They have to appreciate the opportunities for their desired roles like participation, making the system accountable, fulfilling obligations, and playing proactive roles to actualize the goals of democracy.

·        Government is a group of people who govern a community or unit.

·        Monarchy is a system of government in which one person reigns supreme, usually a king or queen.

·        Types of democracy refer to kind of government or social structures which allow people to participate equally, either directly or indirectly.

·        When the people themselves directly express their will on public affairs, the type of government is called pure or direct democracy.

·        Based on universal adult suffrage, every Indian citizen, above 18 years of age, can exercise the right to vote in India.