What Is Analytical Chemistry?

What Is Analytical Chemistry?

Unfortunately, this description ignores the unique perspective that analytical chemists bring to the study of chemistry. The craft of analytical chemistry is not in performing a routine analysis on a routine sample (which is more appropriately called chemical analysis), but in improving established methods, extending existing methods to new types of samples, and developing new methods for measuring chemical phenomena.

Here’s one example of this distinction between analytical chemistry and chemi- cal analysis. Mining engineers evaluate the economic feasibility of extracting an ore by comparing the cost of removing the ore with the value of its contents. To esti- mate its value they analyze a sample of the ore. The challenge of developing and val- idating the method providing this information is the analytical chemist’s responsi- bility. Once developed, the routine, daily application of the method becomes the job of the chemical analyst.

Another distinction between analytical chemistry and chemical analysis is that analytical chemists work to improve established methods. For example, sev- eral factors complicate the quantitative analysis of Ni2+ in ores, including the presence of a complex heterogeneous mixture of silicates and oxides, the low con- centration of Ni2+ in ores, and the presence of other metals that may interfere in the analysis. Figure 1.1 is a schematic outline of one standard method in use dur- ing the late nineteenth century. After dissolving a sample of the ore in a mixture of H2SO4 and HNO3, trace metals that interfere with the analysis, such as Pb2+, Cu2+ and Fe3+, are removed by precipitation. Any cobalt and nickel in the sample are reduced to Co and Ni, isolated by filtration and weighed (point A). After dissolving the mixed solid, Co is isolated and weighed (point B). The amount of nickel in the ore sample is determined from the difference in the masses at points A and B. 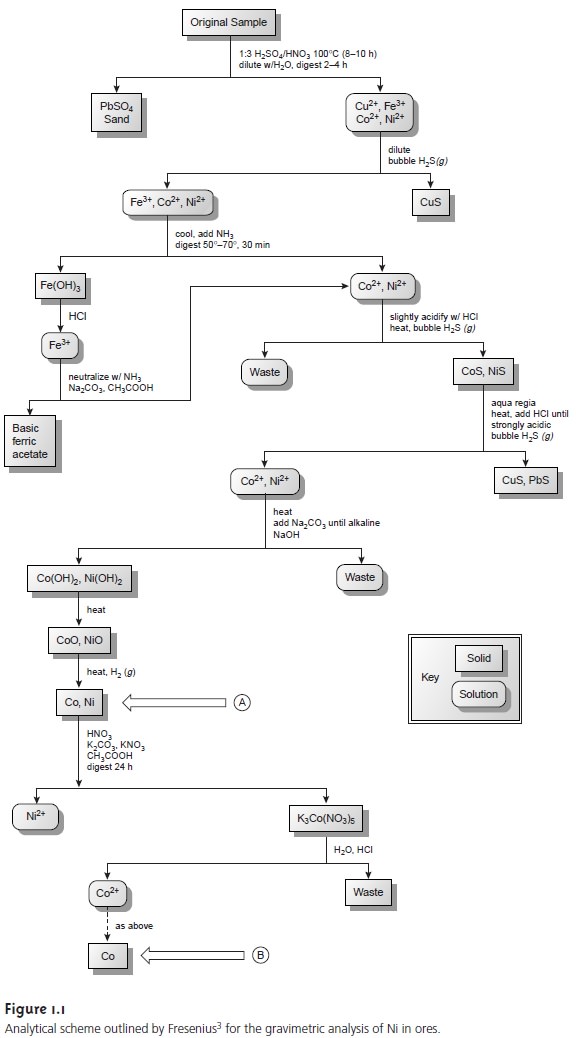 The combination of determining the mass of Ni2+ by difference, coupled with the need for many reactions and filtrations makes this procedure both time-consuming and difficult to perform accurately.

The development, in 1905, of dimethylgloxime (DMG), a reagent that selec- tively precipitates Ni2+ and Pd2+, led to an improved analytical method for deter- mining Ni2+ in ores.4 As shown in Figure 1.2, the mass of Ni2+ is measured directly, requiring fewer manipulations and less time. By the 1970s, the standard method for the analysis of Ni2+ in ores progressed from precipitating Ni(DMG)2 to flame atomic absorption spectrophotometry,5 resulting in an even more rapid analysis. Current interest is directed toward using inductively coupled plasmas for determin- ing trace metals in ores. 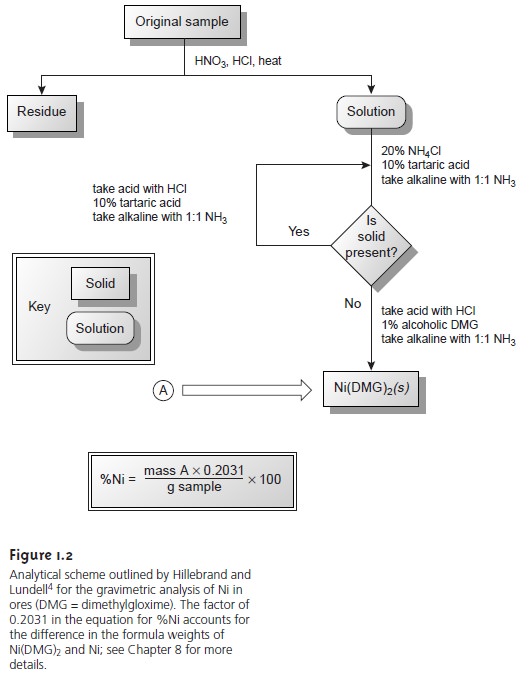 In summary, a more appropriate description of analytical chemistry is “. . . the science of inventing and applying the concepts, principles, and . . . strategies for measuring the characteristics of chemical systems and species.”6 Analytical chemists typically operate at the extreme edges of analysis, extending and improving the abil- ity of all chemists to make meaningful measurements on smaller samples, on more complex samples, on shorter time scales, and on species present at lower concentra- tions. Throughout its history, analytical chemistry has provided many of the tools and methods necessary for research in the other four traditional areas of chemistry, as well as fostering multidisciplinary research in, to name a few, medicinal chem- istry, clinical chemistry, toxicology, forensic chemistry, material science, geochem- istry, and environmental chemistry.

You will come across numerous examples of qualitative and quantitative meth- ods in this text, most of which are routine examples of chemical analysis. It is im- portant to remember, however, that nonroutine problems prompted analytical chemists to develop these methods. Whenever possible, we will try to place these methods in their appropriate historical context. In addition, examples of current re- search problems in analytical chemistry are scattered throughout the text.

The next time you are in the library, look through a recent issue of an analyti- cally oriented journal, such as Analytical Chemistry. Focus on the titles and abstracts of the research articles. Although you will not recognize all the terms and methods, you will begin to answer for yourself the question “What is analytical chemistry”?