Having noted that each field of chemistry brings a unique perspective to the study of chemistry, we now ask a second deceptively simple question.

Figure 1.3 shows an outline of the analytical approach along with some im- portant considerations at each step. Three general features of this approach de- serve attention. First, steps 1 and 5 provide opportunities for analytical chemists to collaborate with individuals outside the realm of analytical chemistry. In fact, many problems on which analytical chemists work originate in other fields. Sec- ond, the analytical approach is not linear, but incorporates a “feedback loop” consisting of steps 2, 3, and 4, in which the outcome of one step may cause a reevaluation of the other two steps. Finally, the solution to one problem often suggests a new problem. 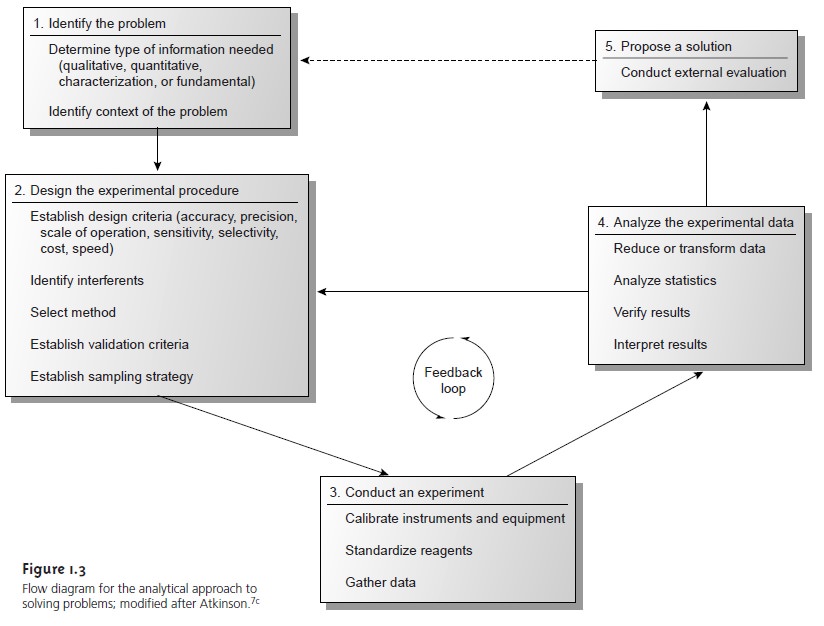 Analytical chemistry begins with a problem, examples of which include evalu- ating the amount of dust and soil ingested by children as an indicator of environ- mental exposure to particulate based pollutants, resolving contradictory evidence regarding the toxicity of perfluoro polymers during combustion, or developing rapid and sensitive detectors for chemical warfare agents.* At this point the analyti- cal approach involves a collaboration between the analytical chemist and the indi- viduals responsible for the problem. Together they decide what information is needed. It is also necessary for the analytical chemist to understand how the prob- lem relates to broader research goals. The type of information needed and the prob- lem’s context are essential to designing an appropriate experimental procedure.

Designing an experimental procedure involves selecting an appropriate method of analysis based on established criteria, such as accuracy, precision, sensitivity, and detection limit; the urgency with which results are needed; the cost of a single analy- sis; the number of samples to be analyzed; and the amount of sample available for analysis.

Finding an appropriate balance between these parameters is frequently complicated by their interdependence. For example, improving the precision of an analysis may require a larger sample. Consideration is also given to collecting, stor- ing, and preparing samples, and to whether chemical or physical interferences will affect the analysis. Finally, a good experimental procedure may still yield useless in- formation if there is no method for validating the results.

The most visible part of the analytical approach occurs in the laboratory. As part of the validation process, appropriate chemical or physical standards are used to calibrate any equipment being used and any solutions whose concentrations must be known. The selected samples are then analyzed and the raw data recorded.

The raw data collected during the experiment are then analyzed. Frequently the data must be reduced or transformed to a more readily analyzable form. A statistical treatment of the data is used to evaluate the accuracy and precision of the analysis and to validate the procedure. These results are compared with the criteria estab- lished during the design of the experiment, and then the design is reconsidered, ad- ditional experimental trials are run, or a solution to the problem is proposed. When a solution is proposed, the results are subject to an external evaluation that may re- sult in a new problem and the beginning of a new analytical cycle.

As an exercise, let’s adapt this model of the analytical approach to a real prob- lem. For our example, we will use the determination of the sources of airborne pol- lutant particles. A description of the problem can be found in the following article:

Before continuing, take some time to read the article, locating the discussions per- taining to each of the five steps outlined in Figure 1.3. In addition, consider the fol- lowing questions:

·              What criteria were considered in designing the experimental procedure?

·              Were there any potential interferences that had to be eliminated? If so, how were they treated?

According to our model, the analytical approach begins with a problem. The motivation for this research was to develop a method for monitoring the transport of solid aerosol particulates following their release from a high-temperature com- bustion source. Because these particulates contain significant concentrations of toxic heavy metals and carcinogenic organic compounds, they represent a signifi- cant environmental hazard.

Existing methods for monitoring the transport of gases were inadequate for studying aerosols. To solve the problem, qualitative and quantitative information were needed to determine the sources of pollutants and their net contribution to the total dry deposition at a given location. Eventually the methods developed in this study could be used to evaluate models that estimate the contributions of point sources of pollution to the level of pollution at designated locations.

Following the movement of airborne pollutants requires a natural or artificial tracer (a species specific to the source of the airborne pollutants) that can be exper- imentally measured at sites distant from the source. Limitations placed on the tracer, therefore, governed the design of the experimental procedure. These limita- tions included cost, the need to detect small quantities of the tracer, and the ab- sence of the tracer from other natural sources. In addition, aerosols are emitted from high-temperature combustion sources that produce an abundance of very re- active species. The tracer, therefore, had to be both thermally and chemically stable. On the basis of these criteria, rare earth isotopes, such as those of Nd, were selected as tracers. The choice of tracer, in turn, dictated the analytical method (thermal ionization mass spectrometry, or TIMS) for measuring the isotopic abundances of Nd in samples. Unfortunately, mass spectrometry is not a selective technique. A mass spectrum provides information about the abundance of ions with a given mass. It cannot distinguish, however, between different ions with the same mass. Consequently, the choice of TIMS required developing a procedure for separating the tracer from the aerosol particulates.

Validating the final experimental protocol was accomplished by running a model study in which 148Nd was released into the atmosphere from a 100-MW coal utility boiler. Samples were collected at 13 locations, all of which were 20 km from the source. Experimental results were compared with predictions determined by the rate at which the tracer was released and the known dispersion of the emissions.

Others have pointed out, with justification, that the analytical approach out- lined here is not unique to analytical chemistry, but is common to any aspect of sci- ence involving analysis.8 Here, again, it helps to distinguish between a chemical analysis and analytical chemistry. For other analytically oriented scientists, such as physical chemists and physical organic chemists, the primary emphasis is on the problem, with the results of an analysis supporting larger research goals involving fundamental studies of chemical or physical processes. The essence of analytical chemistry, however, is in the second, third, and fourth steps of the analytical ap- proach. Besides supporting broader research goals by developing and validating an- alytical methods, these methods also define the type and quality of information available to other research scientists. In some cases, the success of an analytical method may even suggest new research problems.