Have you ever received a personal letter from your friends or relatives?

* Have you ever received a personal letter from your friends or relatives?

* If yes, from whom and about what?

* Have you ever written a personal letter to anyone? 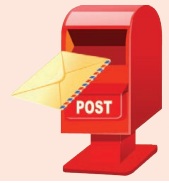 It was the summer of 1928, when Jawaharlal Nehru began writing letters to his young daughter, Indira, who was in Mussoorie at that time. In his letters, he speaks to his daughter on a wide range of topics, including languages, trade, history, geography, science, epics and evolution. When Indira was about to turn 13 in 1930, Nehru started sending her more detailed letters. These letters contained his understanding of the world which he wanted to further impart to his daughter. Even while he was in prison, he wanted to make sure that his child is not devoid of her father's teachings. Over the next four years, Nehru continuously wrote to his daughter from prison and his words are still inspiring.

The letters written by Nehru from the various prisons in British India to his daughter Indira, were published in 1942 as a book called "Glimpses of World History". It is a collection 196 letters on world history.