Observe the nouns in the following sentences and words before them.

* An apple is a healthy fruit.

* Two cats have drunk a bowl of milk.

* My father has many cars.

Determiners are the words that introduce a noun and provide some information about it (but do not describe it).

Determiners are followed by a noun.

* His son * Some students

* The quantifiers all, any, enough, less, a lot of, more, most, no, none of, some etc., are used with both countable and uncountable nouns.

* The quantifiers both, each, either, fewer, neither etc., are used only with countable nouns.

A. Choose the Correct Determiner

1.  Could you bring me those tools I left in the garden? (this, those, these)

3.  I found a one rupee coin in the playground while playing. (a, an, the)

8.  Kokila gave a pen to each child in the classroom on her birthday. (any, all, each)

12.  I always keep some money in my wallet for emergencies. (any, every, some)

13.  This year we are celebrating my sister’s second birthday. (a, two, second)

Look at the following sentences

She said, “I have won the first prize.” (Direct Speech)

She said that she had won the first prize. (Indirect Speech)

* In the first sentence, the reporter conveys the message of the girl using her actual words i.e., (“I have won the first prize.”)

* In the second sentence, the reporter conveys her message but in his own words without any change in the meaning. (She said that she had won the first prize.)

* In direct speech, we reproduce the actual words of the speaker. We place spoken words within inverted commas (“ ”).

* In indirect speech (also called Reported Speech), we report the words of the speaker with a few changes.

She said, “I have won the first prize.”

We make the following changes when reporting the statements.

- Reporting verb followed by ‘that’

- Change the tense, time and place

Kowsalya said that they watched a film the day before.

To report an imperative, use the pattern –

Karthi requested Ram to switch on the fan.

When reporting questions, we use the pattern:

She asked me where I went.

Note: If the 'wh' question is missing, if or whether is added.

(e.g). Praveena asked, “Have you watered the plants?”

Praveena asked if/whether I had watered the plants.

Sometimes it is not necessary to report everything that is said word by word. It may be better to use ‘reporting verbs’ which summarise what was communicated.

Below are some of the most commonly used verbs of this kind.

Remember these rules of change 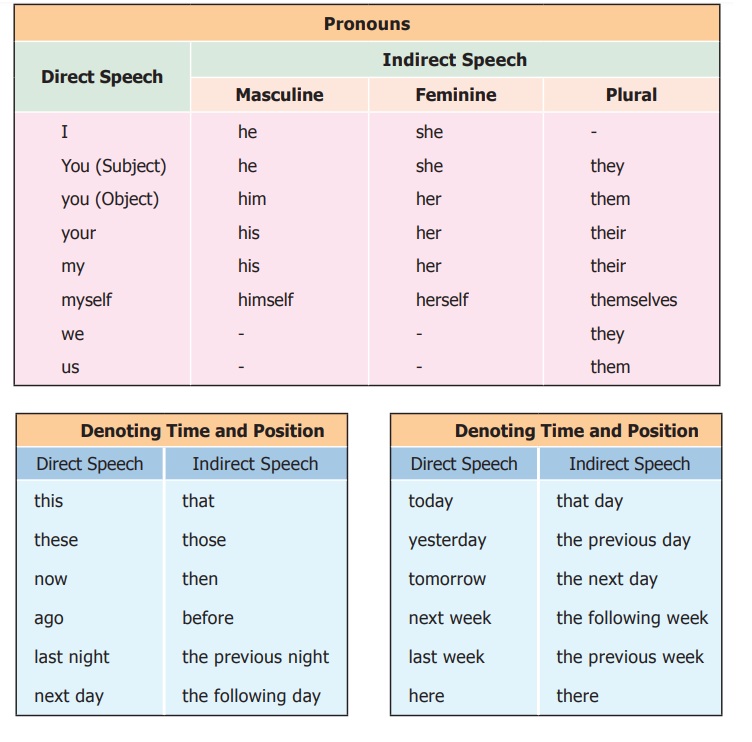 Speaker: I have to go.

Reporter: He said that he wanted to go.

Speaker: Can you hear me?

Reporter: She asked if you could hear her.

Reporter: He advised you to consult the doctor.

Speaker: I won't go to the party.

Reporter: He said that he wouldn't go to the pasty.

Speaker: When did you come?

Reporter: She asked when I had come

Reporter: She warned me not to touch the wire.

Reporter: He requested me to bring some water, (request)

Speaker: Will you help me?

Reporter: He asked if I would help him. (ask)

Answer: Pushpa advised not to spoil the eco-system.

2. Ebin said, “Have you booked the tickets to Delhi?”

Answer: Ebin asked if he had booked the tickets to Delhi.

3. Rehman said to Tilak, “When are we leaving to our native?”

Answer: Rehman asked Tilak when they were leaving to their native.

4. Maha said, “Lakshan, you should get up early in the morning.”

Answer: Maha told Lakshan that he should get up early in the morning.

5. Gladin said to his mother, “Can you, please, buy me a hot-chocolate?”

Answer: Gladin requested his mother if she could buy him a hot chocolate.

6. “Tomorrow I have to take a test in English”, said Sudha.

Answer: Sudha said that she had to take a test in English the next day.

7. Amali said to her sister, “I need your help to arrange the books in the shelf.”

Answer: Amali told her sister that she needed her help to arrange the book in the shelf.

8. “Why don’t you use crayons for colouring?” said Prabhu to his son.

Answer: Prabhu asked his son why he didn't use crayons for colouring.