Now read the letter from Jawaharlal Nehru to his daughter Indira.

It was the summer of 1928, when Jawaharlal Nehru began writing letters to his young daughter, Indira, who was in Mussoorie at that time. In his letters, he speaks to his daughter on a wide range of topics, including languages, trade, history, geography, science, epics and evolution. When Indira was about to turn 13 in 1930, Nehru started sending her more detailed letters. These letters contained his understanding of the world which he wanted to further impart to his daughter. Even while he was in prison, he wanted to make sure that his child is not devoid of her father's teachings. Over the next four years, Nehru continuously wrote to his daughter from prison and his words are still inspiring.

The letters written by Nehru from the various prisons in British India to his daughter Indira, were published in 1942 as a book called "Glimpses of World History". It is a collection 196 letters on world history.

Now read the letter from Jawaharlal Nehru to his daughter Indira.

On your birthday you have been in the habit of receiving presents and good wishes. Good wishes you will still have in full measure, but what present can I send you from Naini Prison? My presents cannot be very material or solid. They can be of the mind and spirit. Things that even the high walls of prison cannot stop.

You know sweetheart, how I dislike sermonising and doling out good advice. I have always thought that the best way to find out what is right and what is not right, what should be done and what should not be done, is not by giving a sermon, but by talking and discussing, and out of discussion sometimes a little bit of truth comes out. I have liked my talks with you and we have discussed many things, but the world is wide and beyond our world lie other wonderful and mysterious worlds. None of us need ever be bored or imagine that we have learned everything worth learning and become very wise.

But what am I to do then? A letter can hardly take the place of a talk; at best it is a one-sided affair. Imagine that I have made a suggestion to you for you to think over, as if we really were having a talk.

In history we read of great periods in the life of nations, of great men and women. Do you remember how fascinated you were when you first read the story of Joan of Arc, and how your ambition was to be something like her? Ordinary men and women are not usually heroic. They think of their bread and butter, of their children, of their household worries and the like. But a time comes when a whole people become interested in a great cause. Then history helps even simple, ordinary men and women to become heroes. Great leaders have something in them which inspires a whole people and makes them do great deeds . In India a great leader, full of love for all who suffer and eager to help them, has inspired our people to great actions and noble sacrifice. He has helped to make the starving, the poor and the oppressed free and happy.

* From which prison did Nehru write this letter?

* Did Nehru send any presents to Indira?

No, Nehru did not send any presents to Indira, but he sent his message in the letter mentioning that were his presents.

* What helps the ordinary men and women to become heroes?

History helps the ordinary men and women to become heroes.

Bapuji is in prison, but the magic of his message has stolen the hearts of India’s millions. Men and women, and even little children, come out of their little shells and become India’s soldiers of freedom. In India today we are making history, and you and I are fortunate to see this happening before our eyes and to take some part ourselves in this great drama.

If we are to be India’s soldiers, we have to respect India’s honour, and that honour is a sacred trust. It is no easy matter to decide what is right and what is not. One little test I shall ask you to apply whenever you are in doubt. Never do anything in secret or anything that you would wish to hide. For the desire to hide anything means that you are afraid, and fear is a bad thing and unworthy of you. Be brave, and all the rest follows.

You know that in our great Freedom Movement, under Bapuji’s leadership, there is no room for secrecy or hiding. We have nothing to hide. We are not afraid of what we do or what we say. We work in the sun and in the light. Even so in our private lives let us make friends with the sun and work in the light and do nothing secretly and if you do so, my dear, you will grow up a child of the light, unafraid and serene and unruffled, whatever may happen.

I have written a very long letter to you. And yet there is so much I would like to tell you. How can a letter contain it? Good-bye, little one, and may you grow up into a brave soldier in India’s service.

With all my love and good wishes.

* Who is addressed as ‘Bapuji’?

Mahatma Gandhi is addressed as Bapuji.

* What should the soldiers of India respect?

The soldiers of India should respect India's honour, which is a sacred trust. 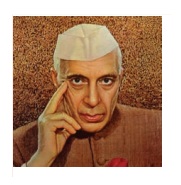 Jawaharlal Nehru (14 November 1889 – 27 May 1964) was the first Prime Minister of India and a central figure in Indian politics before and after independence. He emerged as an eminent leader of the Indian independence movement under the tutelage of Mahatma Gandhi and served India as Prime Minister from its establishment as an independent nation in 1947 until his death in 1964. He is considered to be the architect of the modern Indian nation-state: a sovereign, socialist, secular, and democratic republic. He was also known as ‘Pandit Nehru’ while many Indian children knew him as ‘Uncle Nehru’.