Viral Pathogenesis at the Cellular Level

The host cells show a variety of different responses to viral infection depending on the virus causing the infection and type of the cell infected.

Viral Pathogenesis at the Cellular Level

The host cells show a variety of different responses to viral infection depending on the virus causing the infection and type of the cell infected. Moreover, the outcome of infection is determined by the properties of the virus and the cell. The host cells may be (a) permissive, (b) semipermissive, and (c) nonpermissive.

·           A permissive cell is a cell that allows replication of a partic-ular type of strain of virus by providing biosynthesis com-pounds, such as transcriptional factors and posttransla-tional enzymes.

·           A nonpermissive cell does not provide any biosynthesis com-pound, hence does not support replication of the viruses.

·           A semipermissive cell may support some but not all the stages in viral infection.

Replication of virus in cell may cause a broad spectrum of effects, ranging from nonapparent cellular damage to rapid cell destruction.

·           Some other viruses may cause alterations in cells’ morphol-ogy, functional properties, malignant transformation, or antigenicity (Table 51-1). 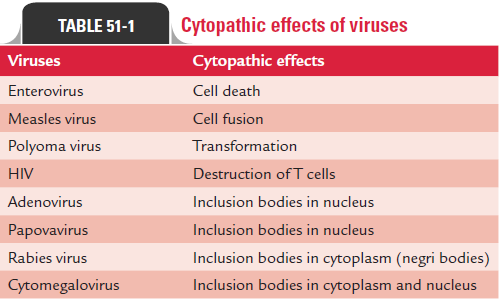 ·           In some conditions, viruses infect cells and replicate indepen-dently within the cells without causing any cellular injury to the infected cells. This is known as steady state infection.

The cellular changes produced by the virus may be due to many factors. These cellular changes may be caused (a) by viral take-over of macromolecular synthesis of proteins and enzymes by viruses instead of host cell, (b) by accumulation of virus pro-teins or particles, or (c) by alteration or disruption of cellular structure.

Production of early or nonstructured viral proteins often inhibits the production of host protein and synthesis of host DNA. The accumulation of large amounts of viral proteins or particles in the infected cells may lead to the modification or disruption of the cellular architecture.

At the cellular level, depending on the nature of the virus and the cell infected, the virus infection in a cell can produce any of the three infections (Fig. 51-2):

Some viruses cause failed or abortive infections in which those viruses do not multiply, therefore disappear from the cell.

Some viruses cause cell death or lytic infection. This occurs due to replication of virus in infected cell, which kills the target cell. The cellular injury caused by viruses may be due to combina-tion of several factors. Viruses adopt different mechanisms (Table 51-2) for preventing cellular growth and causing cell death as follows: 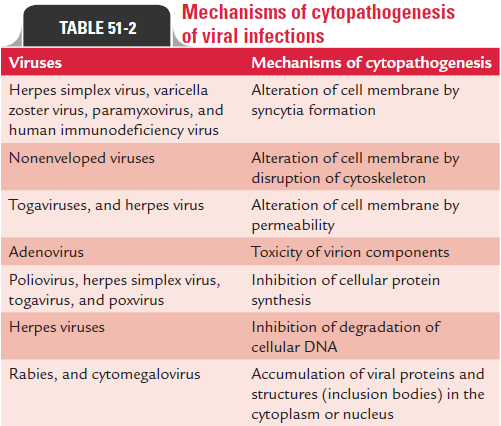 The accumulation of large amounts of viral macromolecules and viral progeny in infected cells during viral replication may disrupt the cellular structure or functions of the cell, or disrupt lysosomes causing autolysis.

Infections of cells with certain viruses cause the cells to fuse, resulting in the production of giant multinucleated cells. Infection by paramyxoviruses, herpes viruses, and retroviruses results in the expression of glycoproteins on the cell surface. This triggers the fusion of neighboring cells, resulting in the formation of large multinucleated giant cells called syncytia. Formation of syncytia facilitates spread of the virus from cell-to-cell and allows the virus to escape from the lytic effect of antibodies. The cell-to-cell fusion of infected cells is of two types:

1.        Fusion from without:In this type, cell fusion occurs in theabsence of new protein synthesis (e.g., Sendai viruses and other paramyxoviruses).

1.        Certain viruses cause alterations in the cytoplasm of infected cells, or lead to expression of virus-coded antigens on the surface of infected cells. For example, respiratory syncytial virus causes fusion of adjacent cell membrane, resulting in polykaryocytosis or formation of syncytia.

3.        Certain viral infections produce characteristic changes in the properties and appearance of target cells. For example, measles viruses, mumps viruses, adenoviruses, cytomega-loviruses, and varicella viruses cause chromosomal aberra-tions and degradations. Infection by adenovirus types 12 and 31 and HSV cause marginated chromatin ring in the nuclear membrane.

Transformation is an irreversible genetic process caused by the integration of viral DNA with the DNA of the host cell. Infection of cells with certain viruses causes transfor-mation of normal cells to malignant cells. The viruses that stimulate uncontrolled cell growth causing the transforma-tion of immortalization of the cell are known as oncogenicviruses.

Different oncogenic viruses cause transformation or immor-talization of the cells by different mechanisms as follows: (a) they promote or provide growth-stimulating genes, (b) they prevent apoptosis, and (c) they bring in mechanisms that limit DNA synthesis and cell growth.

The DNA oncogenic viruses infect semipermissive cells, which express only selected viral genes but do not produce complete virus.

Human T-cell lymphotropic virus (HTLV-1) is the only oncogenic retrovirus, known to cause oncogenesis in humans. It encodes a protein (tax) that transactivates gene expression, including genes for interleukin-2 and other growth-stimulat-ing lymphokines. The virus continues to produce virus in the transformed cells. Leukemia associated with HTLV-1 develops very slowly, 20–30 years after infection.

Cytopathic effect, or CPE, is a term that denotes any visible change in the appearance of target cells infected by viruses. Some viruses can be tentatively identified by the nature of CPE in cell culture, as well as by the types of cells in which these viruses cause CPE. 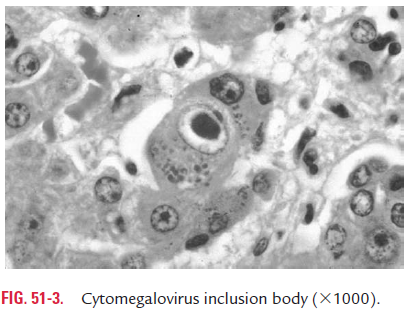 These inclusion bodies may be acidophilic, which appear as pink structures when stained with Giemsa or eosin methy-lene blue stains. They may be basophilic as produced by some viruses, such as adenovirus (Table 51-3). 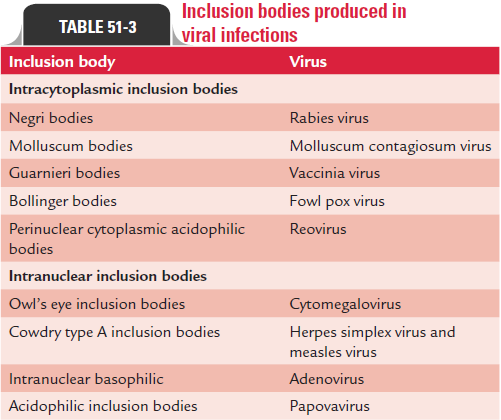 HSV typically causes a latent infection in neurons that lack the machinery to transcribe the immediate early viral genes essential for viral replication. But stress and other stimuli activate successful replication of virus, resulting in the infection.

Certain DNA viruses may cause infection of the cell, resulting in a latent or immortalizing infection. This occurs due to the failure of biosynthesis machinery of viruses for transcribing all the viral genes. The specific transcription fac-tor needed of such a virus may be expressed in growing cells or in specific tissues, or after treatment with hormones or cytokines.