The clinical manifestations of viral diseases depend on complex interaction of virus and host factors: 1. The age, general health, and immune status of the person. 2. The dose of the infective virus. 3. The genetics of the host and the virus.

The clinical manifestations of viral diseases depend on complex interaction of virus and host factors:

After a host is infected by virus, the immune status of the host plays an important role and determines the outcome of viral infection—whether it will be an asymptomatic infection, a benign disease, or a life-threatening disease.

·           It is short (1–3 days) in the infections caused by respiratory viruses or gastroenteritis caused by enteric virus, in which both the site of entry and lesions are the same.

·           Incubation period on the other hand is longer in sys-temic (usually 10–20 days) diseases in which viruses enter through the respiratory or alimentary tract and produce lesions in different target tissues away from the site of entry. But in some systemic viral diseases, such as yellow fever or dengue fever, it may be relatively shorter (5–6 days).

Incubation periods of common DNA and RNA viruses viral infections are summarized in Tables 51-5 and 51-6, respec-tively. In some viral infections, the incubation period may proceed without symptoms, causing asymptomatic infections or may cause nonspecific early symptoms known as the pro-drome. Incubation period is the important initial period beforethe manifestation of characteristic symptoms of the disease. During this period virus replicates in the body of the host but has not reached the target tissue or caused sufficient damage in tissues of the host to cause the disease. 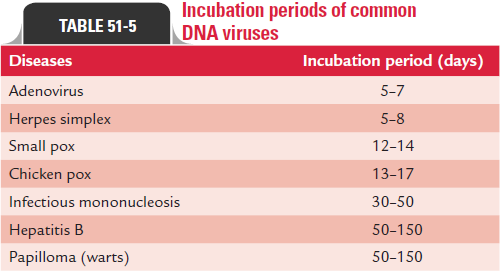 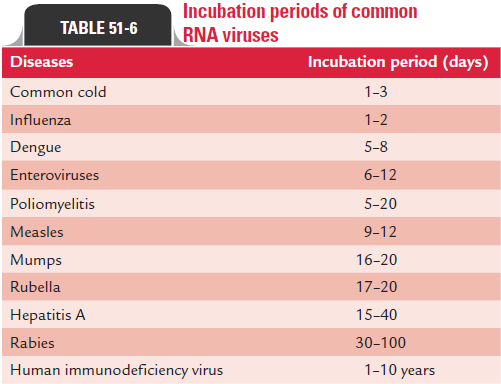 1.        the infection is controlled before the virus reaches the tar-get tissues,

4.        the severity of damage is below a functional threshold for

The inapparent infections are detected usually by serological tests detecting specific viral antibodies in the infected host. Epidemiologically, the patients with inapparent or asymptom-atic infection serve as the major source of infection.