The following are the drawbacks of SSB signal generation: 1. Generation of an SSB signal is difficult. 2. Selective filtering is to be done to get the original signal back. 3. Phase shifter should be exactly tuned to 90°.

• The following are the drawbacks of SSB signal generation:

1.     Generation of an SSB signal is difficult.

2.     Selective filtering is to be done to get the original signal back.

• To overcome these drawbacks, VSB modulation is used. It can view as a compromise between SSB and DSB-SC. Figure1.5 shows all the three modulation schemes. 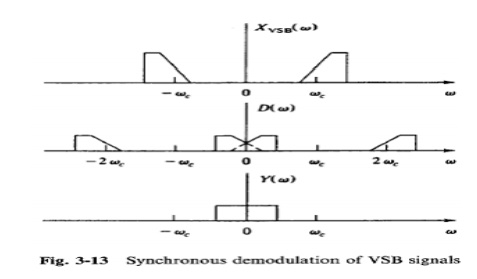 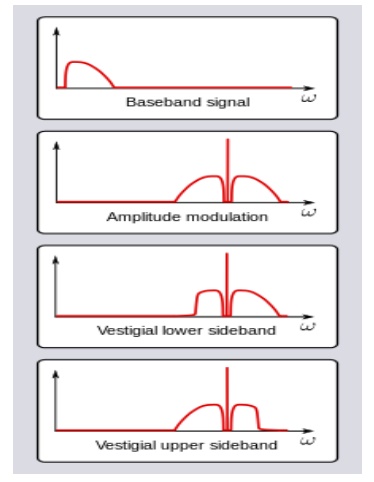 ·        In VSB modulation, one passband is passed almost completely whereas only a residual portion of the other sideband is retained in such a way that the demodulation process can still reproduce the original signal.

·        VSB signals are easier to generate because some roll-off in filter edges is allowed. This results in system simplification. And their bandwidth is only slightly greater than that of SSB signals (-25 %).

·        The filtering operation can be represented by a filter H(f) that passes some of the lower (or upper) sideband and most of the upper (or lower) sideband.

·        Heterodyning means the translating or shifting in frequency.

·        By heterodyning the incoming signal at ωRF with the local oscillator frequency ωLO, the message is translated to an intermediate frequency

ωIF, which is equal to either the sum or the difference of  ωRF and  ωIF.

·   If ωIF = 0, the bandpass filter becomes a low-pass filter and the original baseband signal is presented at the output. This is called homodyning

Methods to solve the image response in heterodyne receiver

1. Careful selection of intermediate frequency ωIF for a given frequency band.

2. Attenuate the image signal before heterodyning.

•  VSB is a form of amplitude modulation intended to save bandwidth over regular AM. Portions of one of the redundant sidebands are removed to form a vestigial side band signal.

•  The actual information is transmitted in the sidebands, rather than the carrier; both sidebands carry the same information. Because LSB and USB are essentially mirror images of each other, one can be discarded or used for a second channel or for diagnostic purposes.