"Modulation is the process of superimposing a low frequency signal on a high frequency carrier signal."

"The process of modulation can be defined as varying the RF carrier wave in accordance with the intelligence or information in a low frequency signal."

"Modulation is defined as the precess by which some characteristics, usually amplitude, frequency or phase, of a carrier is varied in accordance with instantaneous value of some other voltage, called the modulating voltage."

1. If two musical programs were played at the same time within distance, it would be difficult for anyone to listen to one source and not hear the second source. Since all musical sounds have approximately the same frequency range, form about 50 Hz to 10KHz. If a desired program is shifted up to a band of frequencies between 100KHz and 110KHz, and the second program shifted up to the band between 120KHz and 130KHz, Then both programs gave still 10KHz bandwidth and the listener can (by band selection) retrieve the program of his own choice. The receiver would down shift only the selected band of frequencies to a suitable range of 50Hz to 10KHz.

2. A second more technical reason to shift the message signal to a higher frequency is related to antenna size. It is to be noted that the antenna size is inversely proportional to the frequency to be radiated. This is 75 meters at 1 MHz but at 15KHz it has increased to 5000 meters (or just over 16,000 feet) a vertical antenna of this size is impossible.

3. The third reason for modulating a high frequency carrier is that RF (radio frequency) energy will travel a great distance than the same amount of energy transmitted as sound power.

The carrier signal is a sine wave at the carrier frequency. Below equation shows that the sine wave has three characteristics that can be altered.

The term that may be varied are the carrier voltage Ec, the carrier frequency fc, and the carrier phase angle θ. So three forms of modulations are possible.

Amplitude modulation is an increase or decrease of the carrier voltage (Ec), will all other factors remaining constant.

Frequency modulation is a change in the carrier frequency (fc) with all other factors remaining constant.

ü EXPLAINATION OF AM: 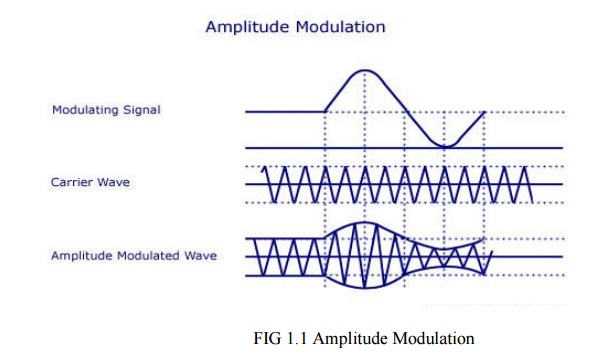 vc – Instantaneous value of the carrier

Vc – Peak value of the carrier

Wc – Angular velocity of the carrier

It must be noted that the phase angle remains constant in this process. Thus it can be ignored.

The amplitude of the carrier wave varies at fm.The amplitude modulated wave is given by the equation A = Vc + vm = Vc + Vm Sin wmt

ü Frequency Spectrum of AM Wave:

The frequency components present in the AM wave are represented by vertical lines approximately located along the frequency axis. The height of each vertical line is drawn in proportion to its amplitude. Since the angular velocity of the carrier is greater than the angular velocity of the modulating signal, the amplitude of side band frequencies can never exceed half of the carrier amplitude.

Thus there will not be any change in the original frequency, but the side band frequencies (wc – wm)/2 and (wc +wm)/2 will be changed. The former is called the upper side band (USB) frequency and the later is known as lower side band (LSB) frequency.

Since the signal frequency wm/2 is present in the side bands, it is clear that the carrier voltage component does not transmit any information.

It can also be defined as the range in which the amplitude of the carrier wave is varied by the modulating signal. m = Vm/Vc.

The percentage modulation lies between 0 and 80%.

Another way of expressing the modulation index is in terms of the maximum and minimum values of the amplitude of the modulated carrier wave. This is shown in the figure below. 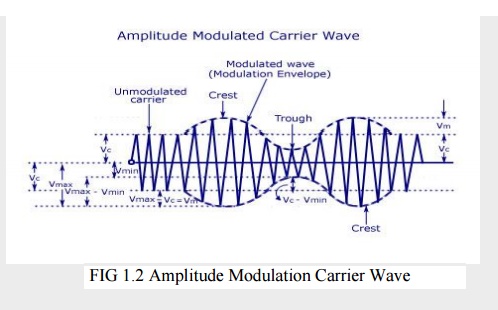 Substituting the values of Vm and Vc in the equation m = Vm/Vc , we get

ü   Power Relations in an AM wave:

A modulated wave has more power than had by the carrier wave before modulating. The total power components in amplitude modulation can be written as:

Each side band has a value of m/2 Vc and r.m.s value of mVc/2√2. Hence power in LSB and USB can be written as

In some applications, the carrier is simultaneously modulated by several sinusoidal modulating signals. In such a case, the total modulation index is given as

1.     Low Efficiency- Since the useful power that lies in the small bands is quite small, so the efficiency of AM system is low.

2.     Limited Operating Range – The range of operation is small due to low efficiency. Thus, transmission of signals is difficult.

3.     Noise in Reception – As the radio receiver finds it difficult to distinguish between the amplitude variations that represent noise and those with the signals, heavy noise is prone to occur in its reception.

4.     Poor Audio Quality – To obtain high fidelity reception, all audio frequencies till 15 KiloHertz must be reproduced and this necessitates the bandwidth of 10 KiloHertz to minimise the interference from the adjacent broadcasting stations. Therefore in AM broadcasting stations audio quality is known to be poor.