There are two methods used for SSB Transmission.

This is the filter method of SSB suppression for the transmission. Fig 1.3 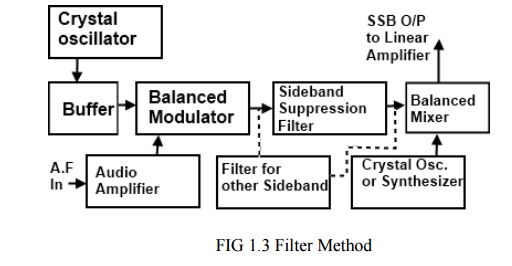 2.     This carrier frequency is then fed to the balanced modulator through a buffer amplifier which isolates these two satges.

3.     The audio signal from the modulating amplifier modulates the carrier in the balanced modulator. Audio frequency range is 300 to 2800 Hz. The carrier is also suppressed in this stage but allows only to pass the both side bands. (USB & LSB).

4.     A band pass filter (BPF) allows only a single band either USB or LSB to pass through it. It depends on our requirements.

6.     Then this band is amplified in driver and power amplifier stages and then fed to the aerial for the transmission.

The phaseing method of SSB generation uses a phase shift technique that causes one of the side bands to be conceled out. A block diagram of a phasing type SSB generator is shown in fig 1.4. 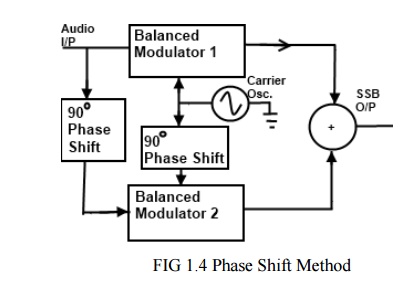   Ring modulation is a signal-processing function in electronics, an implementation of amplitude modulation or frequency mixing, performed by multiplying two signals, where one is typically a sine-wave or another simple waveform. It is referred to as "ring" modulation because the analog circuit of diodes originally used to implement this technique took the shape of a ring. This circuit is similar to a bridge rectifier, except that instead of the diodes facing "left" or "right", they go "clockwise" or "anti-clockwise". A ring modulator is an effects unit working on this principle.

  Ring modulators frequency mix or heterodyne two waveforms, and output the sum and difference of the frequencies present in each waveform. This process of ring modulation produces a signal rich in partials. As well, neither the carrier nor the incoming signal is prominent in the outputs, and ideally, not at all.

  Two oscillators, whose frequencies were harmonically related and ring modulated against each other, produce sounds that still adhere to the harmonic partials of the notes, but contain a very different spectral make up. When the oscillators' frequencies are not harmonically related, ring modulation creates inharmonic, often producing bell-like or otherwise metallic sounds.

  If the same signal is sent to both inputs of a ring modulator, the resultant harmonic spectrum is the original frequency domain doubled (if f1 = f2 = f, then f2 − f1 = 0 and f2 + f1 = 2f). Regarded as multiplication, this operation amounts to squaring. However, some distortion occurs due to the forward voltage drop of the diodes.

  Some modern ring modulators are implemented using digital signal processing techniques by simply multiplying the time domain signals, producing a nearly-perfect signal output. Before digital music synthesizers became common, at least some analog synthesizers (such as the ARP 2600) used analog multipliers for this purpose; they were closely related to those used in electronic analog computers. (The "ring modulator" in the ARP 2600 could multiply control voltages; it could work at DC.)

  Multiplication in the time domain is the same as convolution in the frequency domain, so the output waveform contains the sum and difference of the input frequencies. Thus, in the basic case where two sine waves of frequencies f1 and f2 (f1 < f2) are multiplied, two new sine waves are created, with one at f1 + f2 and the other at f2 - f1. The two new waves are unlikely to be harmonically related and (in a well designed ring modulator) the original signals are not present. It is this that gives the ring modulator its unique tones.

Ø   It allows better management of the frequency spectrum. More transmission can fit into a given frequency range than would be possible with double side band DSB signals.

All of the transmitted power is message power none is dissipate as carrier power.

1.  The cost of a single side band SSB receiver is higher than the double side band DSB counterpart be a ratio of about 3:1.

2.     The average radio user wants only to flip a power switch and dial a station. Single side band SSB receivers require several precise frequency control settings to minimize distortion and may require continual readjustment during the use of the system.