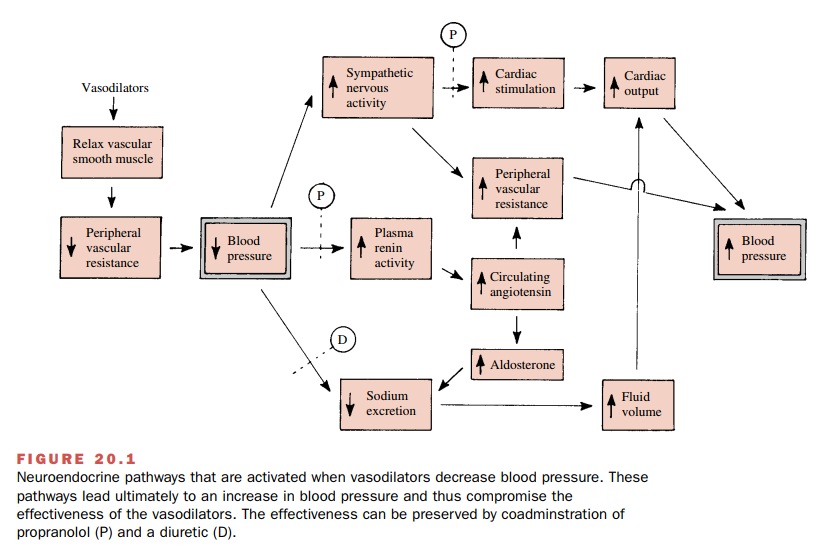 The drugs discussed in this section produce a direct re-laxation of vascular smooth muscle and thereby their actions result in vasodilation.

The drugs discussed in this section produce a direct re-laxation of vascular smooth muscle and thereby their actions result in vasodilation. This effect is called direct because it does not depend on the innervation of vascu-lar smooth muscle and is not mediated by receptors, such as adrenoceptors, cholinoreceptors, or receptors for histamine, that are acted on by classical transmitters and mediators.

The vasodilators decrease total peripheral resistance and thus correct the hemodynamic abnormality that is responsible for the elevated blood pressure in primary hypertension. In addition, because they act directly on vascular smooth muscle, the vasodilators are effective in lowering blood pressure, regardless of the etiology of the hypertension. Unlike many other antihypertensive agents, the vasodilators do not inhibit the activity of the sympathetic nervous system; therefore, orthostatic hypotension and impotence are not problems. Additionally, most vasodilators relax arterial smooth muscle to a greater extent than venous smooth muscle, thereby further minimizing postural hypotension.

Although vasodilators would appear to be ideal drugs for the treatment of hypertension, their effective-ness, particularly when they are used chronically, is se-verely limited by neuroendocrine and autonomic re-flexes that tend to counteract the fall in blood pressure. How these reflexes compromise the fall in blood pres-sure produced by the vasodilators is shown in Fig. 20.1. The diagram does not show all of the possible interrela-tionships but rather is meant to draw attention to the most prominent reflex changes. 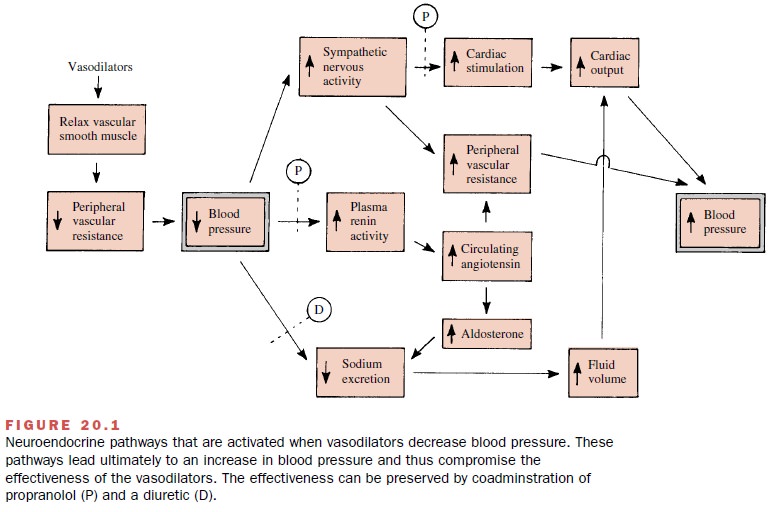 These reflexes include an augmentation of sympathetic nervous activity that leads to an increase in heart rate and cardiac output. Large increases in cardiac output occurring as a result of va-sodilator therapy will substantially counter the drug-induced reduction of blood pressure. Increased reflex sympathetic input to the heart also augments myocardial oxygen demand; this is especially serious in patients with coronary insufficiency and little cardiac reserve.

Plasma renin activity is elevated after treatment with vasodilators. The hyperreninemia appears to be due in part to enhanced sympathetic nervous activity. Elevated renin levels lead to an increase in the concentration of circulating angiotensin, a potent vasoconstrictor  and thus an increase in peripheral vascular resistance.

Thus, it seems that the lack of sympathetic nervous system inhibition produced by the vasodilators, which is advantageous in some ways, can also be a disadvantage in that reflex increases in sympathetic nerve activity will lead to hemodynamic changes that reduce the effective-ness of the drugs. Therefore, the vasodilators are gener-ally inadequate as the sole therapy for hypertension. However, many of the factors that limit the usefulness of the vasodilators can be obviated when they are ad-ministered in combination with a  β-adrenoceptor antag-onist, such as propranolol, and a diuretic. Propranolol reduces the cardiac stimulation that occurs in response to increases in sympathetic nervous activity, and the large increase in cardiac output caused by the vasodila-tors will be reduced. Propranolol also reduces plasma renin levels, and that is an additional benefit. The re-duction in NA+ excretion and the increase in plasma vol-ume that occurs with vasodilator therapy can be re-duced by concomitant treatment with a diuretic. These relationships are shown in Fig. 20.1.