Two important antihypertensive agents, α-methyldopa and clonidine, act predominantly in the brain (Fig. 20.2D). Although the details of their actions may differ in some respects, their antihypertensive activity is ulti-mately due to their ability to decrease the sympathetic outflow from the brain to the cardiovascular system. 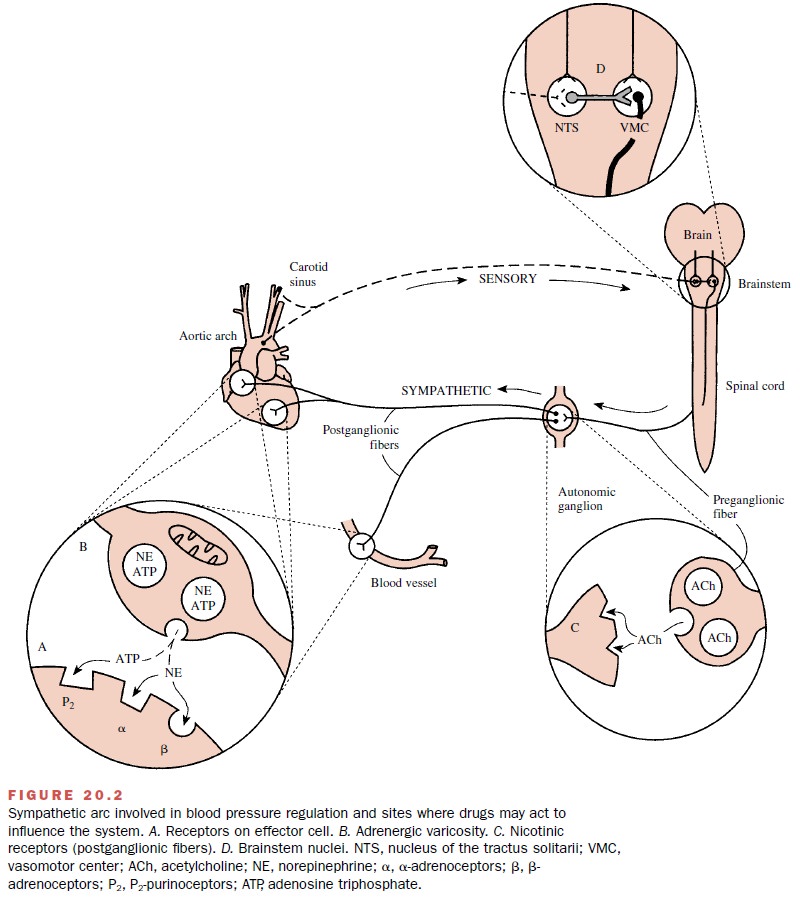 The spectrum of activity of α-methyldopa (Aldomet) lies between those of the more potent agents, such as guanethidine, and the milder antihypertensives, such as reserpine. α-methyldopa is a structural analogue of di-hydroxyphenylalanine (dopa) and differs from dopa only by the presence of a methyl group on the -carbon of the side chain.

A number of theories have been put forward to account for the hypotensive action of α-methyldopa. Current evidence suggests that for α-methyldopa to be an anti-hypertensive agent, it must be converted to -methyl-norepinephrine; however, its site of action appears to be in the brain rather than in the periphery. Systemically ad-ministered α-methyldopa rapidly enters the brain, where it accumulates in noradrenergic nerves, is con-verted to -methylnorepinephrine, and is released. Released -methylnorepinephrine activates CNS α-adrenoceptors whose function is to decrease sympathetic outflow. Why -methylnorepinephrine decreases sym-pathetic outflow more effectively than does the natu-rally occurring transmitter is not entirely clear.

Approximately 50% of an orally administered dose of α-methyldopa is absorbed from the gastrointestinal tract. Both peak plasma drug levels and maximal blood pressure–lowering effects are observed 2 to 6 hours af-ter oral administration. A considerable amount of un-changed α-methyldopa and several conjugated and de-carboxylated metabolites can be found in the urine.

The primary hemodynamic alteration responsible for the hypotensive effects of α-methyldopa remains in dis-pute. When the patient is supine, the reduction in blood pressure produced by α-methyldopa correlates best with a decrease in peripheral vascular resistance, car-diac output being only slightly reduced. When the pa-tient is upright, the fall in blood pressure corresponds more closely with a reduced cardiac output.

An important aspect of α-methyldopa’s hemody-namic effects is that renal blood flow and glomerular fil-tration rate are not reduced. As occurs with most sym-pathetic depressant drugs and vasodilators, long-term therapy with α-methyldopa leads to fluid retention, edema formation, and plasma volume expansion. While data conflict somewhat, it is generally thought that α-methyldopa suppresses plasma renin activity.

α-Methyldopa is not generally believed to be suitable for monotherapy of primary hypertension. Because plasma volume increases as the duration of -methyl-dopa therapy is extended, the drug should be used in conjunction with a diuretic; this will produce a signifi-cantly greater fall in blood pressure than would occur with either drug used alone. Because α-methyldopa low-ers blood pressure without compromising either renal blood flow or the glomerular filtration rate, it is particu-larly valuable in hypertension complicated by renal dis-ease. However, if end-stage renal failure accompanies se-vere hypertension, α-methyldopa may not be effective.

The presence of α-methyldopa and its metabolites in the urine reduces the diagnostic value of urinary cat-echolamine measurements as an indicator of pheochro-mocytoma, since these substances interfere with the flu-orescence assay for catecholamines.

The most commonly encountered side effects of α-methyldopa are sedation and drowsiness. These CNS ef-fects are probably the result of reductions in brain cat-echolamine levels. Other side effects, also typical of sympathetic depression, are dry mouth, nasal conges-tion, orthostatic hypertension, and impotence.

Autoimmune reactions associated with -methyl-dopa treatment include thrombocytopenia and leukope-nia. Since a few cases of an α-methyldopa–induced hep-atitis have occurred, the drug is contraindicated in patients with active hepatic disease. Flulike symptoms also are known to occur.

Clonidine (Catapres) is effective orally and is used pri-marily for the treatment of moderate hypertension. It is structurally related to the α-adrenoceptor antagonists phentolamine and tolazoline. Clonidine, however, is not an α-blocker, but is actually an -agonist. Its antihyper-tensive effectiveness appeared paradoxical until it was recognized that clonidine activated central α 2-receptors, thus reducing sympathetic outflow to the periphery.

Guanabenz (Wytensin) and guanfacine (Tenex) are two drugs with considerable structural similarity to clonidine. These agents also are central α2-agonists and exhibit an antihypertensive profile similar to that of clonidine.

Clonidine is well absorbed after oral administration. Peak plasma levels occur between 2 and 4 hours after drug administration and correlate well with pharmaco-logical activity. The plasma half-life in patients with nor-mal renal function is 12 hours. Urinary excretion of clonidine and its metabolites accounts for almost 90% of the administered dose, and fecal excretion accounts for the rest. Approximately 50% of an administered dose is excreted unchanged; the remainder is oxida-tively metabolized in the liver.

An acute intravenous injection of clonidine may pro-duce a transient pressor response that apparently is due to stimulation of peripheral vascular α -receptors. The pressor response does not occur after oral administra-tion, because the drug’s centrally mediated depressor action overrides it.

Renal blood flow and glomerular filtration are not decreased, although renal resistance is diminished. Like α-methyldopa, it is a useful agent for hypertension complicated by renal disease. Plasma renin activity is re-duced by clonidine, presumably as a result of a centrally mediated decrease in sympathetic stimulation of the juxtaglomerular cells of the kidney.

The primary indication for clonidine use is in mild and moderate hypertension that has not responded ade-quately to treatment with a diuretic or a β-blocker. Since clonidine causes sodium and water retention and plasma volume expansion, it generally is administered in combi-nation with a diuretic. A vasodilator can be added to the clonidine–diuretic regimen in the treatment of resistant forms of hypertension. Such drug combinations can be quite effective, since the reflex increases in heart rate and cardiac output that result from vasodilator adminis-tration are reduced or negated by clonidine-induced de-creases in heart rate and cardiac output.

For severely hypertensive patients, clonidine has been used in combination with a diuretic, a vasodilator, and a β-blocker. Some care must be taken, however, be-cause the coadministration of clonidine and a β-blocker may cause excessive sedation. Clonidine is especially useful in patients with renal failure, since its duration of action is not appreciably altered by renal disease and it does not compromise renal blood flow.

It is estimated that about 7% of patients receiving cloni-dine discontinue the drug because of side effects. Although the symptoms are generally mild and tend to subside if therapy is continued for several weeks, as many as 50% of the patients complain of drowsiness and dryness of mouth. Other untoward effects include constipation, nausea or gastric upset, and impotence. These effects are characteristic of interference with the functioning of the sympathetic nervous system.

A potentially dangerous effect is rebound hyperten-sion, which follows abrupt withdrawal of clonidine ther-apy. This posttreatment hypertension appears to be the result of excessive sympathetic activity. The genesis of the syndrome is not well understood. A contributing factor may be development of supersensitivity in either the sympathetic nerves or the effector organs of the car-diovascular system due to the clonidine-caused chronic reduction in sympathetic activity. Thus, when the drug is abruptly withdrawn, an exaggerated response to “nor-mal” levels of activity may occur. If treatment with clonidine is terminated gradually, rebound hyperten-sion is unlikely. Patients should be warned of the danger of abruptly discontinuing clonidine treatment.