Increase in height, achieved by growth at the apical meristem, is inevitably followed by at least some degree of increase in stem thickness.

Increase in height, achieved by growth at the apical meristem, is inevitably followed by at least some degree of increase in stem thickness. This is achieved by different types of meristems in different species. In woody eudicots and most magnoliids (but not monocots), secondary vascular tissue (both xylem and phloem) is produced by the vascular cambium (Fig. 2.5), which usually becomes active at a short distance behind the stem apex. The vascular cambium is initiated between xylem and phloem within vascular bundles, but soon consists of an unbroken cylinder of meristematic cells. It typically generates secondary xylem (wood) at its inner edge and secondary phloem at its outer edge, though plants with anomalous secondary growth do not always follow this pattern. The amount of secondary vascular tissue produced is extremely variable, depending on the habit of the plant. Vascular cambium is absent in monocots and some herbaceous eudicots (e.g. Ranunculus) and magnoliids (e.g. Saururus). 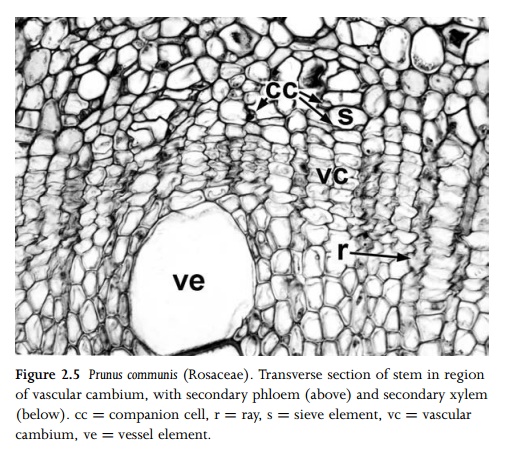 The vascular cambium is a single cell layer (uniseriate) or several cell layers (multiseriate) if xylem and phloem mother cells are included55. It is a complex tissue consisting of bothfusiform initials and ray initials, which form the axial and radial systems respectively. Both fusiform and ray initials are vacuolate (unlike most meristematic tissue) and plastid-rich. Fusiform initials are axially elongated cells with tapering ends. They divide periclinally to form the axial elements of secondary tissues: tracheary elements, fibres and axial parenchyma in secondary xylem, and sieve elements, companion cells and fibres in second-ary phloem. Ray initials are isodiametric cells that divide peri-clinally to form ray parenchyma cells in both xylem and phloem. Fusiform initials sometimes give rise to new ray initials as the stem increases in circumference and new rays are formed.