Secondary xylem (wood) varies considerably between species. The texture and density of a particular type of wood depend on the size, shape and arrangement of its constituent cells.

Secondary xylem (wood) varies considerably between species. The texture and density of a particular type of wood depend on the size, shape and arrangement of its constituent cells. Wood is composed of a matrix of cells (Fig. 2.6), some arranged parallel to the long axis (fibres, vessels and chains of axial parenchyma cells), and others (ray parenchyma cells) forming the wood rays that extend radially from the vascular cambium towards the pith. The precise cellular arrangement in wood is often characteristic of species or genera. To observe their structure, woods are sectioned transversely (transverse section: TS) and in two longitudinal planes: along the rays (radial longitudinal section: RLS) and perpendicular to the rays (tangential longi-tudinal section: TLS). In some woods the vessels are solitary when viewed in transverse section  (Figs 2.6, 2.10), but in other woods they are arranged in clusters or radial chains (Fig. 2.9). Axial parenchyma cells may be independent of the vessels (apotracheal) or associated with them (paratracheal), and sometimes occur in regular tangential bands. The relative abundance of axial paren-chyma varies in different species, from sparse (or even completely absent) to rare cases such as Ochroma pyramidale (balsa), in which axial parenchyma cells are often more abundant than fibres, making this type of wood soft and easy to carve. 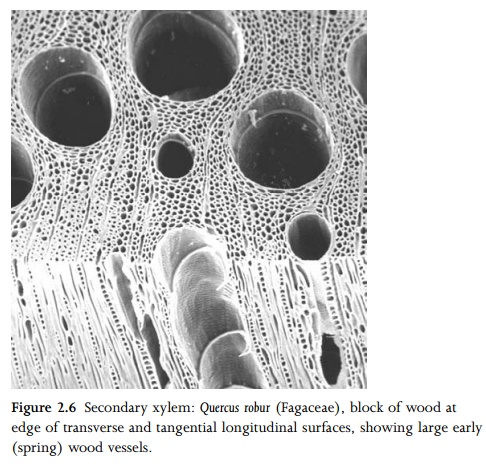 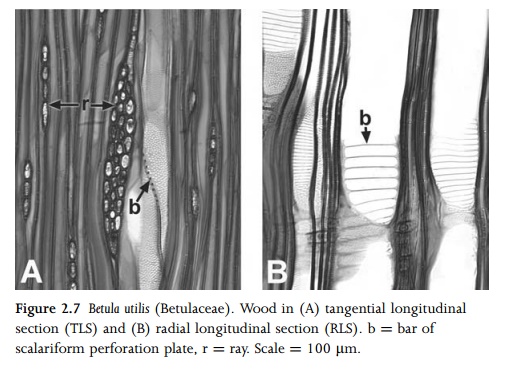 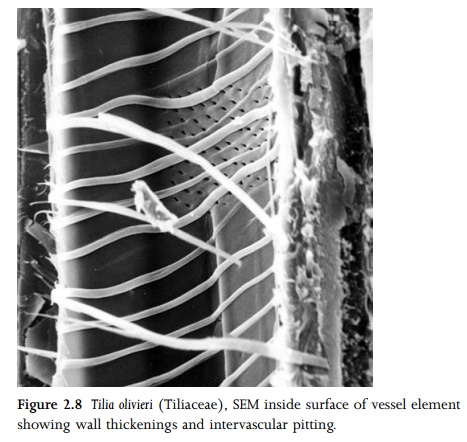 Rays are termed uniseriate if they are one cell wide tangentially, and multiseriate if they are more than one cell wide, viewed in TS and TLS. Sometimes both uniseriate and multiseriate rays occur in the same wood, as in Quercus. Ray cells vary in shape (best viewed in RLS); homocellular rays are composed of cells of similar shapes, whereas in heterocellular rays the cells are of different shapes. Other aspects of variation in the structure of hardwoods include the presence of either axial or radial secretory canals in some woods (Fig. 2.10), the storied (stratified) appearance of various elements, particularly rays, or the fine structure of the vessel walls (intervascular pitting, perforation plates and wall thickenings:). For example, in Tilia cordata (Fig. 2.8), the vesselelement walls are helically thickened, and in many Fabaceae the pit apertures are surrounded by numerous warty protuberances, termed vesturing19. Perforated ray cells, an unusual feature of some woods, are ray cells that link two vessel elements and themselves resemble and function as vessel elements, with perforation plates corresponding to those of the adjacent vessel elements. However, like other ray cells, perforated ray cells are formed from ray initials rather than from fusiform initials, like vessel elements. 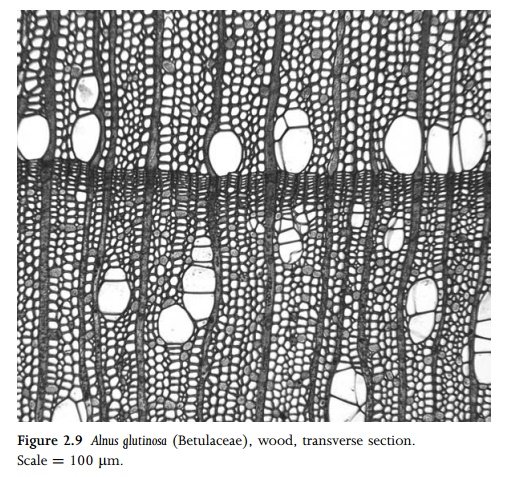 In many woody temperate plants cambial activity is seasonal (usually annual), which results in the formation of growth rings. The secondary xylem formed in the early part of the season (early wood or spring wood) is generally less dense and consists of thinner-walled cells than the xylem formed later in the growing season (late wood or summer wood). In ring-porous woods the vessels are considerably larger in early wood than in late wood (Fig. 2.11). In diffuse porous woods the main distinction between early and late wood is in size and wall thickness of the fibres (Fig. 2.9). As woody plants age and their trunks increase in girth, the central area becomes non-functional with respect to water transport or food storage, and the vessels frequently become blocked by tyloses. Tyloses are formed when adjacent parenchyma cells grow into the vessels through common pit fields. The central non-functional area of the trunk, the heartwood, is generally darker than the outer living sapwood. 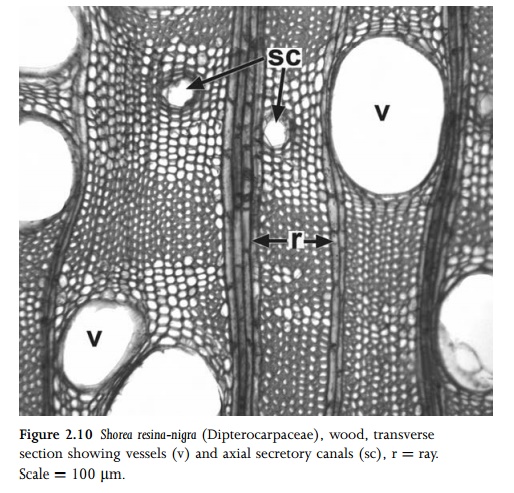 In some woody angiosperms, particularly climbing plants (lianas) such as many Bignoniaceae (Fig. 2.12), secondary growth does not fit the ‘‘normal’’ pattern of xylem and phloem production, and is termed anomalous secondary growth. For example, some plants develop regions of phloem (included or interxylary phloem) embedded in the xylem, either in islands (e.g. in Avicennia) or in alternating concentric bands. Other examples have irregularly divided or deeply fissured areas of xylem and phloem, or stems that are flattened or otherwise 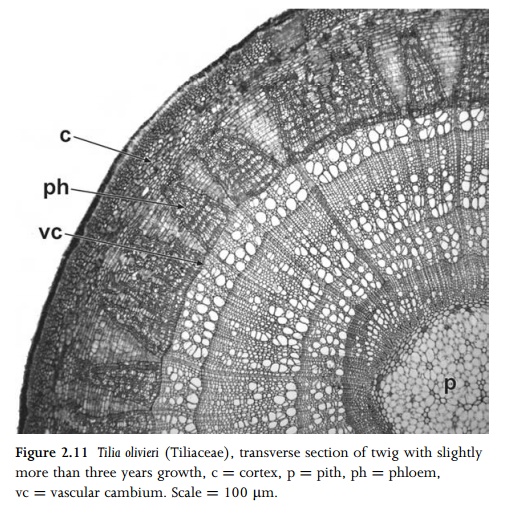 irregularly shaped. Such anomalous forms are achieved either by the formation of new vascular cambia in unusual positions or by the unusual behaviour of the existing cambium in producing phloem instead of xylem at certain points. 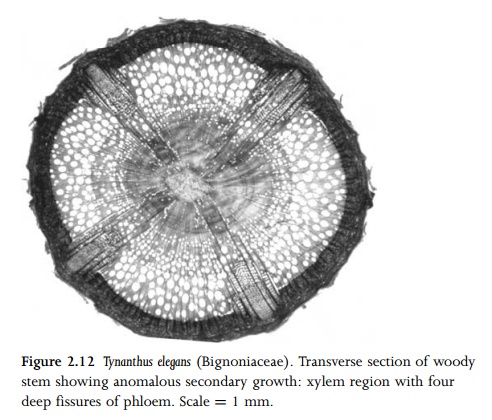