At regions of leaf insertion on the stem (nodes), the vasculature of the leaf and stem are connected. Openings (termed lacunae or leaf gaps) occur in the stem vascular cylinder beneath their point of contact.

At regions of leaf insertion on the stem (nodes), the vasculature of the leaf and stem are connected. Openings (termed lacunae or leaf gaps) occur in the stem vascular cylinder beneath their point of contact (Fig. 2.4). In eudicots and magnoliids, nodal anatomy is often characteristic of taxonomic groups, particularly the number and arrangement of leaf traces and leaf gaps. 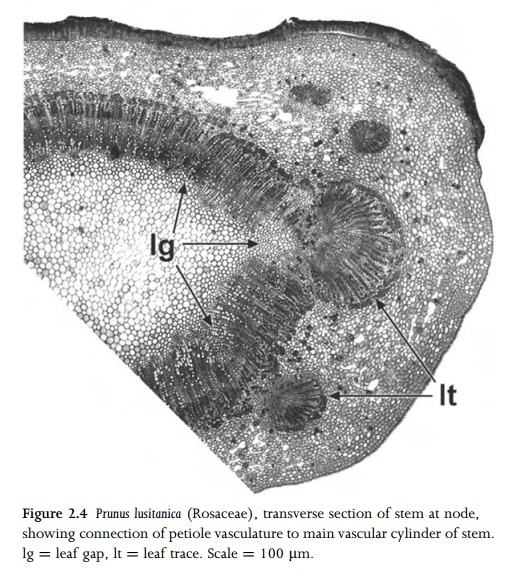 Nodes may be unilacunar, trilacunar or multilacunar, depending on the number of leaf gaps in the stem vascular cylinder. This feature is most obvious in stems in which there is otherwise a continuous vascular cylinder, especially where a limited amount of secondary thickening has taken place; as a result, nodal anatomy has been studied far more extensively in woody than herbaceous plants54. Sometimes the number of leaf gaps per node varies within a species or individual, usually increasing with increased plant size and age67.

The number of leaf traces departing from each gap is also generally characteristic of a species, but may vary within a plant, especially in species with unilacunar and trilacunar nodes. For example, in Clerodendrum two traces typically depart from a single gap, and in Prunus a single trace departs from each of three gaps in the central vascular cylinder (Fig. 2.4). In Quercus up to five traces depart through a trilacunar node. Normally, leaf trace bundles are initiated acropetally from the stem procambial system near the shoot apex, to serve developing primordia. However, in some species (e.g. Populus deltoides) subsidiary vascular bundles are initiated at the base of each developing primordium, and grow basipetally to meet the stem procambial trace.

Nodal vasculature is further complicated by the axillary bud vascular traces, which are connected to the main stem vascu-lature immediately above the leaf gaps. In most species two traces diverge to supply each bud or branch.

In large woody trees, the junction of the trunk and its branches is characterized by a complex arrangement of secondary vascular tissue, which typically forms a collar around the base of the branch99. This branch collar is enveloped by a trunk collar, which links the vascular tissue of the trunk above and below the branch. There is no direct connection of xylem from the trunk above a branch into the branch xylem, as the tissues are oriented perpendicular to each other. If a branch dies, a protection zone forms around its base to prevent spread of infection into the trunk, and the branch is often shed.