Uses of the Computer Networks

Uses of the Computer Networks

The computer networks play a major role in providing information to large , small organization as well as common man. Now a days almost all the companies, bank and stores have implemented the computerized transactions. It may be in same campus, building, city, or at different places (or) cities. For all these purpose the computer networks are used.

The common uses of computer network are

Using computer networks, we can interact with the different people with each other all over the world. It provides a powerful communication among widely separated employees, team, section. They can easily communicate at very low cost via mobile, social media, telephone, e -mail, chatting, video telephone, video conferencing, SMS, MMS, groupware etc…

Resource sharing means when one device is accessed by many systems. It allows all kind of programs, equipment’s and available data to be accessed by anyone via network irrespective of the physical location of the resource. Simply resource sharing is sharing such as printers, scanner, PDA, fax machine, and modems. For example, many computers can access one printer if it is in network.

In twenty first century, communication is very important factor for successful business operations. There by with the growth of computer network and speedy Internet services, business also developed drastically.

With the development of cloud computing, global access and security issues were restricted. Internet conversation made conversation faster, quick decision making and money saving e-banking paved way for easy transactions. Business large or small scale B2C, B2B, B2G,C2B, C2C, C2G, G2B,G2C, G2G or commercial that transfer information across the Internet can be done. Cheap marketing and easy selection of products through Internet with customers satisfaction can also be done. Company renewals, license, other certificates, bill payments, receipts, invoice, stock maintenance, can be done without any geographical boundaries via Internet and computer networks. Government subsidies were available for their business to promote their business by digitization.

Direct human interactions are reduced because of Internet. Buyer directly purchases any product from manufacturer with less cost, middle person brokerage charges are reduced. The network connectivity in business is shown in Figure 10.5

Now a day, network has become common as it facilitates communication among devices with in the close vicinity of a home. Devices in this network can be smart devices, mobile computers, network printers which are capable of interacting and thereby increase the quality of life inside home in a variety of ways like automation of repetitive tasks, increased personal productivity, enhanced home security and easier access to entertainment. Networks at home were connected in two ways they are:

A Wired network system is connected with a network cable . For example speakers, CCTV, printers, outdoors, and scanners etc., with cables.

A Wireless network is connecting devices like tablets(tab), indoor cameras and E-readers, etc., without cables (WiFi). 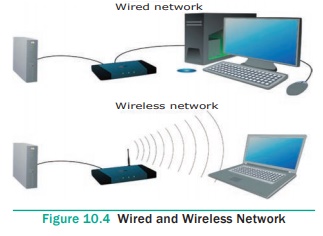 Mobile network is the network connecting devices without cable (wireless). Mobile computers, such as laptop, tablet, and hand held computers, were fastest growing segments. At land areas network was distributed as cells, each will be served by single – location transceiver, but generally three cell sites or a base transceiver station. This base station provides the cell with network coverage and other features that can be utilized for transmission of voice, data and other content as well. Joining together all radio coverage is called as wide geographical area. This portable transceivers used to communicate with one another with fixed transceivers and moving via more than one cell during transmission. For example mobiles, tablets, pagers, laptops, engaged with mobile broadband just like modems etc. Refer Figure 10.6

● Less consumption of power is used by mobile devices compared to a single transmitter or satellite since the cell towers are closer.

● Huge capacity than a large transmitter, at single frequency can be used for different or many links as long as they are in different in cells.

Mobile phone converts voice, text, multi-media message or data calls into Radio-frequencies (RF). Mobile phone base stations transmit and receive these RF signals and connects callers to other phones and other network.

Private cellular networks can be used at various locations like research, large organizations and small industries.

After the reach of mobile and access to Internet work progress faster. People can be in touch with others even while traveling. Important informations can be received any time without much problems. Searching important topics, checking mail, watching progress of company can be done easily sitting at one place. Adequate computer knowledge is sufficient to access Internet via mobile network. 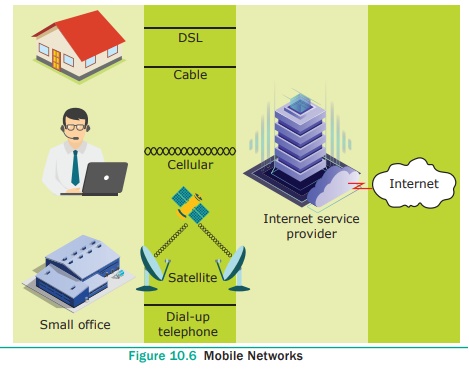 Through the social media we share our thoughts, ideas, files and also chats. Refer Figure 10.7 given below. 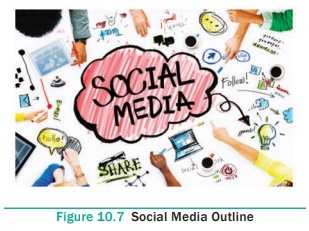 ● Frequent return visits. Healthy social net have a group of members who check in regularly to contribute their share and also for new updates

● Human relationship building. The common goal of most social networks is to allow interaction among people, which create stronger connection with people of different communities.

Besides being a fun place to meet and relax with people, social networking leads to some extremely useful benefits to individuals and communities:

● Group information sharing over long distances. Although friends and family members can keep in contact via mobile phone calls or by text messages, social nets provide a much richer environment for staying connected. We can also share photo albums, videos and convey daily wishes through the social network. Group discussions and Group chats go on in various groups through which people are kept in touch with each other.

Business people can market their products through these networks.

● Fostering diversity of thought. Some critics of social networks say that online communities attract people by similar interests and backgrounds. Indeed, when the people with different opinions do get together on online, many discussions seem to degenerate into personal attacks and so-called “flame wars.” The arguments goes online, healthy debate takes place and some of them become viral also.

Such arguments and talks bring out a relaxation for busy people from their regular work schedules. It also enriches with current affairs and keep in touch with people.