A set of computers connected together for the purpose of sharing resources is called as computer networks.

A set of computers connected together for the purpose of sharing resources is called as computer networks. At present, Internet is the most common resource shared everywhere. Some of the shared resources shown in Figure 10.1 are file server, web camera, speakers, printer, scanner, fax machine etc., Accessing services such as (World Wide Web), Digital audio, Digital video which are shared to use applications, software, and storage servers. 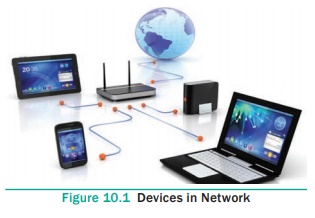 Computer networking is a technique of digital telecommunications network one that permits nodes to share its resources. This computer networking exchanges the data with each other through wired or wireless connections between different terminals called nodes. The data from these wires is transferred over any cable media such as fiber optic cable wire or a wireless media such as WiFi.

A Computer which is connected to a network is called as node. The data originates and terminates at these particular nodes is called as a source and destination. In networking, nodes are identified by its IP addresses i.e.,(network address) and can include hosts such as mobile phones , tabs , personal computers, huge servers and other networking device. Connecting more than one device is called as network.