Depending on the size and the services available and functions rendered, urban centers are designated as town, city, million city, conurbation, Megalopolis.

The census of India, 1991 defines urban settlements as “All places which have municipality, corporation, cantonment board or notified town area committee and have a minimum population of 5000 persons, at least 75 per cent of male workers are engaged in non-agricultural pursuits and a density of population of at least 400 persons per square kilometers are urban settlements.

Depending on the size and the services available and functions rendered, urban centers are designated as town, city, million city, conurbation, Megalopolis.

The concept of ‘town’ can best be understood with reference to ‘village’. Population size is not the only criterion. Functional contrasts between towns and villages may not always be clear cut, but specific functions such as, manufacturing, retail and wholesale trade, and professional services exist in towns.

A city may be regarded as a leading town. Cities are much larger than towns and have a greater number of economic functions. They tend to have transport terminals, major financial institutions and regional administrative offices. When the population crosses the one million mark it is designated as a million city. 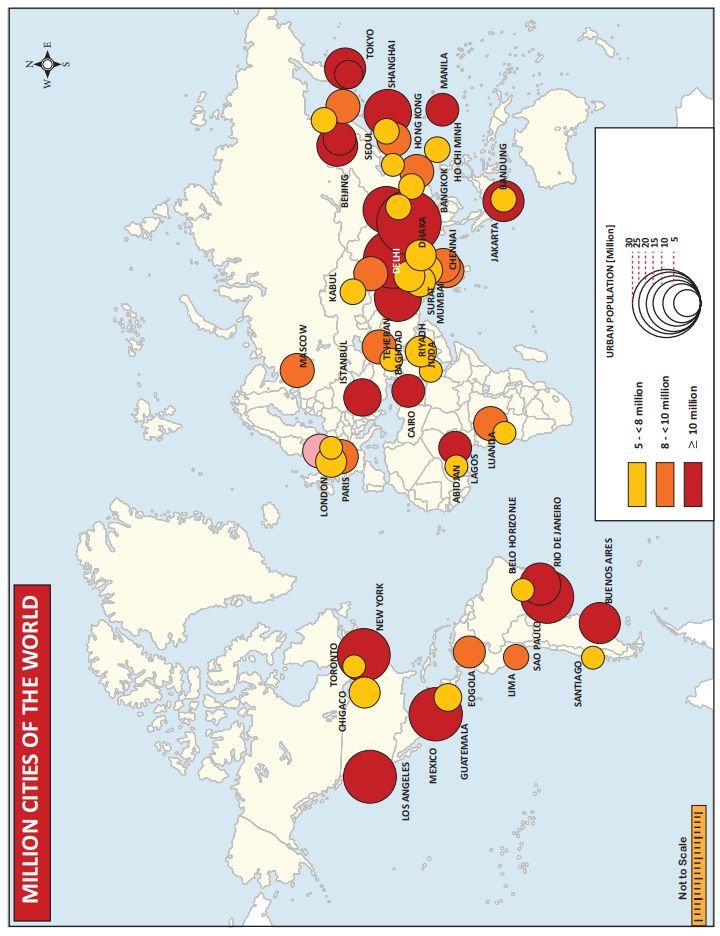 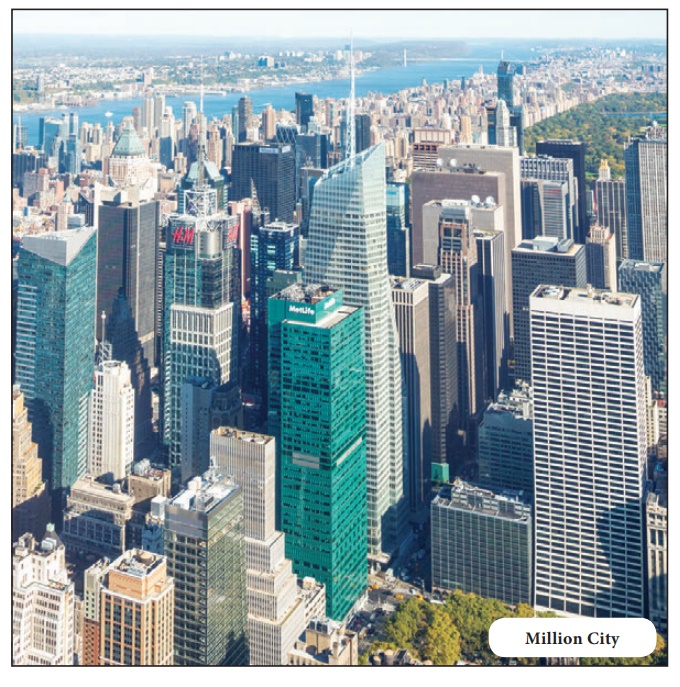 The term conurbation was coined by Patrick Geddes in 1915 and applied to a large area of urban development that resulted from the merging of originally separated towns or cities. Greater London, Manchester, Chicago and Tokyo are examples. In India, Hyderabad and Cochin are the examples of conurbation cities.

This Greek word “Megalopolis” meaning “great city”, was popularized by Jean Gottman (1957) and signifies ‘super- metropolitan’ region extending, as union of conurbations. The urban landscape which stretches from Boston in the north to south of Washington in the U.S.A is the best known example of a megalopolis.

In 2001, places were designated as urban or towns on the following principles.

(a) All places with Municipality, Corporation, Cantonment Board, Sanitary Board, Notified Area Committee etc.

(b) All other places which satisfy the following criteria.

ii) At least 75 per cent of the male working population being engaged in non-agricultural (and allied) activity. 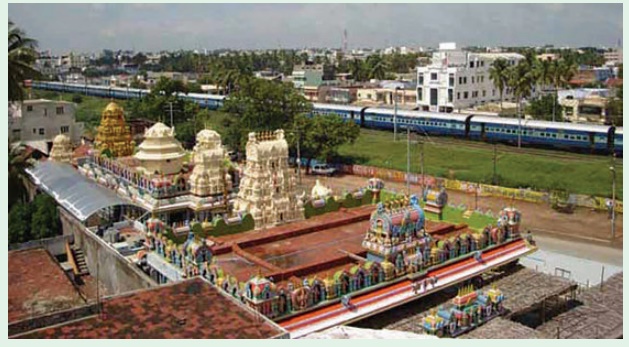 As per census 2001, it was decided that the core town or at least one of the constituent towns of an urban agglomeration should necessarily be a statutory town and the total population of all the constituents should not be less than 20,000 (as per 1991 census).

Urban agglomeration is a continuous urban spread constituting a town and its adjoining urban outgrowths (OGs), or two or more physical contiguous towns together and any adjoining urban outgrowths of such towns. Examples of Outgrowth are railway colonies, university campuses, port area, military camps etc. that may have come up near a statutory town or city but within the revenue limits of a village or villages contiguous to the town or city. With these two basic criteria having been met, the following are the possible different situations in which urban agglomerations could be constituted.

i) A city or town with one or more contiguous outgrowths.

ii) Two or more adjoining towns with or without their outgrowths.

iii) A city and one or more adjoining towns with their outgrowths all of which form a continuous spread.

A new concept that had been developed for the 1971 Census for the tabulation of certain urban data was the Standard Urban Area.

The essential of a Standard Urban Area are:

iii) The probabilities are that this entire area will get fully urbanized in a period of two to three decades.

The idea is that it should be possible to provide comparable data for a definite area of urbanization continuously for three decades which would give a meaningful picture. This replaced the concepts of Town Group that was in vogue at the 1961 Census. The town groups were made up of independent urban units not necessarily contiguous to one another but were to some extent inter-dependent. The data for such town groups became incomparable from census to census as the boundaries of the towns themselves changed and the intermediate areas were left out of account; this concept came for criticism at one of the symposium of the International Geographic Union in 1968 and the concept of Standard Urban Area came to be developed for adoption at the 1971 Census. If data for this Standard Area were to be made available in the next two or three successive censuses, it is likely to yield much more meaningful picture to study urbanisation around large urban nuclei.

Basis for classification of urban settlements

The definition of urban areas varies from one country to another. Some of the common bases of classification are size of population, occupational structure and Administrative setup.

In Indiathe size of population, density of 400 persons per sq km and share of non-agricultural workers are taken into consideration.

In India if more than 50 per cent of its economically productive population is engaged in non-agricultural pursuits.

For example, in India, a settlement of any size is classified as urban, if it has a municipality, Cantonment Board or Notified Area Council.

Depending upon the functionality of the urban settlement, towns are classified as Administrative Towns, Commercial Towns, Cultural Towns, Recreational Towns, and Industrial Towns.

The settlements that established for the administrative purpose or having largely administrative function are known as administrative towns. For example, Washington D.C., New Delhi, Canberra, Paris, Beijing, Addis Ababa, and London etc.

The settlements that facilitate commercial opportunities are known as trading and commercial towns. For example, Agra, Lahore, Baghdad as an important transport node; Manchester and St Louis in land centers; Winnipeg and Kansas City as agricultural market towns; Frankfurt and Amsterdam as banking and financial centers; etc. 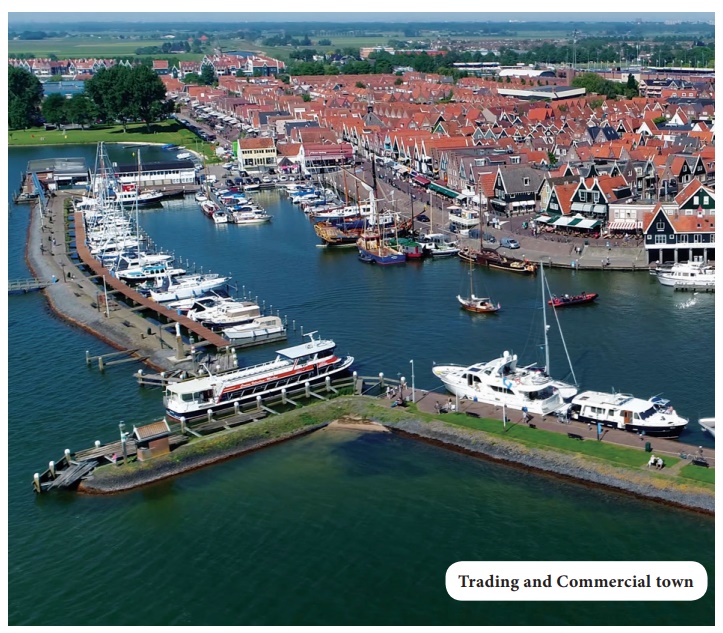 The settlements established because of religious adherence are known as cultural or religious towns. For example, Jerusalem, Mecca, Jagannath, Puri, Madurai and Varanasi, etc.

The settlements established for the recreational purpose are known as recreational towns. For example, Miami (U.S.A), Panaji (India), etc.

The settlements established because of industrial development are known as industrial towns. For example, Pittsburgh (U.S.A), Jamshedpur (India), etc. 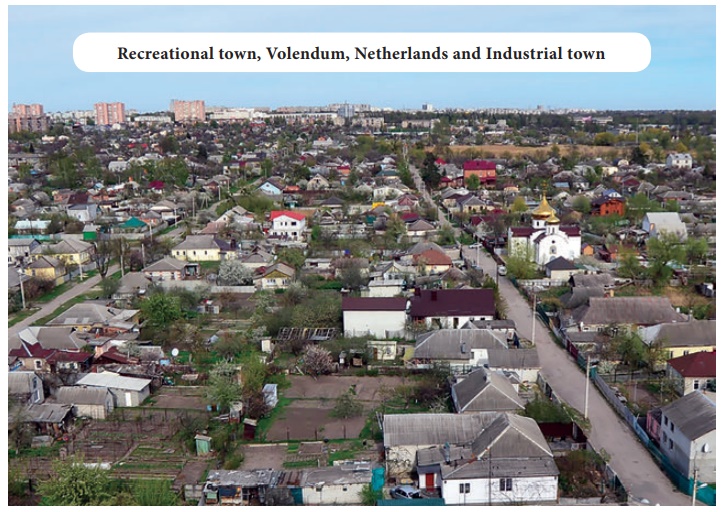